There is something ‘not quite right’ with the proportions. Sitting on a high base, it looms over the street even more than one would expect. Even odder is the fact that the base is there for effect it would seem as none of its neighbors are so equipped. The bays running unbroken from ground to entablature only enhance the overly vertical effect.

Detail from the Chace Cumberland County Map of 1857. Library of Congress

The house is also a survivor. Not just be virtue of its age, but also for the fact that the Great Fire of 1866 came to the doorstep and stopped.

Moses Gould was born in Portland in 1815. His father, also Moses, was a hatter on Fore Street. The family, Moses, Susan, & 6 children, lived above the shop. Our Moses attended local schools before apprenticing in Samuel Colesworthys print shop on Exchange Street as a teen. Once completing his apprenticeship, Moses stayed with Colesworthy for a while before joining his brother-in-law, Daniel Woodman, in a small foundry business in 1840.

Moses Gould claimed through much of his later life that the conditions in the foundry damaged his health. He, according to all accounts, was a somewhat sickly man for much of his life. By the middle of the 1840’s, Moses set his sights on a new career. In 1843, he purchased and sold a few properties on the slopes of Munjoy Hill. Over the next two years, he increased his activities so that, by 1846, he was advertising properties in the paper. In that year, he bought and sold over 20 properties. By 1850 he was buying and selling all over the Hill. He purchased the land for our subject, as part of a much bigger plot, from a merchant named Thomas Warren in December of 1851.

What Moses Gould built is a rectangle measuring 52′ on North Street and 36′ deep. It is 2 stories with a third in the garret. The main façade is broken into 4 bays with the 2 inner units being narrower and containing the entrances. The windows on both levels are tall and have granite sills and lintels. Although the grating on the windows in #79 is attractive and appears in all the 2nd story windows in the 1924 tax photo, I suspect the window and door treatments on #81 are close to the originals. The current garage on Melbourne Street is from after 1924. There was a stable there previously that may have been connected to the house although it may have just been a fence. See the 1882 map below for more details

In 1863, Moses Gould sold a half share of 79 North Street to the physician Eliphalet Clark. In 1865, Gould and Clark sold it to a ‘fancy goods’ merchant who had a store on the corner of Middle and Church Streets named Oliver Shepherd. Shepherd was born in Jefferson ME in 1818. He married Sarah Putney of Concord NH in Portland in 1851. Oliver must have done well in the trade as the 1870 census showed the couple as having $8000 of real estate along with $10,000 of personal property. It also showed they had 2 live in servants and no children. Interestingly, both of the servants were Black and both were from New Brunswick Canada. Could they have been descendants of Revolutionary War Loyalists?

Neither the steps nor the outer wall are original.

Moses Gould sold 81 North Street in 1887. He moved to Federal Street where he lived with his son Frank until his death in 1893. The purchaser in 1887 was the Maine Wesleyan Board of Education. This organization was linked to the Maine Wesleyan Seminary and Female College in Kent’s Hill. Eliphalet Clark and his wife both made substantial bequests in their wills to this organization. Maybe they played a part in the sale. The Board held title until 1903 when it was sold to Charles Lewis.

Charles Lewis purchased both sides of 79-81 North Street in 1903. He bought 79 from the Portland Savings Bank who had foreclosed on the Shepherds in 1886. Why the bank held the property for 17 years is something of a mystery. As is Charles E Lewis. He seems to have been from Scarboro but that is not clear. From his probate, I find his wife’s name was Lillian and they had a daughter named Ethel and a son named Alexander. His will was probated in 1923 and notes he was in Philadelphia at the time of his death although his wife, son, and daughter were here in Maine. In 1929 and 30, Charles’ heirs sold both sides of our subject.

in 1929, 81 North Street was purchased by a salesman named Travis Millard and a decorator named Gordon Taylor. Millard was a Maine native, and Taylor was originally from New Brunswick. The 1930 and 40 census list Millard as Gordon’s uncle but the history, what’s available online at least, doesn’t support this. Nowhere in either of Gordon’s family trees is there a ‘Millard’ and his mother’s maiden name was Fowlie. Were Millard and Gordon lovers? In 1946, they sold 81 North Street to James Malia. James worked as a longshoreman on the waterfront. In 1957, the Malias sold our subject to Louis and Esther Morrill.

The plaque above is in the center of the house at the second-floor level. I do not believe it to be original, but it appears to have been there in 1924. I can find no references to “Fairview Villas” in any newspapers or city directories. 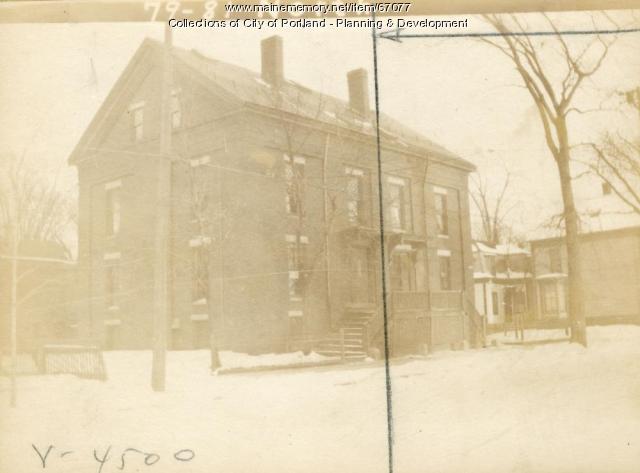 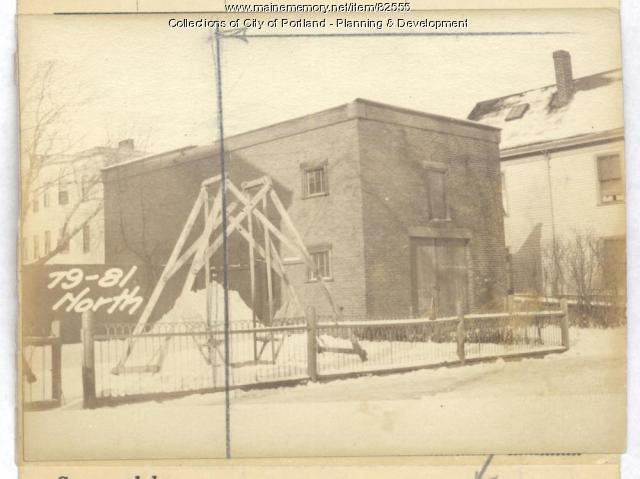 79 North Street was purchased in 1930 by Elvira (Elsie) Donatelli. Elsie was born in Lettomanopello Abruzzo Italy in 1881. She immigrated to the US in 1899 and married Joseph (Gio) Donatelli, also from Lettomaopello, in Portland in 1906. By the time of the purchase of our subject, they had 10 children including twins in 1919.  Gio worked as a mason. In 1936, their daughter Anna married James Malia who purchased 81 North Street 10 years later. Gio died in 1947 and Elsie in 1949. In 1951, their heirs sold 79 North Street to Nicholas and Myrtle Centifanti. Nicholas was a Pennsylvania native who worked as a longshoreman and janitor. He died in 1972 at the age of 59. Myrtle grew up in South Portland and worked as a welding instructor before becoming a quality control inspector for a bakery on Kennebec Street for 25 years. She sold the following year to the current owner.

79 & 81 North Street are both listed as single-family homes. Condition is very good for 79 and good for 81.