Built in 1870 by James Tenney for Clinton and Olive Jones

A substantial Second Empire in the West End neighborhood.

James Tenney liked decoration. He seemed to revel in it at times. From crockets to cabochons, brackets to sconces, and ribbons to ropes, he used them to highly expressive levels in his works. That being said, his work was never over the top and always showed a level of balance missing in some of the work of the later Queen Anne era. Tenney worked in a pretty tight area of the city that centered here on Cushman Street and extended onto Emery and Pine Streets. The lot for our subject, on the southwest corner of Cushman and Emery Streets, was purchased from James’ father-in-law, William H Stephenson, in 1870 for the substantial sum of $3000. James had married Annie Stephenson in 1858.

Clinton and Olive Nutter Jones were married in 1866. Clinton was born in Pennsylvania in 1838 and Olive in Maine in 1845. Olive’s parents, Ebenezer and Martha, were farming in Cape Elizabeth, now South Portland, in the area of today’s Nutter Road. Clinton was involved in the manufacturing and sales of boots and shoes. When our subject was built, he was a partner in Sawyer and Webb & Co. That firm dissolved and was replaced by W, B. Sawyer  & Co in 1881. That firm was dissolved in 1887. At some point, Clinton joined L. W. Payson and Thomas Cartland in Jones, Cartland & Payson Co which, in 1890, became Jones & Cartland. This partnership dissolved in June of 1891. Clinton worked independently until his death in 1902.

The bay windows showcase Tenney’s fascination with ornamental detail used to accentuate the basic forms of his buildings. The faces of the bays have quatrefoil appliques and the corners are faced with ribbon moldings. The window sill is a hefty unit with a deep projection and rounded face. The ribbon moldings from below are carried up the corners of the bays and turn to cap the bay faces. The upper parts of the windows are surrounded by half-round moldings that spring from what appear to be single candle sconces. Above all this is a truncated entablature that transitions into a strongly projecting cornice which is carried on brackets showing quatrefoil emblems. All of this ornament was available from a few different lumber and molding merchants in Portland at the time.

Clinton and Olive Jones had 4 children. Mary or Martha was born in 1867 and Purdy in 1868. Then, in 1880, Grace and Eben were born. Eben’s life was short and difficult. A brief note in the September 24, 1883, issue of the Portland Advertiser noted that Eben had fallen from a second-floor window and survived with bruises only. Eben died of bronchitis in June of 1887. Oddly, Clinton was granted guardianship of Grace and Purdy in 1895. Purdy would have been 27 years old by then and, seemingly, not in need of a guardian.

Clipping from September 24 1883 issue of the Portland Advertiser. Library of Congress.

In 1900, Clinton & Olive Jones purchased a lot in Loveitt’s Field. A new development in South Portland overlooking the shipping channel. They resided there for a short time before Clinton died in 1902. Olive died in 1904. In 1905, our subject house was passed to Grace, who had married in 1904 and moved to Montreal. Grace never lived in our subject. Alice Lord lived there and worked as a private nurse. Her relation with the family isn’t clear. I think she was Mary’s niece by marriage but am not sure. Alice had worked as a teacher in the Portland school system after graduating from Wellesley College. Grace transferred the property to Alice in 1920. Alice took in patients through the period from around 1910 until her death in 1936. 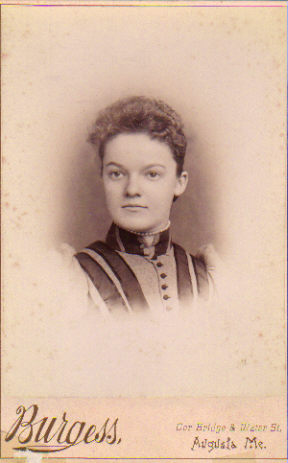 After Alice’s death, 50 Cushman Street was sold to Joseph LeGuennec. LeGuennec was a Catholic clergyman born in France in 1876. When he arrived in the US is not clear. He spent some time in Presque Isle around 1908/09, was in Jay from 1911 to 1916, and almost 2 decades in Old Town. He was listed as residing in Old Town when he purchased our subject. In 1938, he purchased a property on Danforth Street at which time he gave his residence as Sanford. The 1940 census shows LeGuennec living on Danforth Street with a housekeeper named Marguerite Bois. After his death, our subject was deeded to Marguerite. 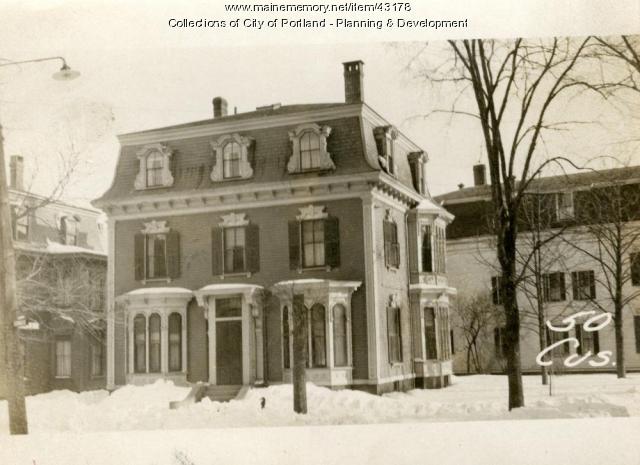 In 1940, Elise Nason, Nee Hanson, was renting 50 Cushman Street for $50 a month. She lived there with her partner Sadie Merril, her mother Marie, and 3 boarders, Delia Hichborn, Mary Thompson, & Helen Libby. All three women were elderly, the first two being widowed. In 1930, Elise was working as a live-in maid for Spaulding Bisbee. Also working for, and living on-site, was a Canadian gardener and widower named John Woods who was a widower with two daughters. He and Elise married in 1946 when they were both in their 60s. Elise had also worked as a live-in maid for Aurelius Hines in the 20s. Bisbee married Ethel Hinds in 1919. Elise died in 1962 and John in 1963.

50 Cushman Street is listed as a two-family home. The owners are a capital manager and his wife. Condition is excellent.