An eclectic double house on the corner of State and Spring Streets.

The 1850s were a ‘boom’ decade for Portland. The recession created by the Panic of 1837 had hit the city particularly hard and slowed growth dramatically for the first half of the 1840s. The arrival en masse of the railroads in the late 1840s kicked off a period of intense growth that would see, among many others, Commercial Street laid out, several new banks chartered, Middle Street become a regional hub for dry goods merchants and increased residential development in both the east and west ends of the city. 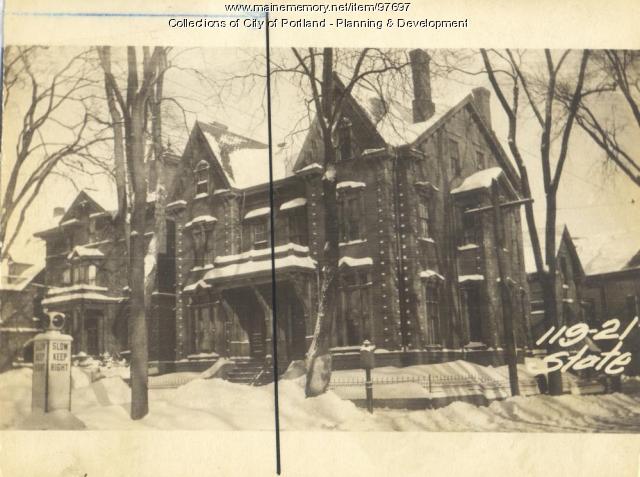 The harbor-side of State Street had seen spotty development since the 1820s with houses built here and there. When William Stephenson purchased the land for our subject, there was still open space on that side of the street, but for one house from 1840, all the way to the still relatively new State Street Church. 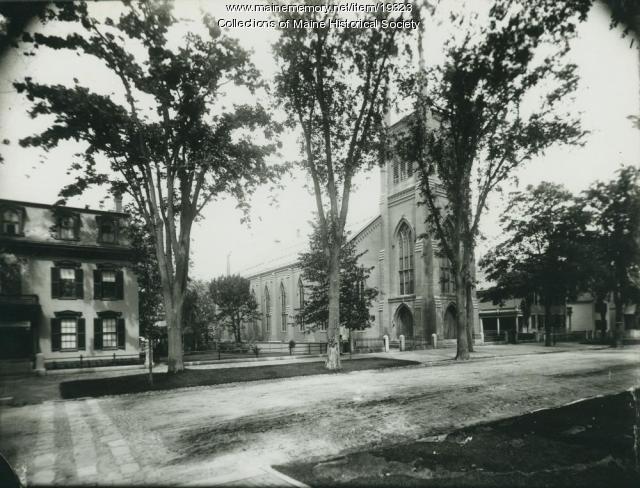 Stephenson made the purchase in August of 1852. He bought the land for $2100.00 from a mason named John Buzzell. Buzzell seems to have constructed something of a house on the sight as he reserved the right to “the buildings thereon and the bricks and stones making up the cellar walls of said buildings thereon. Also the privilege to enter the property to remove said buildings, bricks, and stones, at any time before January 1, 1853”.

William was born to Harriot and Henry Stephenson in Portland in 1810. Henry was a grocer who ran his business at the corner of Center and Fore Streets where there is now an empty lot. William married Alice Carter, the daughter of an insurance agent who lived on Danforth Street, in 1853. William worked as a clerk in a dry goods establishment prior to becoming the cashier for the Mechanics Bank in 1851-2. 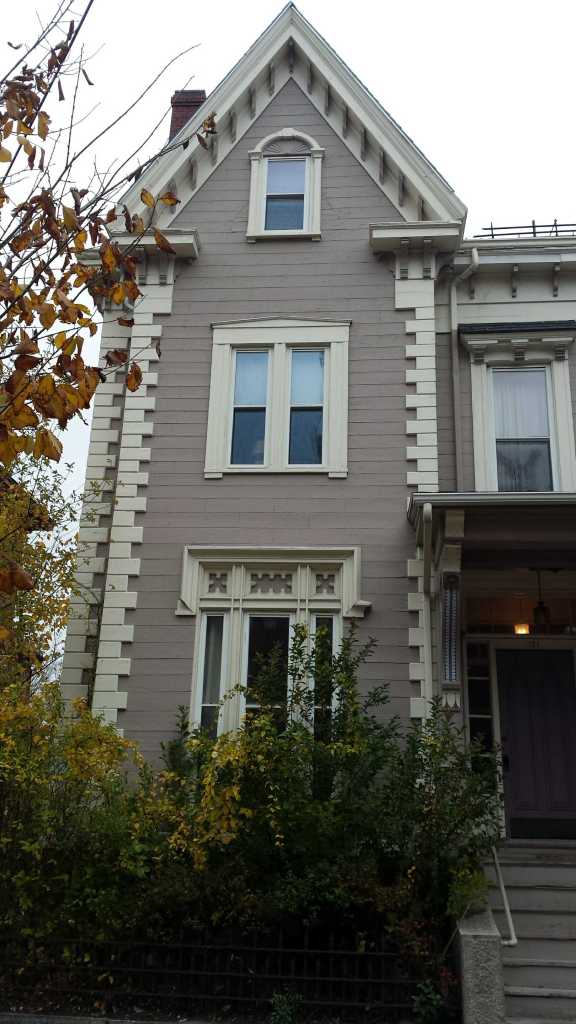 If William and Alice used the services of an architect there is no mention but there is some evidence to say they did. I am ‘on the fence’ on this one. There is a certain cohesiveness to the massing and an overall tendency towards dramatic verticality that speaks to the eye of a professional. But that is balanced by the detailing which is all over the place. We’ve got a Greek Revival entry with Gothic doors and Italianate brackets and Colonial/Italianate quoins, Gothic Revival treatments above the first-floor windows, and that funny little Colonial window in the garret. They wanted a bit of everything and they got it.

The gable ends have an interesting projecting bay that is square in plan and only 2 stories tall. The Spring Street side gives a good view of the narrowness of the first-floor windows. A note on the siding. I suspect the intention was to mimic stone by having the boards joined tightly or ‘matched’. It would then be covered with somewhat heavy paint that would have sand incorporated to increase the effect of stone. A wonderful effect but one that requires allot of maintenance to keep up.

William and Alice raised 5 children at 119 State Street. They were,

The 1880 census was William the younger’s occupation was ‘physician’. He was all of 25 years old. He joined the army as a surgeon in 1883. He retired as a colonel in 1919 after seeing service in the Spanish American and First World Wars. He died in 1932. Marion was working as a domestic servant for a family in New York City according to the 1880 census. She never married and lived at 119 State until her death in 1933. The same is true for Alice Maude. She died in 1945 and Henry, who died in 1943. Mabel died of heart disease in 1897.

As it is a double house and William’s family lived in 119, who lived in 121? William’s brother, Alexander Barr Stephenson, did. Alexander was born in 1834. He was 18 or 19 when the house was built so he may not have resided there at first. He purchased it from William in 1864. He married Maria Cushman in 1861, served in the Civil War, and was a member of the GAR. He would, after the war, found the A.B Stephenson Ship Chandlery on Commercial Street. In 1872 the only child he and Maria had, Alexander William, was born

The first-floor windows of the front facade have some fascinating details. They are quite narrow and tall and appear to spring from just above the floor line. They sit on simple, chunky, sills and are relatively unadorned. What decoration they have is quite unique. Simple, flat, wooden slats about 3/4″ thick by 1 1/2″ deep form the vertical and horizontal members of a geometric form. This has the effect of both delineating every element of the window in its own space and unifying all the elements into one singular object. This is capped with a panel with modified quatrefoil decorations. All of this is finished off with a very Gothic drip molding.

As noted, Alexander had married Maria Cushman in 1861. Maria’s father Alvan died that same year and Maria inherited a share of property on Emery Street several blocks west of our subject. In 1864 William purchased a portion of this property from Maria on the newly laid out Cushman Street. He would subdivide this lot then build and sell 3 houses on them. One of, 46 Cushman, was the subject of a post in November of 2017.

This is a double house a couple of blocks away from our subject. It sits at the corner of Winter and Pine Streets and was built by the Sparrow brothers, John and William, after 1858. But for details, it’s a near twin of 119-121 State Street. John and William had a brother Thomas who was an architect in Portland in the 1850s. If it seems likely, Thomas designed the house on Winter Street and it bears an incredible resemblance to our subject on State Street, it’s not that much of a reach to think he designed the house for William as well.

William Henry Stephenson died in 1882. He was buried in Evergreen Cemetery. His brother and neighbor Alexander died in 1898 a month before his only son Alexander William passed away. Alice and Maria Stephenson both passed away in 1903. 119 State Street would remain in the Stephenson family’s ownership until Alice Maude’s death in 1945. It is currently a 3 family apartment building owned by a family who lives in Arlington VA. 121 State would pass to the Cushman family on Maria’s death. They sold it in 1912. It would see many owners over the years including, for a brief period in the 1920s, the Cathedral Church of Saint Luke. It is currently a 3 family apartment building with the owners being residents.