A small Queen Anne in the Libby’s Corner neighborhood

First things first. The date proudly displayed upon the front facade may not be correct for the build date. 1895 does stand about halfway between the initial platting of the neighborhood in 1887 and Mary Rumery purchasing the property in 1904. Her deed does reference ‘buildings thereon’ so it would seem to be prior to that date but I cannot find any reference to the property in any documents at the registry of deeds prior to her purchase.

Mary Morse and Clarence Rumery married in 1888. He was 23 and she 20 years old. Clarence had grown up in the neighborhood. His father, Lauriston, was a local house builder . Mary’s early years, including where and to whom she was born, are unrecorded. The Rumerys had 6 children between 1889 and 1910. Clarence worked at a suspender factory on the corner of Middle and Pearl Streets until an accident in 1890 which left him “not seriously injured but for the loss of the skin on his right arm” according to the Portland Advertiser for October 1 1890. When he left after this is not clear but by 1900 he was a plumber working for JK Lynch Plumbing on Portland Street.

The current colors and details led me to think it was the work of Marks and Earle. It is not.

The house is a block measuring 23’x28′. It originally had a 5-foot deep extension off the back that was 16 feet wide. Since then, another 5′ x 16′ addition has been added to the rear. The siding is cedar shingles painted a deep blue and the white trim/details are all in the late ‘Queen Anne’ mode. It wasn’t always so.

You cannot accuse John and Philip Brown & Horatio Jose of being ‘unambitious’. The trio, along with several others, formed the West End Land Company in 1886 when they purchased a large plot of land in the ‘Libby’s Corner’ neighborhood of Deering from the estate of William Davis. They platted a huge development, much of which would never be built, stretching from Lassell Street to Huntress Street and all the way to the railroad and Thompson’s Point. Mary and Clarence paid $2100 for the house & property. They took out a mortgage on the property and by 1906 were behind enough for the West End Land Company to foreclose. The Rumerys were able to remain on the property and make payments. In 1912, the mortgage was sold to the Portland Terminal Company. The mortgage was declared paid in full in 1923. 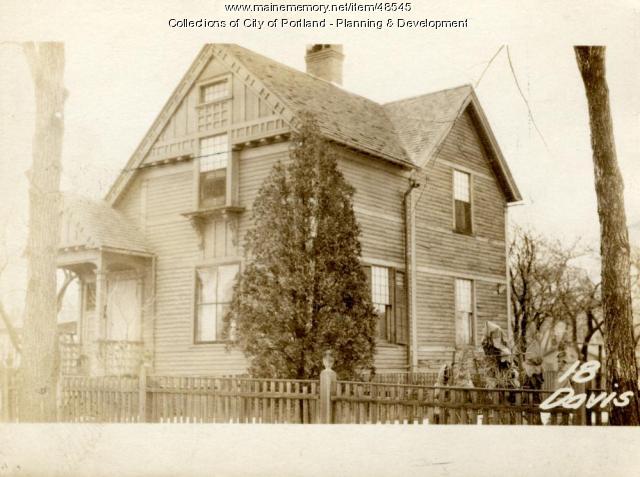 As noted, the house had a distinctly different character in it’s earliest days. Where today we have a fine Queen Anne style home the original was somewhat of a throwback for its day. With its clapboard siding tightly defined with straight elements that somewhat mimic the underlying framing and the applied decoration in the front gable, the West End Land Company built a house more in the Stick Style. The Stick Style was a predecessor of Queen Anne so there is a connection but by the 1890’s the later style had supplanted the earlier in most urban areas. Although it was looking a bit ‘long in the tooth’ in 1924, the quality of the design shows through.

Starting below the projecting window, we have heavy brackets holding an oversize sill. Between them was a panel of vertical slats on a flat background. The upper sash of the window was a wonderful 16 pane unit that lent its layout to the panel above. That panel fed into an attic window that looks to have been a 10 pane unit. All this was surrounded by a paneled gable of vertical units set on a base whose vertical elements mimicked the brackets below. All in all, a very well developed and executed design. Most of which is now, sadly, lost.

Clarence and Mary Rumery lived at 18 Davis Street through 1930. In 1930 Clarence noted that he was self-employed and had made $3000 in the previous year. By 1935 both had died although when that happened is unclear. In 1935, their heirs sold our subject to Alvin Strout, The deeds confirm the familial connection but give no reference to any wills. There are no wills or probate recorded for either Mary or Clarence. I cannot find any records of their deaths or burials. Clarence’s parents and two of their children are buried in Evergreen Cemetery but not the owners of 18 Davis.

Alvin Strout was an electrician for the Boston and Maine railroad. He grew up on a farm in Raymond Maine where he was born in 1903. He had married Hazel Hatt, who was also born in 1903 and grew up on a farm in Eas Deering, in 1927. They had 3 children prior to purchasing our subject in 1935. They did not remain there long as in 1939 they purchased a home on Pillsbury Street in South Portland. The 1942 city directory listed 18 Davis Street as ‘vacant’.

Alvin and Hazel sold our subject in 1944. The purchaser was Rose M Sylvester nee McGowan. Rose was born in Portland in 1916, grew up in the Riverton neighborhood, and worked as a stenographer for the Mutual Life Insurance Company of New York in the Masonic Temple building on Congress Street. She married a clerk from the same company named John B Sylvester in 1940. John was born in 1913 and grew up on Munjoy Hill. Rose and John transferred 18 Davis Street to their son John J Sylvester in 1975. John died in 1985 and Rose in 2003. John sold it to the current owners in 2003.

18 Davis Street is a single-family home. Condition is excellent.