Built on speculation in 1874 by Elbridge G P Smith

A funky Second Empire in the Parkside neighborhood

Mr. Smith really went to town on this one. You don’t often encounter convex Mansard roof forms in residential architecture. It is a shape mostly confined to governmental buildings like the Belvederes on the Customs House, and, less often, in commercial buildings such as the Woodman Block on Middle Street. Here on Avon Street, they are mashed together with concave Mansards on the ‘towers’ over the entries into one exuberant mass. 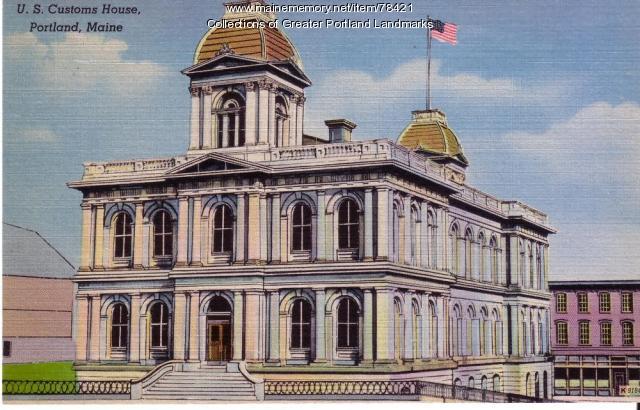 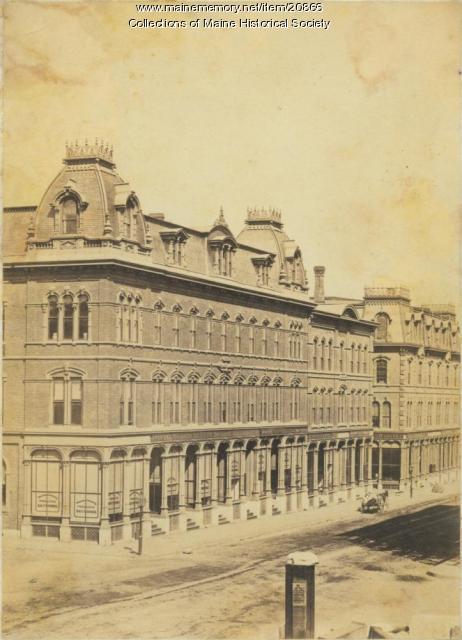 Elbridge Smith was a house carpenter in the city from around 1863 until he died in 1905. He lived for 10 years or so on Lincoln, now Lancaster, Street before moving to Diamond Island in 1874 to work as a carpenter on the military installation that became Fort McKinley. Our subject was his last speculative build. Smith purchased the land from the Deering family in May of 1874 and sold the new homes in November of the same year.

What our Mr. Smith built was a block 30′ wide on the street and 48′ deep. The building expands to 44′ wide at the point of the towers. 46 Avon now has an 8′ x 15′ single-story addition on the rear that does not appear to be original. There is a party wall, with chimneys, separating the two units. A pair of bay windows mark the front rooms with paired windows under compressed-arch dormers above. All of the first-floor windows, especially the bay windows, and the porticos are quite tall and suggest first-floor ceiling heights of 9′ or more.

The first 44 and 46 Avon Street residents were a widow named Emeline Senter and a hairdresser named John Pike. In something of a departure for the time, the amount paid for the properties is not specified but says only “the value received paid”. Hmmm.

Emeline Senter was the widow of Timothy Senter. They were both from the Portsmouth area. Timothy was an educator who became the first head of what is now Dean College in Franklin MA. After Timothy died in 1872, Emeline and 2 of her adult children, J Hoover, and Emma, came to Portland to live with another son, William, who was working with his uncle, also named William, as a watch and instrument maker on Exchange Street. 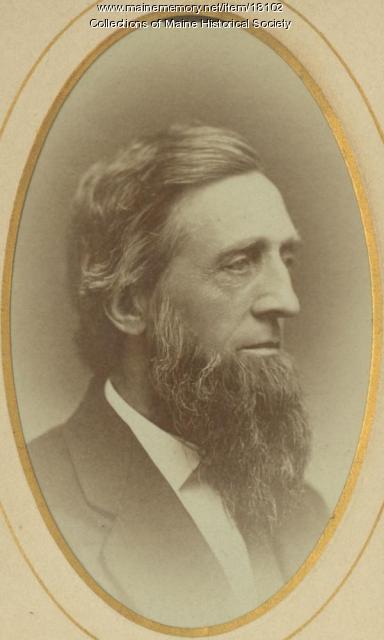 John B Pike had been a hairdresser in Portland for over 20 years when he purchased 46 Avon Street in the Autumn of 1874. Pike was born in Buxton in 1830. He came to Portland in 1852 and opened his first shop in Market Square in the same year. When the new Falmouth Hotel was built after the Great Fire, John moved into a new shop on the Union Street side of the hotel at #7 Union. He opened a public bath there in 1870. John married Ellen Dyer in 1857. Their only child, Ellen, was born in 1859. The Pikes lived on Elm Street for many years before moving to our subject.

The Falmouth Hotel on Middle Street showing John Pike’s barbershop at 7 Union Street on the 1886 Sanborn Map. Library of Congress.

The land for Avon Street, and Place, was part of the Deering lands. In the few years after the Great Fire, much of Deering Street had been platted and sold off. In January of 1871, they platted the land bordered by State, High, Cumberland, and the rear of Deering Streets. Much of what is now Avon Place was developed as stables and carriage houses. Here along the west side of the street, intended to be called “Court”, they platted a group of lots that now carry 44, 46, 48 & 50. The original lot for 48 & 50 included the land that is now. 458 Cumberland Avenue.

The towers over the porticos are a bit more ‘traditional’ with their bracketed overhangs, deeply curved roofs, and projecting dormers. The windows on both levels have been replaced and substantially altered. In the dormers, the shape of the original arched windows is apparent above the new window. On the second floor, the news is not so good. Gone are all of the trimmings of the old window. All that remains is the opening which is now totally out of scale. The vinyl siding guys sold the property owners on fake shutters (shudders) where they would never have been to add insult to injury. A win for the remuddlers. 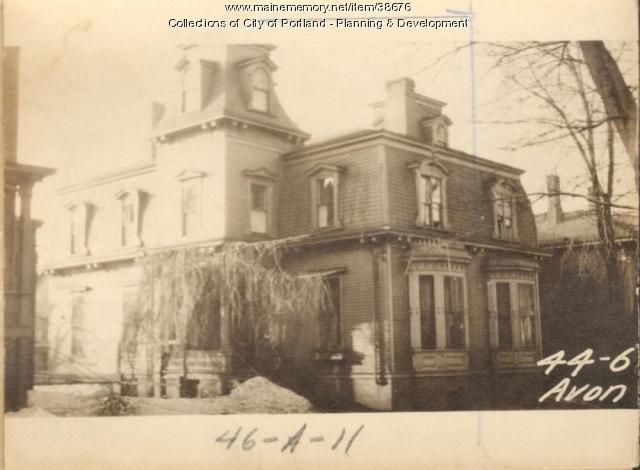 Emeline Senter died of ‘old age’ in 1900. Her will deeded 44 Avon Street to Emma Senter. Emma remained here with J Herbert through his death in 1922 until she sold in 1933 and moved to Portsmouth New Hampshire where she died in 1937. The purchaser was her niece, Annie Senter Jenkins.

John B Pike died in 1904. After his death, 46 Avon Street was rented to various people including a stereotyper named Charles Wish, a hairdresser named Elmer Brown, and a widow named Laura Files. For unknown reasons, John Pikes will wasn’t executed until 1917 when 46 Avon Street was sold to a hairstylist, (see a pattern here?), named Kathleen Crabbe. Crabbe was born in Canada around 1883. She immigrated to the US in 1907. By 1910, she was in Portland, cutting hair on Congress Street, and boarding on Wilmot Street just below Cumberland. She lived in our subject for a few years before she left town and left the property empty. In 1937, Kathleen, now a widow with the last name of Fessenden and living in Bridgton, purchased 44 Avon Street from Annie Jenkins. At that time, 44 Avon was occupied by a mechanic for a shoe shop named Harry Morse and his wife Beryl. 46 Avon was vacant. The Morses ran a boarding house out of 44. In 1940, they had 7 lodgers.

The Morses were not alone. The 1940 city directory listed 44, 46, & 48 Avon Street as boarding houses. 46 Avon Street was run by Iya McNaughton and her granddaughter Harriete Corey. They had 8 lodgers in 1940. The story was much the same for most of the ’40s with different people running the operations. In 1942, Herbert Morrison was running 44 and Fannie Wish was running 46. Herbert Morrison worked as a guard at the South Portland Shipyards and assisted his wife Gertrude in running the house. They were from Van Buren originally. Fannie was the widow of Charles Wish. They were married in 1900 and had one child who died young. Fannie died in 1943.

In 1947 Kathleen Fessenden Kneer sold 44 & 46 Avon Street to Mary J Macneill. Macneill was born in Springhill New Brunswick in 1884. She came to the US in 1898. She lived in Bangor for many years before moving to Portland after her husband’s death in 1935. She lived on State Street just off Longfellow Square and took in a few lodgers. Mary sold 46 Avon Street to Frances Davis in 1947. She sold 44 Avon to Clyde Esty in 1949. 1949 was also the year Frances Davis sold 46 back to Mary Macneill who then sold it to one John O’Toole. In 1952, John purchased 44 from Clyde Esty.

John J O’Toole was born in Portland in 1897. His parents were Irish immigrants. He grew up on Washington Avenue. He married Annie Burke in 1923. He worked for many years for the Maine Central Railroad. They had 2 daughters. They lived in 46 and rented 44 Avon Street. The family owned both properties until 1989.