A large Italianate double-house in the Deering Street Historic District.

This story is a bit unlike the standard fare. Whereas we would usually focus on who owned and lived in 15-17 Deering Street, this time we are going to look at the people who built it. They played a significant role in the creation of the Portland we know today and their stories deserve to be told.

The Portland Historic Resources Inventory (PHRI) of 1976 states that our subject was built in 1870. A deed from August 9 of 1870 in which Caroline Weston sold what is now # 15 to Simon Libby states the building “now being erected” confirms this. In something of a game of catch, Caroline Weston purchased the land from Walter Hatch of Augusta and Simon Libby in 1869. Hatch and Libby had purchased it from the Preble heirs in 1867.

Although there is no attribution in the PHRI, I’m going to say the design came from the office of Francis Fassett. The overall massing and verticality of the composition are very much in his oeuvre. The compressed arch over the projecting center bay would seem to draw some inspiration from Charles Alexander’s design for Samuel Spring on the corner of Danforth and Emery Streets. Eagle eye readers may note that the 3rd story windows in the center bay and #17 have been substantially enlarged, throwing the symmetry and strong tripartite organization in the bin and earning the ‘remuddling badge.

Simon Henry Libby was born in Richmond Maine in 1825. His father, also named Simon, was originally from Scarborough. His mother, Phebe Webb Libby, was from Westbrook. Simon was their 6th child. His early years are unknown. In 1847, he first appears in a city directory living on Spring Street and working as a ‘joiner’. When the 1850 Census was taken he was living on Winter Street between Spring and Pine Streets. He moved around a few times during the 1850s. It’s possible he was living in newly finished houses while building the next. He built John Munger’s Venetian Gothic home at 209-211 State Street.
In 1860 he married Clarissa Ellen Merrill in Lawrence MA. They moved from Winter to Henry Streets then back to  Winter in the 1860s. In 1867, Harry Merrill Libby was born. When the 1869 city directory was compiled, Simon was no longer listed as a joiner/carpenter but was a partner in the lumber firm of Libby and Goodhue which was on Commercial Street where the parking lot for the Fish Pier now sits. He was still building houses as his name is connected to several in the same neighborhood that were built after our subject.

The building is 46′ wide on the street and stretches 41′ back into the lot. Although the primary facade is mostly symmetrical, the side porch for #15 throws a bit of imbalance into the composition. A requirement no doubt of the Westons who retained ownership of this side after selling the other side to Simon Libby.  The overall design is very formal with quoins on the first floor corners and paneled pilasters on the floors above. There is a strong, flat, belt course of stone at the level of the first-floor ceiling with a thinner course at the second-floor window sill line. A built-up, brick, string course cuts through the middle of the third-floor windows. The architrave is abridged with a complete dentil molding but no frieze to speak of. Modillions line the deeply projecting cornice.  Window trims are pretty standard fare for Francis Fassett at the time. as is the portico. 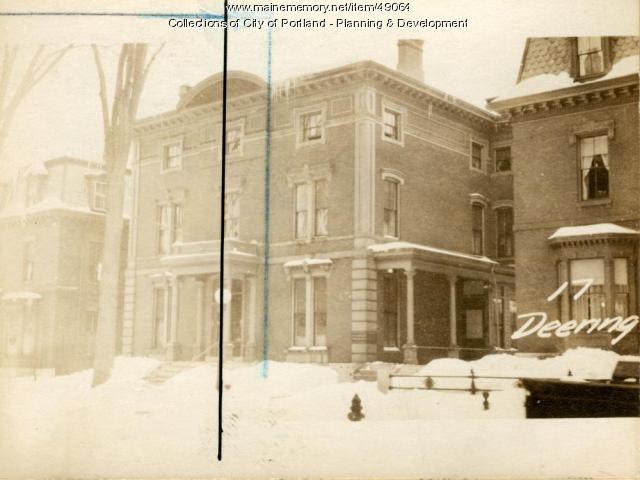 Samuel Amos Knight was born to Samuel and Jerusha Knight in Otisfield Maine in 1825. His father was a mason and he followed into the trade as well. Samuel married Elizabeth Green, a minister’s daughter from Norway Maine, in February of 1851. When Samuel and Elizabeth moved to Portland isn’t clear but when their daughter, Emma, was born in July of 1854, they were living in the city. Samuel appears in the city directory and registry of deeds in 1856. In that year, he purchased land on Parris Street from a mason named Eben Whitehouse. The Knights would live the rest of their lives on Parris Street.

The right side of the steps might qualify as a ‘trip hazard’.

Thomas and Caroline Weston were married in 1862. It was his second marriage, his first wife dying in 1862. Thomas was a wholesale merchant. They had 5 children. One died of the mumps at age 15 and one of consumption at 20. Thomas died in 1889 at the age of 72 from heart failure. Caroline remained at 17 Deering until 1899 when she sold it to Enoch and Sarah Foster. Caroline died of diabetes in 1902. 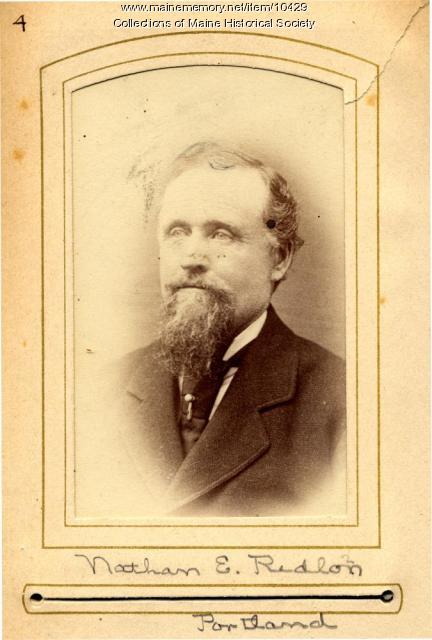 Nathan Elden Redlon was born to a shoemaker in Buxton in 1830. A relative named William was a mason and Nathan may have learned the trade from him. Nathan moved to Portland in early August of 1850. His move seems to have taken place around the 10th to the 15th as he appears in the Buxton census taken on August 9 and the Portland census for Ward 5 taken on the 16th.

In 1854, Nathan Redlon moved to Biddeford and soon after set out for Kansas to make his fortune. His timing couldn’t have been much worse. He moved onto what is now St. Paul Minnesota where he stayed until 1858 when he returned to Portland. He worked as a journeyman mason with Sewall Chase for a few years before becoming a foreman. In 1866 or 67 he formed a partnership with Samuel Knight, William Green, Albion Blackstone, and Alvin Jordan.

Clipping from the Jan 24 1870 edition of the Portland Daily Press announcing Nathan Redlon’s ‘retirement’ from the firm of Knight & Green. Library of Congress

Nathan left that partnership on January 1 of 1870. he then started N E Redlon Mason which would go onto build some of the city’s best-known 19th-century buildings including Maine General Hospital, the Thomas Brackett Reed house, the power plant for the Portland Railroad Company,  and the Maine Eye and Ear Infirmary. Nathan married Alsadania Cushing in Buxton in 1856. They had two children, Frank and Henry before her death in 1863 of consumption. Henry died of typhoid in 1865. In 1866, Nathan married Sarah Files, the daughter of the boarding house operator where he stayed when he first came to the city. They had no children.

These posts and the attached fence once graced the sidewalk for the walk to the rear of #17. They were, no doubt, removed to create parking. Sad, as they looked quite attractive.

In June of 1878, Simon Libby sold 15 Deering Street to a Master Mariner named John B Blethen. The next month, John Blethen transferred the property to his wife, Persis. Persis sold it to Harriet Pope, Caroline Weston’s mother soon after. Harriet sold 15 Deering to Emma Gerrish in January of 1889. Gerrish sold it to a hat maker named Alphonzo Gilkey in July of the same year. Gilkey was a longtime resident of Winter Street and never lived here.

Nathan Redlon was very active in politics. He was a longtime member of the Republican party and served on the common council for several years. He was elected to the Maine House in 1881 and 1882. As was common for the day, he was a member of several fraternal organizations including the masons, imagine that. He was also a longtime member of the Maine Charitable Mechanics Association where he served as its president. He was also the president of the Casco Carbonized & Cement Pipe Company.

15-17 Deering Street on the 1882 insurance map. Library of Congress

15-17 Deering Street is currently listed as an 11-20 family apartment building. It is owned by a family real estate holding company. The condition is very good.