A handsome Italianate in the Western Promenade Historic District

They went West.  Augustin and Abbie Gamage purchased the land for 45 Thomas Street from George Cushman in 1865. At the time Augustin worked as a clerk in an oyster restaurant. He was born into a farming family in Anson Maine in 1836. Abbie was born in 1839. Possibly in the Minot/Mechanic Falls area but this is not clear. The Gamages were married in 1860. They moved into our subject in late 1866 and sold the home in October of 1867.

Advertisement for an oyster and chop house from the 1873 city directory. Author’s collection.

In 1870, the census found them in Harrisburg PA where he was working as a clerk in a grocery store. By 1880, they were in Auburn Maine where Augustin was farming. In 1900, they were in the South Central District of Los Angeles where he listed his occupation as ‘miner’. He died there in 1923 and Abbie in 1927.

The house is a handsome thing. It’s based on the classic ‘East Ender” with a bay on one side and the portal on the other. It is a bit bigger than the ‘standard’ model this difference being most notable in its width. It’s still fairly narrow and deep befitting its similarly shaped lot. Of course, the use of brick sets it apart from the ‘average’ East Ender as does the bracketed architrave, double round-topped windows of the third floor, and compressed arch over the second-floor window. 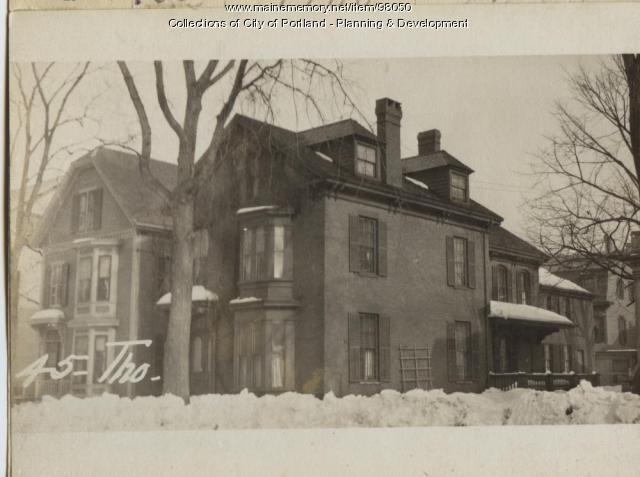 When Augustin Gamage sold 45 Thomas Street in 1867, the buyer was Jane A Evans. Jane’s husband, Henry, was the bookkeeper for a commercial merchant named Edwin Churchill &  Company based on the Portland Pier. The Evans had 4 children, Mildred, Jennie, Edwin & Adelaide. The Evans family sold our subject in 1871. The purchaser was Henry Beatley. Beatley worked as the superintendent of the Portland Water Company on Plum Street. Beyond that, not much is known. His first purchase was 45 Thomas on which he took two different mortgages. One he discharged. The other, not so much. Between 1871 and 1875, he bought and sold several properties and took 4 other mortgages besides the 2 on the Thomas Street house. In 1876, it all collapsed. In February of that year, the Portland Savings Bank foreclosed on the note it held for 45 Thomas Street. On December 26, 1876, Henry was declared bankrupt and insolvent by the US Court.

The main section of the house is 2 stories with a third in the garrett. There is a two-story brick ell with a wood-framed ell off that. The image below shows the basement windows have been removed and the openings filled but the large lintels were left behind. The filling work was not matched with the existing masonry and the pointing is far too bright. Hence the ‘Remuddling’ designation.

Who resided at 45 Thomas Street during the time the Portland Savings Bank owned it is not documented. The bank sold the property to Clara Briggs in November of 1882. Clara’s husband, Herbert, was an attorney with an office on Exchange Street. They had married in 1880 and had one daughter, Clara, in 1883. The Briggs sold 45 Thomas Street to Clarice Seiders in 1894.

George and Clarice Seiders were married in 1875. George grew up in Warren. He was an attorney who served in the state Senate. Clarice grew up on a farm in North Yarmouth. They had 3 daughters and a son. The 1900 census listed George, Clarice, Grace, Mary, & Philip along with Clarice’s sisters, Olive and Acsah, living at 45 Thomas Street. Philip died in 1908. The eldest, Grace, married a physician named Philip Davis in 1913.  George died in 1915 and Clarice in 1934. When she died Mary and Grace inherited 45 Thomas Street. Mary lived there and taught music. On Graces’ death in 1951, her daughters, Mary and Katherine, inherited her half of the ownership of our subject. In 1959, Mary the elder deeded her share of 45 Thomas Street to Mary and Katherine. Mary the younger then deeded her share to Katherine and her husband Walter Wilcox. 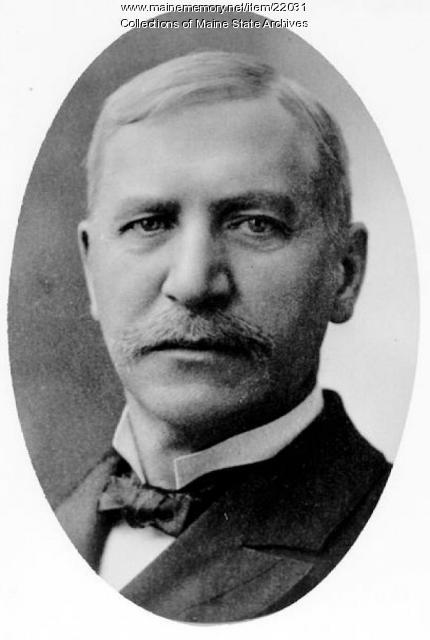 In 1963 the Wilcox’s sold 45 Thomas Street to a Portland Fireman named Samuel Marcisso and his wife Jacqueline. Samuel’s parents, Samuel and Alice lived at 53 Thomas Street. The Marcissos sold our subject in 1965. The next owners were a couple from Windham named Gerald and Jewell Mundy. They sold the property to a George W Crockett in 1968. Crockett had grown up in Yarmouth. He and his wife Jan lived here with their two children until 1983.

The bay is pretty straightforward with little in the way of extraneous details. The pilasters dividing the windows are quite chunky and have odd ‘capitals’ that are inset and have a strongly projecting molding at their base. The diminution in the size of the second-floor bay is striking. A small amount of decrease in size is common but this is substantial. why this would have been done is not clear. Both levels of the bay are topped with fully detailed cornices.

45 Thomas Street is listed as a two-family property. The condition is excellent. The owner is a well-known publisher of textbooks and other academic works.