Built for a well known local retailer and designed by a new name in our catalog of architects.

Louis R Porteous was born in Connecticut to Scottish immigrant parents in 1883. I have yet to find much information on his early years but by 1924 he was successful enough to build his own home in the fashionable neighborhood of Portland’s West End.

Set on an elevated site and presenting a tall gable to the street, the house seems to loom over the curb. The materials, random ashlar stone, and English Country style are not at all common in the area. I think the owner and his architect, James P Thomas, looked back to the Porteous heritage in Scotland for inspiration. 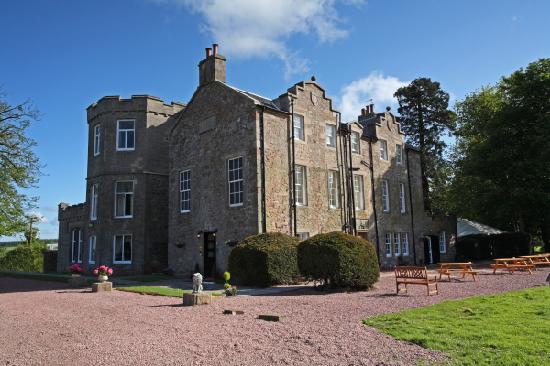 The house is composed of 2 blocks, a square unit crossing a rectangular unit. The massing is fairly conventional with the 2 segments crossing at the center of the rectangle. The entrance is an inviting rounded form tucked, one could say lost, in the southeastern corner of the crossing.

The architect, James Pickering Thomas, is a new name for the blog but this is not his first work we have seen. Thomas was the architect for Sheldon Pickering’s home at 4 Orchard Street. I am sure the shared name of Pickering is no coincidence. Thomas was the grandson of William Widgery Thomas, a well known Maine statesman.

James Thomas entered the Harvard School of law but moved to the School of Architecture from where he graduated in 1909.  He started his career in Boston before moving back to Portland in 1919.  Thomas was very active in Maine architecture up to his death in 1944.  We will be seeing more of his work in the future. The Porteous family would remain in the family until Louis’ death on  February 8, 1966. With the house being deeded to Cynthia Rich on July 9.  The home changed hands again in 1969 before being purchased by the current owner in 1973.