As we have seen in previous posts, the economic boom following the end of the Civil War and the devastation of the city’s old core by the fire of 1866 drove residential growth in both the east and west ends of the city. 46 Cushman Street, in fact, all of Cushman Street, is a part of this growth.

The form is fairly common. 3 bays wide and deep, 2 stories with a third under the mansard. The rearmost bay projects about 4′ from the structure on both sides of the building. There is a rear service ‘ell’ that is almost as wide as the main block. Details are for the most part common for Mansard houses in the square-cornered bay window and round-topped dormers. There are some very unique features which we will look at further on.

William Henry Stephenson was a stock and bond broker and dabbler in real estate. He lived in a grand Gothic Revival home on State Street and we will save his story for that house. William acquired the property for our subject from his sister-in-law, Maria, in 1864. Maria Stephenson had inherited most of what is now Cushman and Lewis Streets after the death of her father, Alvan Cushman, in 1861. The segment Wiliam acquired at that time encompassed what is now 42, 46 & 50 Cushman Streets.

The record is not clear on if Stephenson built the house ‘on spec’ or if he built specifically for the purchaser, Charles W Pickering. Given the ‘exuberance’ of the detailing, my guess is on built for the customer. The historic resources inventory credits a James Tenney with building several mansards along Cushman Street but not our subject. Given the location, style, date, and details, it’s very likely Tenney built this house as well.

Charles W Pickard was 35 years old when he purchased 26, using the 1870 Street numbers, Cushman in 1869. He was born in 1834 and graduated from Bowdoin College in 1857. In 1860 was living with his brother Edward on Munjoy Hill and clerking at the family newspaper, The Portland Transcript. He married Henrietta Groth in 1862. ‘Etta was born in Hanover Germany or Prussia as it was then known, in 1840. Her family had immigrated to the US in 1843.

Advertisement for the Portland Transcript from Beckett’s Portland City Directory of 1870.

By the time they moved into their new home, Charles and Etta had a son, George, who was born in 1863. They would have 2 more children, Frederic in 1871 & Cornelia in 1878. They would remain in the house until the turn of the century. When they actually moved out is a bit of a mystery. The deed selling 46 Cushman to Frederick Harford is dated 11/20/1902 & it gives Charles’ residence as Portland. Charles, Etta, and Cornelia have two census records for 1900. An entry showing them at our subject has been crossed out and a notation directs the viewer to another entry showing the family living in South Portland. Charles died in 1908 and Etta in 1922. They were buried in Auburn.

The entry ‘stack’ is fascinating. It’s a pastiche of decorative bits and odd joinery. The brackets holding the roof above the entry are fairly standard but the engaged, short, colúmns below are insanely turned and rest on tall paneled plinths with a diamond motif. Behind these brackets are another, smaller, set of brackets perpendicular to the large ones. They support the second story ‘room’. Note how the space between the rear brackets gently flares to match their profile. This ‘flairing’ effect can be seen at the roofline above the second story where it has a corbelled effect.

Advertisement for the Portland Transcript from Elwell’s Portland and Vicinity of 1876.

Frederick H Harford was a municipal judge in South Portland until the day before he closed on 46 Cushman. He resigned on the 19th of November 1902 & closed on the 20th. We can surmise that residency in South Portland was a requirement of the position and he was no longer a resident. He was born in South Portland, then Cape Elizabeth in 1850. He married Fannie Merrow of Portland in 1872. They had two children, Charles, born in 1876 & Fannie, born in 1888.

The entry itself is unique. Engaged columns on simple plinths and a simple architrave frame a stained glass transom and some fascinating doors. They are paneled but the frames of the panels are grooved or fluted. The intersections of the frame sections are accentuated with square blocks with ‘bull’s eye’ detailing on all but the panels at eye level which have simple square blocks. An arrangement I have never seen before.

Fred Harford practiced law in Portland almost until his death in 1914. Fannie would remain at 46 Cushman until 1917 when she sold it to Mary McTernan. Mary transferred it to Sarah Gillen on the same day she bought it. There seems to have been a connection between the two women as the 1910 census shows Sarah as a live-in servant for Malcolm Hammond and Mary as a border there. They both listed Ireland as their place of birth. Sarah immigrated in 1868 & Mary in 1897.

Sarah Gillen sold 46 Cushman Street to John J Silva in early November of 1917. It would remain in the Silva family for the next 43 years. John was born to Joseph and Joanna Silva on February 1, 1873. Joseph was a Portuguese-born fisherman who immigrated to the US in 1860. He married Joanna Shuman in 1867. Joanna died in 1880 at 30 years old. They had 9 children of which 5 were living in 1900. John J married Elizabeth Twomey in 1902. They would have 7 children, and one adopted child, of their own by 1930. 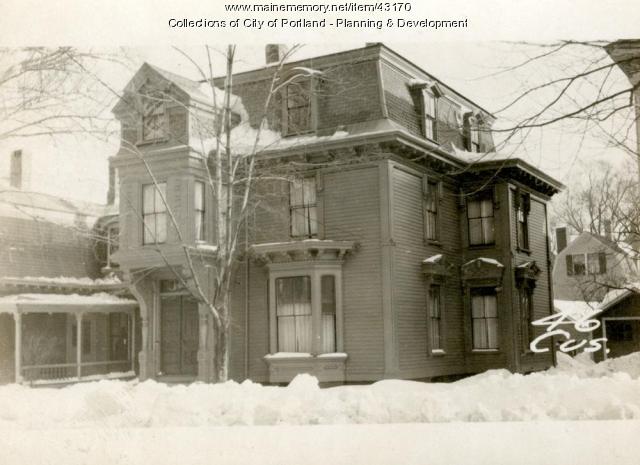 John was a manager at a cooperage business. Which one that was I have not determined. He registered for the draft in WWI but did not serve. He died in 1948 at which time his estate passed to Elizabeth. She transferred 46 Cushman to their youngest daughter Marjorie in 1953 and passed away in 1963. John, Elizabeth, his parents, and 5 of their children are buried in Calvary Cemetery in South Portland. Marjorie sold the home in 1960.

Some of the windows on the main block have a hood detail that matches the entry in complexity and uniqueness. A heavily turned and incised, engaged ‘drop’ starts the hood just above the level of the parting rail. This carries a flat pad that is rather thick from which the elements of the hood spring. Those elements are starting from the window and working out

All in all, a very complex molding that creates a myriad of shadows. Above the upper windows is an architrave with rope molding and a diamond stud strip as primary elements.

The home would see the usual ebb and flow of ownership over the next 30 years with owners including the former Mark Stimson Associates Realtors. By the late 80’s it was owned and operated by an apartment management company. In 1993 the property was foreclosed on by Peoples Heritage Bank. The bank sold it to a couple from Scarborough who in 2002 sold it to another property management company. That company, which no longer exists, converted the home to condominiums and started selling them in late 2002. There are 4 units in the building.