Moses Foster ran a dye house on Oak Street when he purchased a plot at the corner of Park and Spring Street from the Emery brothers, John A and Hannibal, in 1897. The lot was narrow and long and abutted Park Street Row. Moses built a townhouse on the Park Street end in which he and his family lived. He then carved out a 1300 square foot lot off the back and built our subject on it.

It’s an interesting structure. The overall rectangular shape is common for Portland but the proportions and the use of brick instead of wood are unusual. The double belt course really emphasizes the horizontal lines, perhaps too much, of the building. The mild arching of the window headers do nothing to soften the horizontality of the belt course in fact they seem to highlight it. The roof of the bay is also poorly served by the belt courses as they tend to draw the eye to that roofline and it’s not all that graceful.

Frank W Edwards purchased the home from Moses upon its completion in 1900. Frank was a traveling salesman who was born in Belfast in 1851. He married Minnie Kellock, also a Belfast native-born in 1862, in 1884. They had one child, Frank Jr, who died in 1892 at 2 days. Where they lived at that time, and up to 1900, is unknown. They would live on Spring Street, quietly it seems, until May of 1909 when everything came apart.

On the 12th of May, the following appeal was filed with the Probate Court for the county.

To the Honorable, The Judge of the probate court in and for the county of Cumberland:
Respectfully represents Edwin F Vose, of Portland, in said county, that Frank W Edwards, a resident of Portland, in said county, is a person who by excessive drinking, gambling, idleness and debauchery has become incapable of managing his own affairs and who so spends, and wastes his estate, as to expose himself and his family to want and suffering, and his town to expense.

Edwin F Vose was a local physician and politician. He seems to have made an effort that was well-meant but, as we shall see, was too little and it was all far too late.

On May 25th, Minnie died of ‘chronic nephritis‘.
On June 9th, Frank died of unknown causes.
They were buried in Belfast.

Frank’s nephew Albert inherited the property as the next living relative. He was a Belfast resident and does not appear to have occupied the home. A city directory for 1910 has the house listed as ‘vacant’ and all of the 11 mortgages he took against the property, all from Belfast National Bank, gave his residence in said town. Albert sold the house to Amanda Oliver of Calais Maine in 1917. 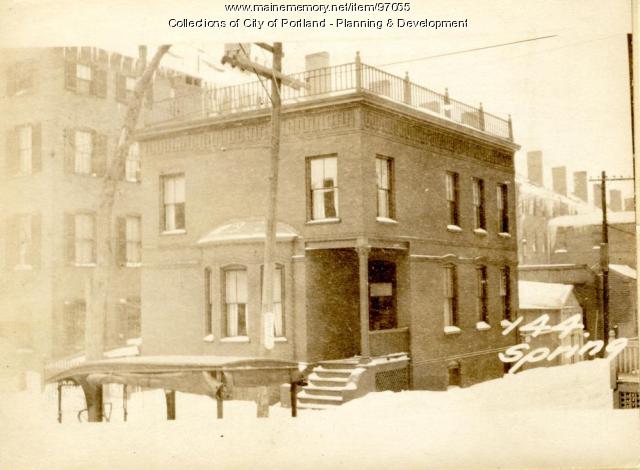 What’s with the balustrade? The overly colonial style of said balustrade is apropos of nothing on the exterior. Placed above the well proportioned, if a bit overscale, greek key of the frieze and you have one serious mash-up.

As noted, Amanda Oliver was a resident of Calais and does not appear to have lived in the house but her sister Annie and her husband Fred did. When Amanda died in 1925, she passed it to Annie and Fred. They sold it in 1930 to Edwina E Mower.

Edwina Everette Mower was born in St Albans Maine to Edward and Nettie Mower in 1891. Edward passed away 7 months after her birth. She grew up on the family farm with her mother, sister, and 3 brothers. Her paternal grandparents lived just down the road. In 1910 she listed herself as a school teacher in St Albans and was living at home. In 1918, she signed up to be a stenographer, she was working in the field in Auburn at the time, for the Red Cross. She was issued a passport as seen in the photo above. She was 5’6″, had blue eyes and light brown hair. She was in Rome until September of 1919. In 1921 & 22, she traveled through Northern Europe to Latvia and Estonia with Jessamine Fenner who was an official with the YWCA. 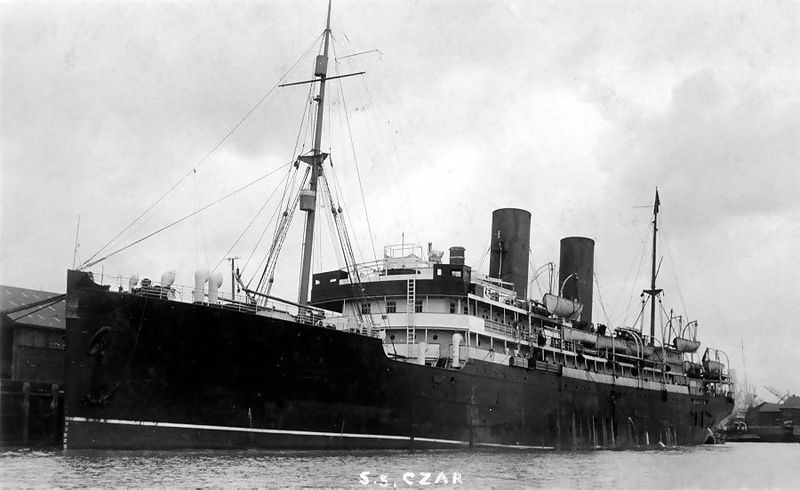 SC Czar which became the Estonia in 1921. Edwina Mower traveled to Europe on her in 1921. Wikimedia Commons

Edwina remained at 144 Spring Street until 1943 when she sold it to Rose and Joseph Cappello. Edwina, as did many homeowners at the time, rented out rooms. In 1940 she had 3 lodgers and a housekeeper living in the house. Edwina died in April of 1944 and was buried in St Albans.

Joseph Cappello died in 1951 and Rose married a local physician, William Tetreau, in 1957. She retained ownership of 144 Spring Street until 1972 although it’s unclear if or when she lived in the house. There were a mere 3 owners, all absentee, in the next 43 years with the last 28 of them in one family. The current owners, who purchased it in 2015, are an adjunct professor of writing and a music producer. The building is classified as a 2 family.