Life was different in Woodfords village in 1850. The railroads were starting to make their way through the neighborhood at that time but there were very few houses nearby. It was here that Warren Sparrow chose to call home. He purchased several plots of land from different owners in 1849 & 49. The new lot Warren held encompassed what is now the triangle formed by Forest Ave, Clifton Street, and Woodford Street. One of the deeds in these purchases has the following metes and bounds:

Warren was born in 1812 in Eastham Massachusetts. His father Richard was a veteran of the Revolutionary War. He married Ann Woodbridge around 1843. They first appear in the census of 1850 when they were boarding with a Frannie Sawyer on Pearl Street. In 1850, Warren listed his occupation as working in a carpet store. Interestingly, in 1850, Warren formed a partnership with Stephen H Tukey of Portland. They had a store on Middle Street. A deed dated September 16 of that year transfers some of Warren’s land to the corporation. The business does not seem to have lasted long as there is no mention of it in the 1858 directory and in 1860 Warren listed his occupation as ‘gardener’. Stephen Tukey seems to have stayed with the trade as he appears in the 1875 census for Brooklyn NY when he was selling carpets at the recently opened Lord and Taylor building on East 20th and Broadway.

Warren would list his trade as ‘insurance salesman’ in 1870 & 80. Beckett lists Warren selling insurance on Exchange Street in 1873. His home was shown as ‘Woodford’s Corner’. Warren and Ann Sparrow lived at 35 Arlington Street until their deaths in 1897 & 1900 respectively. Their daughters would retain ownership, although not live in, the house until 1913 when they sold it to Fred H Johnson.

The designer, if there was one, and builder is not recorded but whoever it was they were with the times in the choice of the Gothic Revival or ‘Pointed Style’ as it was referred to at the time of its building. For all of its Gothic details, and there are many, it’s a basic 3 bay wide by 2 bay deep form that would be as comfortable with a Greek Revival entablature as it is with the Gothic suit it wears. The roofline is properly steep as the style would require. The tracery treatment at the peak of the center gable is nice but goes nowhere beyond the peak. The barge boards are simple built-up moldings until they reach the drop ends. The entry and the window above are well executed. The current windows are not correct. Casement windows, as seen in the tax photo, would be proper. 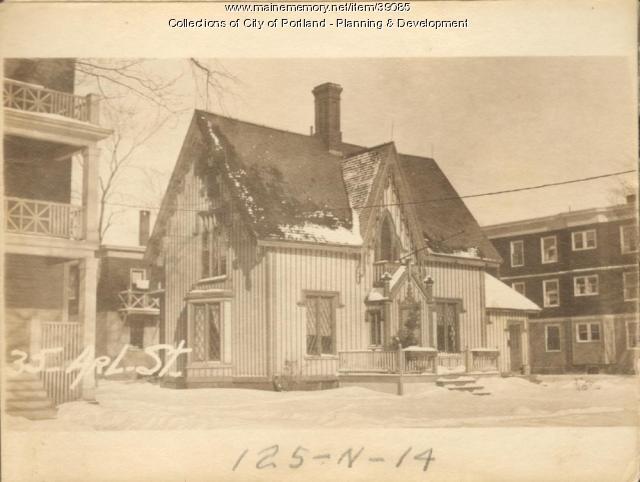 The 1924 image shows a larger porch at the entry. The porch has balusters with plain spindles and ball finials at the corners and ends. It was almost as inappropriate to the style as could be imagined but styles go in and out of taste and some people, ‘remuddlers’, just don’t care.

Fred H Johnson was a native of Gorham and was born in 1859. He married Florence Chase in 1880 and they had a son, Josiah, in 1882. Florence died the next year. Fred remarried in 1902. His second wife, Helen, was 16 years younger than her new husband. In 1902 Josiah married Florence Leighton. Her father was Llewellyn Leighton whom we have met before. Up to this time, Fred was a coal merchant. By 1910, he is a real estate dealer working with Josiah out of an office on Middle Street. One wonders if Llewellyn aided the Johnsons in starting their business.

The southwest facade of the house is the most cohesive from a gothic revival standpoint. The high peaked roof, pointed composite window in the peak and fabulous barge board really speak to what was a trendy style in its day. Andrew Jackson Downing published what would become the ‘bible’ of the movement, The Architecture of Country Houses, in the same year our subject was built. The southwest facade could have been inspired by several plates from it.

Fred would buy, sell and own properties all over Greater Portland up to the time of his death in 1934. At the time of the 1923 Portland reassessment he owned 16 properties including our subject and the carriage house at 142 Pearl St. When Fred died, the house was transferred to Helen and then to Josiah’s son Richard, Josiah having died in 1927, upon her death in 1946. Richard, who lived in Washington DC at that time, sold it the same year.

The house was purchased in 1946 by Meshel and Emilia Maria. They were emigres from the Syrian city of Tripoli in what we now know as Lebanon. Meshes, or Mishael, appears to have come to the US when he was in his late teens as in 1916, at the age of 21, he registered for the draft. He was living in Rumford and working at the Continental Paper Bag company. He was noted to have already served “1 year, 8 months” Company B of the Maine National Guard. In late 1919, he traveled back to Syria to bring his family to the US.

SS Grampian. The Marias sailed from Antwerp to Quebec on her. NorwayHeritage.com

They arrived in Quebec aboard the SS Grampian in early November of 1920 & crossed into the US at St Albans Vermont in the same month. They stated they were traveling to Rumford Maine. Meshel’s mother Salma was with them at this time. By 1930 they were renting from the Mahoney sister on Greenleaf Street in Portland. Meshel was running a variety store. Salma was not listed at this time. It would appear they were quite enamored with their new home as they named their daughter Maine.
The 1940 census found the Marias living in an apartment in the building on the northwest corner of Washington Avenue and Fox Street. The current home of PhopPa gallery. By this time they had 3 sons and a daughter.

The barge boards on the eastern gable seem to be from a later time and different hand than the west gable. Gone is the pointed filigree and rich detail and in its place are more flowing, graceful curves. They are more ‘Italian’ than Gothic.  The ‘porch extension’ seems to be a modern addition to a much simpler form just visible in the tax photo.

Meshel Maria died in 1954 a few months shy of his 60th birthday. He was buried in Evergreen Cemetery and the house was passed to Emilia. She lived at 35 Arlington Street until her death in 1980. Her will donated the property to the Holy Cross Greek Orthodox Theological School in Brookline, MA. The school sold it in 1982 to a local couple who lost it to foreclosure in 2009. The current owners purchased it in 2010.