A large but seemingly incomplete Queen Anne in Deering

Pleasant Avenue runs northwest from Forest Avenue to Leland Street one block after crossing Stevens Avenue. The avenue is lined with houses that mostly date from the decades around 1910. As one gets closer to Stevens, they encounter more homes of grander style with most dating from the turn of the 19th century. Our subject is in the latter group and is notable for its generous lot and its visibility on the corner of Glenwood Avenue.

Thomas and Josephine Mary, Mary J, Malone had been married for a little more than a year when they purchased the lot for our subject from Elizabeth Crocker in 1896. Mary had immigrated from Canada in 1895 and gave birth to their first son, Raymond in late 1896. Thomas was born in Portland to Irish immigrants, Maurice and Catherine, in 1856. 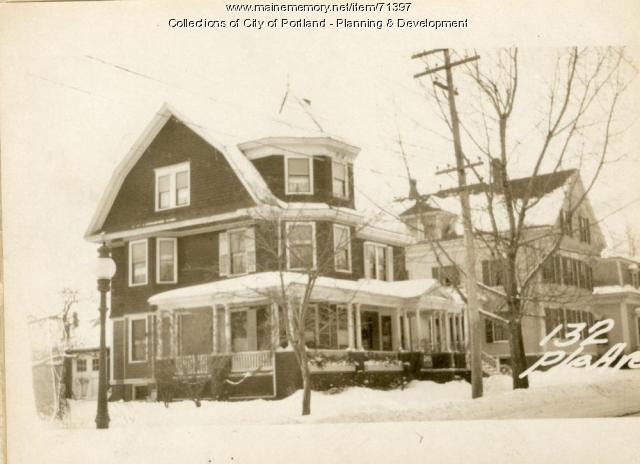 The Malone’s did not build right away as the 1900 census found them living with Catherine on Leonard Street. Also in 1900, they purchased the lot that is now the lawn on the corner of Glenwood Avenue. When they did finally build, they ticked most of the boxes on the Queen Anne checklist.

The overall massing of the house is Georgian in nature with a feeling of height and substance enhanced by the sweeping gambrel roof. This feeling is tempered by the rather truncated west side which seems to be missing a bay to balance the mass of the turret on the east side. I wonder if the house was started when they purchased the corner lot and they could not shift it over. Alternatively, they simply did not have the budget or the need with only 2 children for a larger house.

The materials used were also standard fare for the Queen Anne style with clapboards for the first floor with cedar shingles above. The verandah is deep and covers most of two sides of the house. The columns of the porch are nicely scaled but the capitals are too bulbous and seem to be squashed. A fine dentil molding acts as a minimalist architrave. The colors are nice with a creamish tan for the claps, porch & most of the trim, a Café au lait brown for the shingles, and a third, russet, color is used very discreetly for highlights.

Thomas Malone was a druggist for many years. He operated his own drug store on Washington Avenue in the location now occupied by the Red Sea Restaurant. By 1924 he had sold the store to an auto repair business and, according to the 1926 city directory, gone to work for the R.G. Dun Company, the forerunner of Dun and Bradstreet, as an industry reporter. It’s unclear how long he worked for Dun and CO. He was there in 1930 but the 1940 census had him working as a sales clerk at a state liquor store. Mary died in January of 1942 and Thomas died in October of the same year. They were buried in the Malone’s plot at Calvary Cemetery. On Thomas’ passing, the property was inherited by their sons, Raymond and Gerald.

I’m pretty sure the tall window with the large blank wall below is a staircase.

In 1944, Gerald, who was living in Indiana, sold his share of the house to Raymond and his wife Katherine. Raymond was a dentist in Portland. He had attended Harvard School of Medicine and received an exemption from the draft in 1917 because of this. He and Katherine do not appear to have had children. Raymond died in 1960. Katherine died in 1974, They too were buried in the Malone family plot. Katherine had sold the home in 1962.

The last owners we will look at are the Seidels, William, and Edletraud. William was a Portland native. He was born to John and Mabel Seidel in 1925. One wonders if Raymond knew John, who was also a dentist, professionally. Edeltraud, née Korner, was German born. They had married in 1959. They raised 4 children at 132 Pleasant Street before selling in 1980.

The current owner is a photographer.