At the corner of Park & York Streets sits a house undergoing major renovations. Its current situation allows some of its more hidden stories to be told.

Construction started around 1857 or 1858 but, as we shall see, the first building and the current building were quite different. 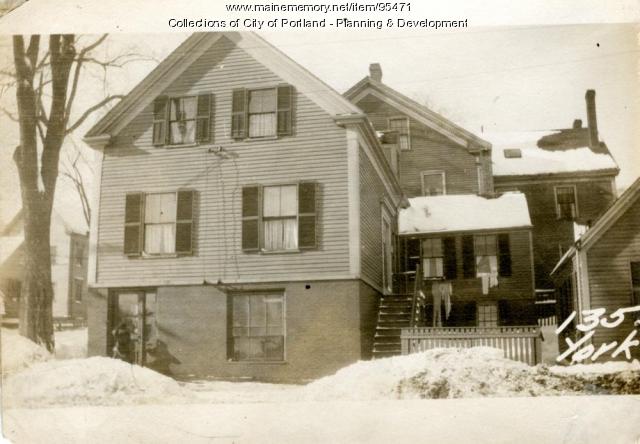 Gardner Rich was a cordwainer or shoemaker as we now know it when he purchased the lot at the corner of York and Park Streets in 1857. But, this is not our usual look at a house so let’s get back to the subject at hand.

I first took note of the house after the siding was removed. Sitting in traffic one day I was struck by the window openings. Something different in their shape. Can you see it in the photo above? The bottoms of the window openings have been infilled at some point. The original opening appears to have gone almost to the floor. This was a fairly common look for the Greek Revival as can be seen in several places in the city.

A closer look below gives a better idea of the alteration and how materials changed over time.

On the right is the original sheathing at the right edge of a window opening. On the left is the infill material. The first thing of note would be the nails. The older section shows square-headed, rod stock, nails that may have been hand-formed. The infill has round-headed wire stock, nails that were very likely drawn and formed by machine. Then there is the wood itself. The older section shows various widths and thicknesses along with, not easily discerned in the photo above, signs of hand working. The newer material is uniform in dimensions and shows little in the way of tooling marks.

Tooling marks in the older sheathing

The tell-tale marks of an old, rather dull, Up and Down saw. Sometimes called a ‘sash saw’ or ‘frame saw’, they were the standard device for milling lumber for much of the 19th century. The saw would be water-powered and the blade was held in a frame or ‘sash’ that moved up and down, hence the names, while the material to be cut was advanced into the blade via a mechanical ‘clockwork’. A still occasionally working mill from the early 19th century is located in Derry, New Hampshire.

These saw marks are indicative of an older mill but they also give other hints.

There is a variety of pieces of wood stitched together to make this house. Some of it, as we will see, relates to the build history but some say to me that materials were reused in places. In the image above we can see boards of various widths, thicknesses, and finish quality. Some, like the second board on the right of the window, are surprisingly well finished both in surface and edge. Others, like the two above that, are just all janky with chipped and broken edges and really rough faces. This randomness carries throughout the building’s exterior.

This picture, of the Park Street facade, adds another story, and a bit of mystery at first, to the tale At first it seems to be another picture of the altered window openings. But there is more going on here. Why are all the boards to the left of the opening so short? And why don’t they match the boards to their left? What about the bricks? Hmmm…

The image above is a crop of the previous, I’ve tweaked the contrast to better see a couple of details that start to answer questions. At the top of the image, just below the new work, we can see some framing members, wall studs, for the original building. Note how these studs change in size and spacing at the same point where the siding changes. Also, note the paired studs on the left of the opening. This, to my eye, was a corner post at one point. The wall would have stopped and turned at this point. Could the original building have been one bay wide and the other two added at a later date?

The gable end of the house facing the parking area starts to resolve the mysteries. At first, it seems to be a bog-standard house with some windows yada, yada, yada. And this is all true. But, I draw the reader’s attention to the right side of the left second-floor window. There is a distinct diagonal joint in the siding that springs from mid-window and runs to the roofline. This line matches the angle of the roof it intercedes with. Another hint is under the left window, there is a vertical joint in the siding. As with the window we looked at before, the siding does not match across this line.

This image shows the vertical line better. You can follow it all the way down to the ground as the brickwork of the foundation changes as well. The, slightly wonky, merged image below shows the outline of the original building.

So, it seems Gardner Rich built a simple 1 bay wide by 1 bay deep structure first. At some point after that, the house was enlarged to what we see now. I believe the change came after 1873 when Gardner sold the property to John Hawley. Beckett’s directory of 1873 puts Gardner and his son on our subject property where they plied the shoemaking trade. They were listed as residing in across the river in Cape Elizabeth. Hawley, who ran a restaurant, lived on Commercial Street. Given the type of work the Rich family was involved in and the fact that they didn’t reside there, it seems to me to be unlikely that they would have had the needed the large building. Perhaps the Hawley’s needed a bigger house. Given the mismatched quality of the siding, it seems whoever did the enlargement, they did it on the cheap.

1 thought on “Tales from the Timbers. 139 York Street”