A brick Greek Revival between State and Brackett Streets.

They were tumultuous times. The nation had seen unsettled economic conditions for most of the 1820s, ’30s, and ’40s. It’s estimated that business activity nationwide fell by more than one-third (35-39%) from 1836 to 1843 (data from the National Bureau of Economic Research). Coupled with this was an increase in immigration from Ireland, Germany, and other countries in Europe. These immigrants brought customs and religions that were new and often distrusted in the nation. As most of the new arrivals were, at first, housed in the cities of the Atlantic coast, the tensions in these cities increased in tandem with the populations. Portland, Maine was no exception.

Charles H Green was a busy shipbuilder in 1850. He and Catherine Marriner had married in 1838 and had 3 children when, on July 25th, one Thomas Paine found them on living on York Street for the decennial census for that year.

It’s a form that pops up from one end of the city to the other in the 1850s. A brick mass with square columns also of brick surmounted by a deeply molded entablature. The windows are a bit meager but the first-floor units are full height which was quite popular for the era. The wooden molded hoods over the first-floor windows are, in my opinion, later additions as they are out-of-place. They would be correct on a Gothic Revival building but not a Greek Revival. It could be the Green’s requested them and the builders obliged

Charles Green purchased the land for our subject from William Widgery Thomas in late May of 1850. Thomas was born in 1804 and was a very successful merchant and banker. He lived in the grand Federal House across Danforth from our subject. He was also a Whig and something of a nativist. A fact highlighted by an interesting, and possibly unenforceable, clause in the deed to Charles Green.

“This conveyance is made with the following conditions. That the lot be used for a dwelling house & for no other purpose is to be erected by Mr. Green or his assigns. That the property nt be used by, leased to, or occupied by none other than native born  (sic) American Citizens (emphasis mine). And if used for other purposes, shall revert (emphasis mine) to said Thomas or his assigns unless consent first. Consent shall be in writing that it may be sold to other persons or used for other purposes than above.

Thomas would live to see one of the most prominent Irish immigrants in Portland build his own home directly across the street, and next door to our subject, at 158 Danforth in 1863.

The rear wing is more functional and, in my eye, more attractive. The lack of hoods and gently arched lintels create a simpler, cleaner look. An interesting detail is the use of a hipped roof on the pavilion of the ell whereas the other roofs are of normal style.

Charles, John, and Luther Frost all learned the craft of joinery from their father Charles. Charles the elder, a Portland native, appears in city directories from the 1820s through the ’40s. The three sons likewise appear and disappear from the late 1830s through the ’80s. As the term joiner was used to signify a house builder, we can determine that Charles, and presumably his brothers, would have done all of the carpentry work on the house. Sewall and Edward Chase were the masons who would have done all the brickwork.  As the masonry carries several similarities with other period buildings in the city, I wonder if the Chase brothers were the builders of those houses as well. 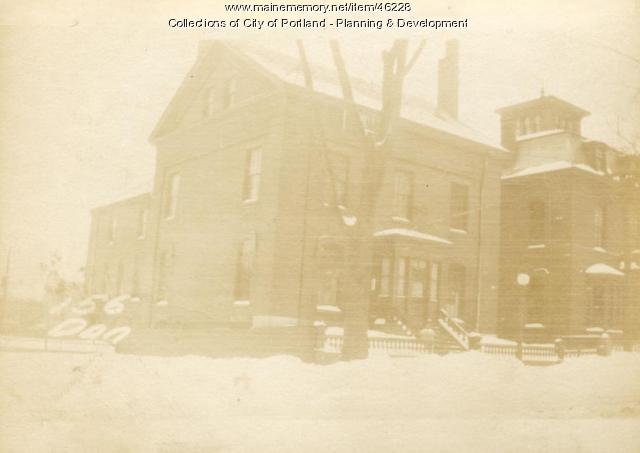 Charles Green had by the late 1850s determined to change vocations. To that end, in May of 1859, he took a mortgage for $10,000.00 from a Boston Coal dealer by the name of Edwin R Sawyer. Green had previously taken a promissory note for $5,000.00 from Sawyer in 1858. In January 1860, he ‘sold’ the property to St John Smith for $4,000.00 which is odd as he had some $15,000.00 in loans against it. 9 months later, Edwin Sawyer took possession of 154-156 Danforth Street by way of a deed, noticeably devoid of Thomas’ nativist limitation in the original deed, from Charles Green. Green moved to Spring Street and teamed with William Evans to open a coal dealership of their own on Commercial Street.  Sawyer sold the property to Frederick Messer in the following year of 1861.

Frederick Messer was a merchant who lived in our subject with his wife Sarah until his death in 1889. He seems to have been fairly successful as the 1870 census puts his net worth at $100,000.00 which is almost $2,000,000.00 in 2019. Sarah died the following year at which time the property was sold to William Milliken who sold it in 1891 to the Roman Catholic Diocese of Maine. They would use it for an extended period of time as a rectory for St. Dominic’s Church. The diocese retained ownership until 1978. It is currently owned by the Real Estate firm that owns and operates out of the property next door at 158 Danforth Street. The current tax data shows it as a 5 to 10 family apartment building.