A well designed and built Italianate just off State Street in the Deering Street historic district.

Francis Ashby Waldron came from old New England stock. Born in Buckfield Maine in 1816, Francis’ father, Richard, was one of a line of Richards extending back to the 1630s and Dover, New Hampshire. One of them, Francis’ great-great-grandfather, had married the daughter of Thomas Westbrook for whom the city is eponymously named and of whom many tales have been spun. Francis married Harriet Furbish of Brunswick in 1846 by which time he was an established trader

The house displays a striking verticality that is enhanced by the high basement along with the boxed and bracketed pilasters and the lack of any belt course. The details are all very correct in scale and proportion. It’s very textbook Classical Italianate and could have very well have been taken from a pattern book. The emphasis on verticality would become something of a hallmark in the mature works of Francis Fassett. Mind you there is no attribution that I know of to back this up. Fassett had moved to Portland from Bath, where he had already made a name for himself, in 1865. Could this be an early work? Would a successful businessman such as F A Waldron select a still relative newcomer to design his new abode?

Francis founded Waldron and True with Samuel True sometime after 1859 and had seen great success. They ran a grist mill at Stroudwater and had warehouses and offices on Union Wharf. In the early 1880s, Waldron and True broke up with both continuing to trade in grain, etc but out of different locations. By the 1890s, Francis’ son Flavel had joined with his father in FA Waldron and Son on Union Wharf. 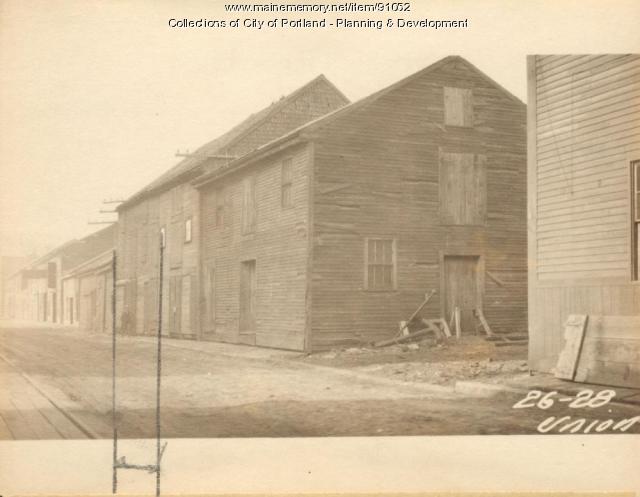 Francis and Harriet had, along with Flavel, a son Francis Jr who in 1880 was a railroad ticket agent who was listed on the census as being disabled with asthma, and a daughter Nellie. Harriet died in May of 1882 at the age of 62. Her cause of death was listed as cancer. She was buried in Evergreen Cemetery. Francis Waldron Senior died of ‘spinal cord disease’ on the 20th of February in 1898. Francis Jr died on the 23rd of March of the same year. Flavel had married Mary Elwell of Alfred, Maine 1881. They purchased a house across the street from the family home where they raised 2 girls. Flavel died in 1926 and Mary in 1945. Nellie Waldron never married and would live at 43 Deering Street until 1948. She died in 1950. They were all interred in the family plot in Evergreen.

The first-floor elevation, with its bays and entry portico, is a wonderful composition. The horizontal lines project unbroken across the facade and work to balance the overall vertical nature of the building. Paired columns with simple capitals sit on hefty plinths which carry the same molding pattern as the entry. The columns work to frame the door and draw the viewer towards it. The architrave and cornice are scaled-down versions of those on the main block. The cornice has a strong projection emphasizing the horizontal break.

The use of tall windows on 3 facades and both floors are unique and quite high style. They are set under a rather tall frieze board and covered with strongly projected hoods sitting on chunky, scrolled, brackets. 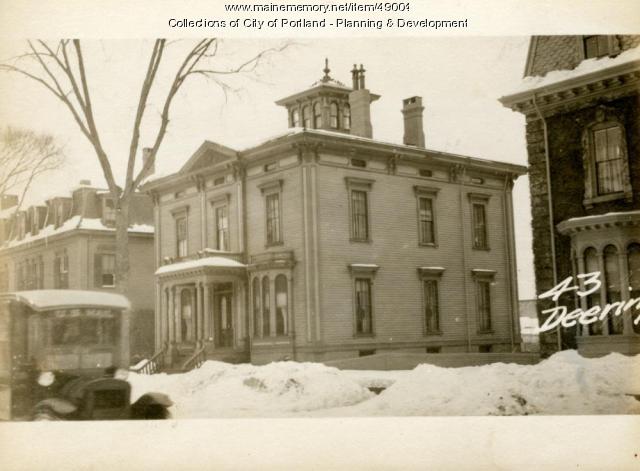 Note the extant chimney pots which are visible in the 1924 tax photo. Also noticeable in the photo above is the detailing of the architrave and how the brackets appear to be built up from smaller elements. By the time of construction, mass-produced architectural pieces were starting to become available but it is likely that these brackets were fabricated on-site by the builder/s. Noticeable by its absence is the cupola. Lost to the costs of maintenance no doubt. A shame as it seems to have been quite grand.

The property is currently owned, and very well maintained, by a law firm.