A modest Greek Revival in Bayside

How far that little candle throws its beams! So shines a good deed in a naughty world.
William Shakespeare

The candle is a simple thing. Often seen on birthday cakes and as the centerpiece of a romantic dinner, it’s a pleasant bit of fancy but not a necessity of life. This was not always the case. In the days before electricity and petroleum-based lamp oils, candles were the standard for lighting. They were also more portable and stored better than whale oil. For centuries one of the most common of types of candles was the tallow candle. Made from rendered beef or sheep fat, it was simple, used a readily available waste product, and could be made at home or on a large scale. But, this isn’t a story about candles.

36 Mechanic Street is an 18’ x 36’ 2 story block with a 12” x 14” single-story ell attached. It’s narrow and deep with a gable end to the street and the entry in the center of the long side. It’s a simple form that we see plenty of throughout the city. It spans decades and was easily adapted to the architectural style du jour. In our case, the style was Greek Revival as marked by the paneled corner boards and lightly dentiled architrave.

William H Stewart was a carpenter’s apprentice when he purchased the property for our subject from Pitman Morgan in March of 1851. He had married Abby Brown of Portland in 1848 and they had an 18-month-old daughter, Emeretta when they made the purchase. By 1853 the house was complete and William and family were living there with his brother Timothy. Living across the street from the Stewarts at # 9 Mechanic was a family named Trowbridge.

The history of the Trowbridge family in the US goes back to the 1630s and Thomas Trowbridge. Thomas was a respected member of the community in New Haven CT as seen by his memorial in the crypt of the historic Church on the Green in that city. As with many old New England families, the ensuing 2 centuries would see involvement in wars and revivals and an outward growth from the early coastal settlements into the hinterlands of the region.
Elisha Trowbridge was a 4th generation descendant of Thomas and was born in Newton Mass in 1797. He married Margaret Stimpson in 1822 and settled in Portland that same year. Their first child, Edward Robbins, was born in 1823. They had 6 more children by 1837. Elisha worked as a tallow chandler making and selling candles with Rufus Horton then on his own in a facility on Portland Street. In 1831 he purchased a lot on the newly laid out Mechanic Street for $150 and built a house for his family.

It was in the house at 9 Mechanic, long since removed, that Edward grew up and married Betsey Ilsley in September of 1853. Betsey was some 6 or 7 months pregnant at the time as Elizabeth Mary “Lizzie” Trowbridge was born on November 16th of the same year. The Trowbridge family history, available at Google Books, states that Lizzie was not Edward’s child but he adopted her. The official records list Edward as the father. 1853 was also the year Elisha and Edward formed ET Trowbridge and Son.

Edward purchased 36, then 16, Mechanic Street from William Stewart in August of 1856. The family would remain there through Edward’s death, of an unknown reason, in 1870. Along the way, Edward’s brother George would die of illness contracted while a confederate prisoner of war. After Edward’s death, Elisha sold the family business and retired from what had been a very active public life. He died of a broken heart they said in 1880. 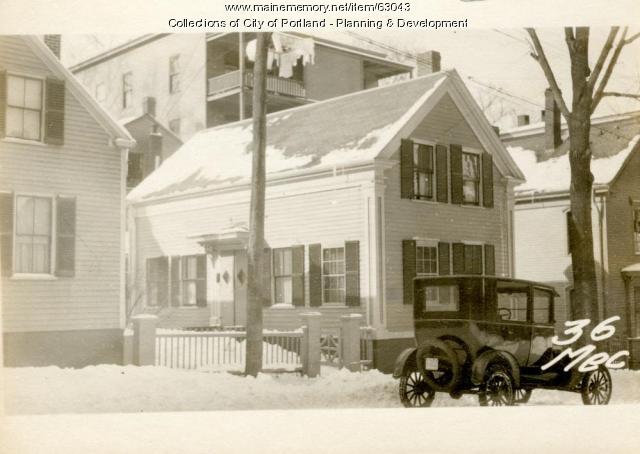 Betsey and Lizzie Trowbridge remained in our subject after Edward’s untimely death in 1870. Lizzie became Mrs. Fenley when she married George Fenley, a typesetter for the Eastern Argus newspaper, in 1877. George had grown up on Myrtle Street with ‘ink in his blood’. His father was a long-time printer in Brown Thurston’s operation on Exchange Street. Betsey transferred ownership in the house to Lizzie in 1887 but remained there until her death in Feb of 1897. Lizzie died in December of the same year leaving the property to George. He sold it to Frank Levecque and his son Paul in 1919. George Fenely died in 1924.

Frank Levecque was born in Portland in 1867 and worked for many years as a coachman for the Doten family who owned a large wholesale grain company on the waterfront and had a house on State Street. He and his wife Sarah had a daughter, Mary, and the aforementioned Paul. Paul worked as a clerk in various retail grocery and dry goods stores in the city. Sarah Levecque died in 1920 and Frank in 1925.

36 Mechanic Street is currently listed as a single-family dwelling. Condition is excellent.