A Greek Revival with later alterations in the West End

They came early. John and Moriah, sometimes listed as Maria, Van Buskirk had been living on Danforth Street when they purchased a 5000 square foot lot in what was open land on outer Spring Street in 1846. The seller was a merchant named Zophar Raynolds. He had purchased it from the Vaughan family in 1839. The Van Buskirks paid $125 for the land.

What they initially built is not clear. The Portland Historic Resources Inventory of 1976 states the house was originally a Greek Revival with the Mansard roof and details added later. Looking at the house today, this description seems to fit. There are some ‘Greek’ details in the paneled pilasters with simplified Doric capitals and the plain but tall architrave. The main block is a 15’ x 30’ block with a 13’ x 18’ ell that carries the line of the right wall.

I believe the main block, up through the second story, is original and the ell and third story are later items. These latter additions were most likely done in the mid 1860’s when there were 10+ people living there. There are a pair of deeds to masons, Henry Starbird and Albert Fobes, around 1865 that reference the lot for 327 Spring Street but do not mention any buildings and are for low dollar amounts. Could they have been notes towards construction?

John Van Buskirk was a marriner who died in December of 1849 at the age of 30. He may have died at sea as the mortuarial records list his cause of death as drowning and I cannot locate a burial record for him. Moriah, who died in 1891, was buried in Western Cemetery. John left his wife and 4 children including a 1 month old daughter. In March of 1851, John, who had been dead for 2 years, transferred the land and half the house to William and Robert Dickey. William and Robert were the minor children of John’s cousin Susan who had married a marriner named William Dickey around 1840. The Dickeys and Van Buskirks lived at 327 Spring Street until 1868 when they moved to Gray. They sold our subject to an attorney and part time judge named Nathan Cleaves. 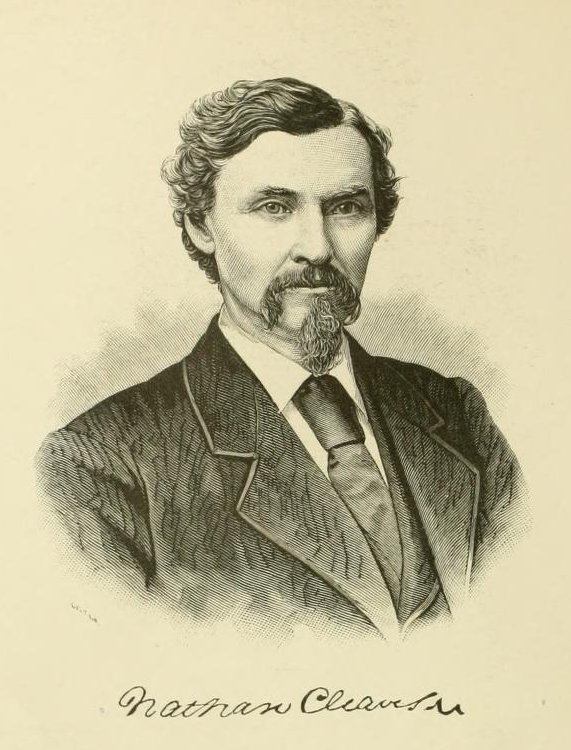 A rather dashing Nathan Cleaves. FindAGrave.com

Nathan Cleaves was born in Bridgton in 1835. He attended Bowdoin College and started his legal career in Bowdoinham before moving to Portland in 1862. He first worked in the office of Lorenzo De Medici Sweat who was an attorney and serving in the US House of Representatives at the time. In 1864, he joined in partnership with Judge Joseph Howard.

In 1865 Nathan married Caroline Howard, the daughter of his legal partner. The same year he purchased 327 Spring Street, 1868, Cleaves was named city solicitor. in 1871 he was elected to the Maine House where he served two 2 year terms. In the late part of his second term, Caroline died at the age of 45. They had no children. Nathan sold our subject in 1876 and took rooms at the Falmouth Hotel until his death in 1892.

327 Spring Street in the Goodwin Atlas of 1882. Portland Public Library. 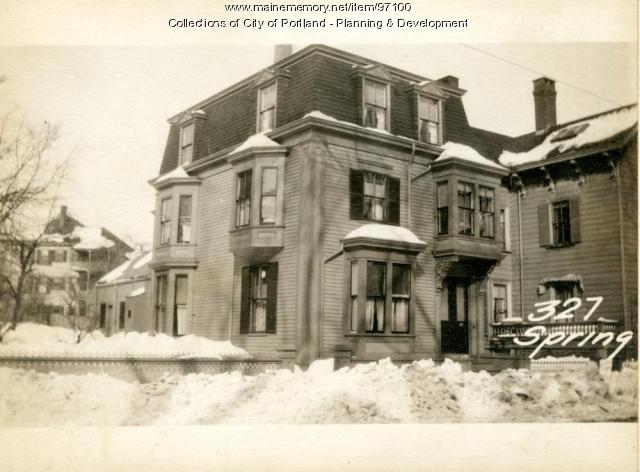 When Nathan Cleaves sold 327 Spring Street in 1876, the purchaser was an aspiring attorney named Henry W Swasey. Henry had been born in Standish in 1842 to an attorney named Horatio and his wife Harriet. Henry graduated from Bowdoin and worked as a teacher and principal at Limington Academy. He joined the bar in 1877.

327 Spring Street in the Richards Atlas of 1914. Portland Public Library

Henry had married Caroline, Carrie, Hunt, who was the daughter of a Portland furrier, in 1866. They had 2 daughters who died in infancy and a son, Horatio, who would become an attorney in his own right. Henry had an office on Exchange Street for many years. He died in 1917 and Carrie in 1926.

Horatio Swasey, who had moved to New Hampshire, sold 327 Spring Street to Helen McCluskey of Portland in 1939. Helen’s husband Charles was a salesman for Long, Libby and Hanson Co which was a wholesale dry goods outfit located in “Dry Goods Row”on Middle Street.

The McCluskeys sold to a druggist named Edward Halpin, his wife Susanna and their widowed daughter Mary in 1949. The house would be sold again in 1963 to a Naval officer named Frederick Wade and his wife Louise. In 1987 Lousie sold it to a John Mcintosh Jr who sold it that same year to David Curran Jr. and Roger Dewey Jr. They converted the property to condominiums in 1988 under the name West Side Place Condominium.

327 Spring Street is currently listed as a 3 unit condominuim. Condition is good.