A brick Federal home in the North Deering neighborhood.

Author’s Note: Regular readers will note the lack of a 1924 Tax photo. For all the length of Summit Street, from Allen Avenue to Washington Avenue, there is 1 house in the 1924 database. Not even the school across from our subject on the corner of Jackson Street, where the owner of our home worked as a janitor in 1910, is listed. 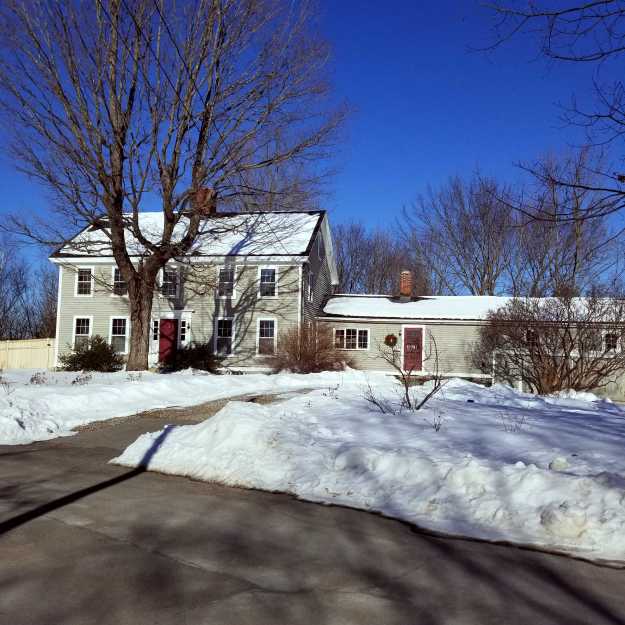 Maybe they just wanted some privacy. When Charles and Abbie Frost built their large, squat,square, house in 1803, the only other family on this quiet ridge overlooking the Presumpscot Falls were the Winslows about a half mile or so farther north along the ridge. The Winslows were farmers but I’m not sure the Frosts had any agricultural interests other than subsistence farming perhaps. Charles had no experience in farming. He had grown up working at the family tavern in Stroudwater. By the time he built our subject, Charles was managing the estates for the family while a tenant farmer worked his 150 acres which he had inherited from the William Pepperrell estate. 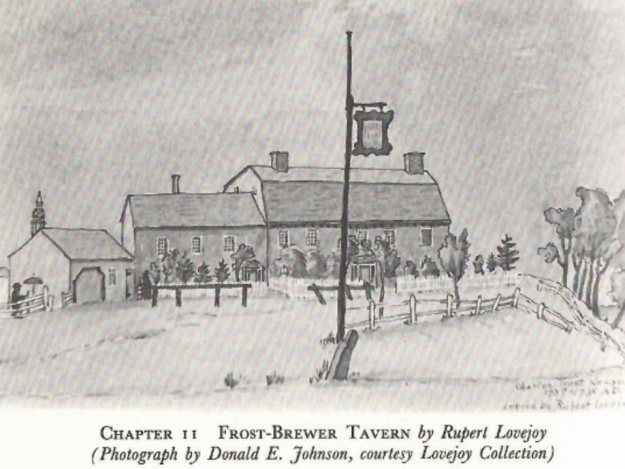 Frost Brewer Tavern at Stroudwater. From “This Was Stroudwater” by Muriel Lovejoy. Drawing by Rupert Lovejoy.

In those days, it was the Gray Road and it was the main route north west to that town. Charles lost the house in a court judgement in 1844. The property was taken by a George Frost who was no doubt a relative of Charles but I have not determined the link. George Frost died in 1873 without heirs. In 1880, no explanation for the 7 year delay, the property was sold by the sheriff to satisfy George’s debts. The purchaser at that time was Mark Morrill of Portland.

The house is, as noted, a bit oddly proportioned. It is too wide for its height and the second floor windows being pushed nearly into the architrave just emphasizes the lack of height. The masonry is solid with the bricks laid in a flemish bond. The bricks are inconsistent in size and shape which, along with the date of construction, lead me to think they were made on site from clay gathered on the banks of the Presumpscot. The current mortar is, to my eye, too white and makes the surface busier than need be. The current porch is not original. 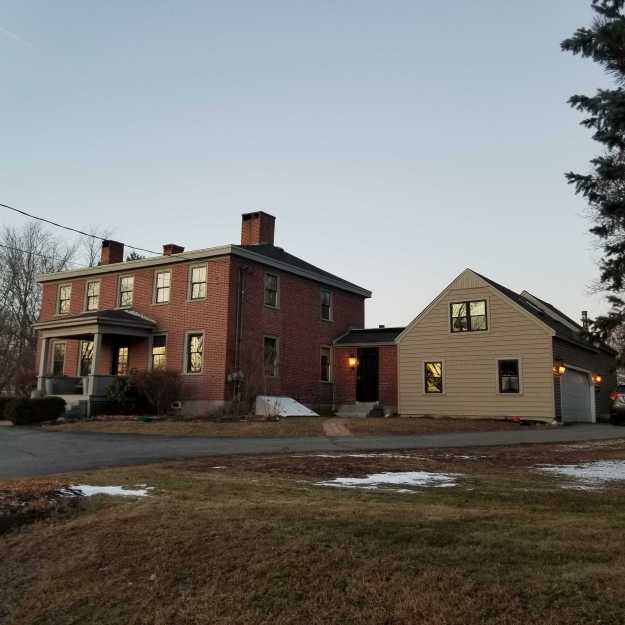 The windows have obviously been changed but the openings do not show any signs of alterations. They are a bit small but well spaced. The rook is a hipped at a very low pitch. I wonder if snow buildup is a problem. The chimneys present something of a puzzlement. The 2 sides of the house have different arrangements. The south side has a chimney in the center of the wall dividing the front and back chambers. This is an older style that relates to colonial era buildings with a single, massive, chimney in the middle of the house. On the north side, we see a chimney in each chamber, front and back, placed on the outside wall but still within the house. This is a later, more developed style which, if original, would be an early example. It’s possible the two sides were not built at the same time with the south side being earlier than the north but there is nothing to suggest that when looking at the house today. I suspect the north side was altered after construction but why the south side was not altered is not answered. 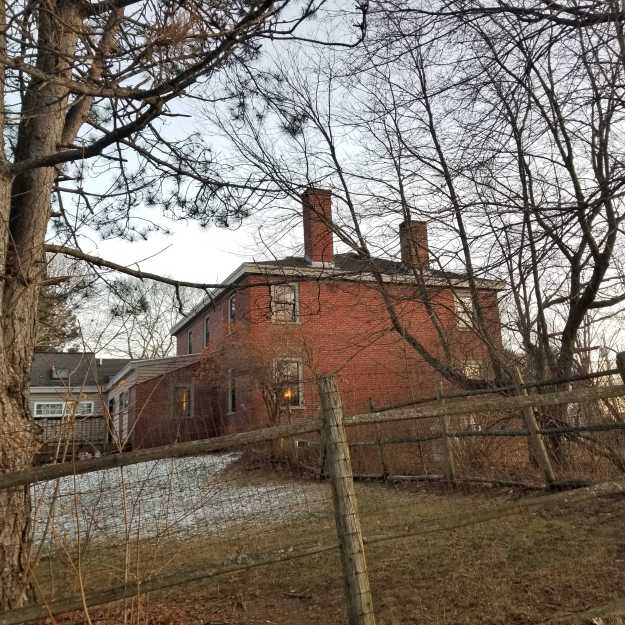 Mark Morrill was the overseer of the Falmouth Poor Farm when he purchased 271 Summit in 1880. He was 40 years old and had served in the Civil War mustering in 1862 and was honorably discharged in July of 1863. He was awarded a Campaign Medal in 1907. He and his wife Rachel had 3 children, Hattie, Grace & Herbert. Rachel died of tuberculosis in 1906. Mark married Angie King in Saco the following year. 1910 found Mark, Angie and her mother living on Summit. William Babb and his sons Fred and Melville are listed in the census and city directory as running a dairy farm on the same property. Mark & Angie sold 271 Summit Street in 1911. Angie died of tuberculosis in 1916 and Mark of influenza in 1920.

From 1911 when Mark Morrill sold our subject property to 1914 when William Decelle purchased it, 271 Summit Street saw 4 different owners excluding the two listed above. All appear to be absentee owners who never actually resided on the premises. William Edwin Decelle was a clerk at the Maine Savings bank on Middle Street when he and Harriet Decelle ‘bought the farm’. William had grown up on ‘The Hill’ in a house his sister,Lena, still owned. William’s father was a long serving night watchman at the Maine Savings Bank. William had 3 children from a previous marriage, Gladys, Joseph and Myron, all who were under the age of 8 when they moved in. The kids would grow up on land that was becoming more built up with every new year. In 1941 the Decelles sold the Summit Street home and moved to South Portland. The purchaser was a conductor for the Grand Trunk Railroad named Thomas Earls. Thomas and his family lived nearby at 18 Jackson Street. 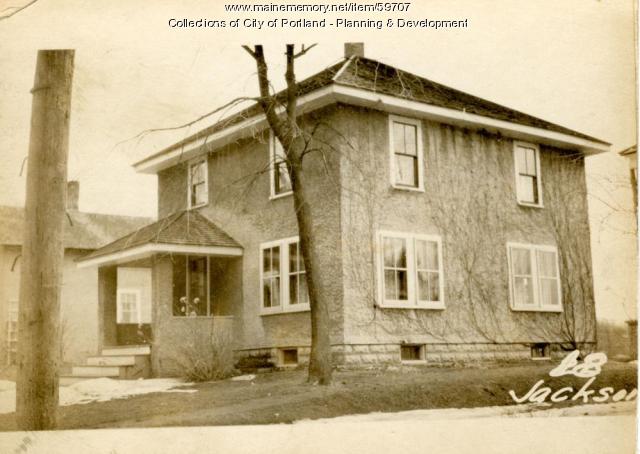 A side note, all deeds relevant to 271 Summit Street upto the sale to Thomas Earls make note of a ‘family burial ground’ in the north east corner of the Frost property. Where this ground is or was has become lost. The deed to Earls references survey marks and speaks of the property line passing the ground but gives no specific coordinates. It could be in the tree line that traces the property lines running between Curtis and Frost Hill Roads. All we know is, there’s bodies in the woods.

271 Summits Street is a single family home sitting on .78 acres of land. Condition is very good. The owners are a real estate agent and the president of a jewelry company.