The crest of Munjoy Hill has long been the neighborhood center. When Captain Lemuel Moody built the Observatory in 1807, the hill was still mostly barren with some growth moving up the hill from the cemetery and India Street. Moody’s efforts to encourage building and development on the hill were somewhat successful and, after his death in 1846, his son Enoch carried on the efforts. The land for our subject at 7 Lafayette Street was part of the Moody lands and was sold by Enoch to a ship caulker named Isaac FIckett in 1851. After subdividing his purchase, Fickett sold the lot for our subject to an insurance broker named John Gunniston in 1852. A week later, Gunniston sold 7 Lafayette to a joiner named Ward Noyes who paid $440 for it. The very same day, Noyes sold it to Samuel Mayall of Gray for $900 and the deed now includes “buildings thereon”. From this, I surmise that Ward Noyes built 7 Lafayette Street for Samuel Mayall in 1852-53.

The house is a simple 25’ x 36’ one and a half storey structure. It’s adorned with a Greek Revival entry and architraves above the windows. The current shingles are incorrect for the style and period and bring an unwanted business to the facades. The first floor windows are very deep in the ‘Grecian’ style. The dormers are oddly sized and don’t quite fit the building. I think they were later additions done when a carpenter and his family owned the house. The little bump-out on the southeast gable end is interesting. It appears on the Sanborn map of 1882 so it’s been there a while. The 1924 tax photo seems to show it having doors on both sides. 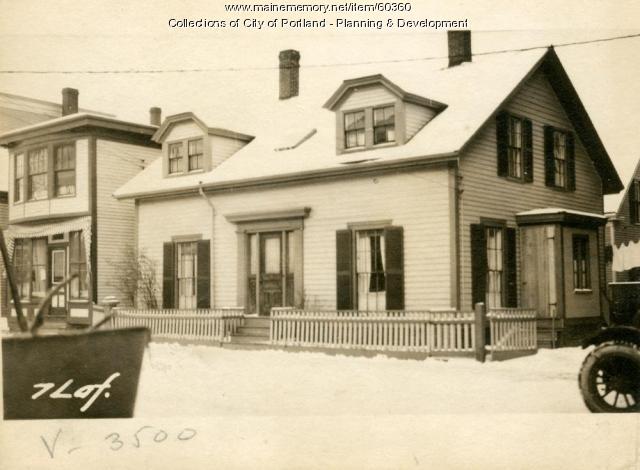 Exactly why Samuel Mayall Jr. chose to build this relatively small house on this spot is, as are most things 150+ years later, a bit of a mystery. It was his first purchase of land in the city. In the same month, he purchased a house and land on High Street and, 6 months later, he purchased 2 properties on Pine Street near Brackett. A look at his story may yield some clues.

His parents were born in England. Samuel the elder worked in the woolen mills prior to immigrating to the US in the 1780s. In his belongings, he smuggled plans and equipment for carding wool. At the time the technology for machine processing of wool was highly guarded and punishment for exporting such tech was harsh. Two separate attempts were supposedly made on Samuel’s life after he set up in the US. At the same time Mayall was starting his first mill, another English emigre named Samuel, Slater in this case, was also developing a mill in Rhode Island based on technology he smuggled out in his ‘photographic’ memory. Samuel Mayall is credited with starting the first water-powered woolen mill in the US but Slater’s work created what today is seen as the American factory system and his mills are iconic in their shape and form.

Samuel Mayall Junior was born in 1816. Despite a limited education, he became a director of the First National Bank of Gray and served as a state representative in 1845, 47, and 48. In 1851 he was nominated for the 32nd Congress as a Democrat but he declined the nomination. He was nominated again for the 33rd Congress and was elected to the office serving from 1853 to 1855. He declined to run again and renounced the party over slavery. He became a Republican and was a delegate to the 1856 national convention in Philadelphia. He moved to St Paul MN in 1859 where he became a wealthy landowner after serving in the Civil War. He died in 1892 and is buried under one impressive monument. Given all of this history and the timing of real estate transactions, was Samuel building a ‘base’ in Portland to prepare for running for higher office?

In the midst of all this political activity, Samuel sold our subject to a shipmaster named George Littlejohn in October of 1854. George was the son of a cooper also named George. He had married Eunice Howes, the daughter of a confectioner, in 1848. They had a son, Enoch, in 1849. Charles sold our subject to a Clement Littlejohn on May 9 of 1856. Clement sold it to Eunice Littlejohn 4 days later. Both deeds have the same wording and values so why the transaction even happened is unclear. In 1857, Eunice sold the property to Dorothy Littlejohn who was George’s aunt. She sold it to Patrick Silver in 1876. It’s notable that Patrick paid $900 less than Dorothy paid when she bought the property in 1857.

As noted, Patrick was a carpenter and I suspect he was the person who added the dormers. It seems that Patrick and his wife Bridget didn’t live in the house at first, if at all. I base this on an article in the Portland Daily Press for November 30, 1878, regarding a fire on Congress street that led to the death of an elderly widow named Julia Deeny. The article states that Patrick Silver, “who has a large family, was occupying the basement with Deeny and her two sons in the attic with the middle floors unoccupied. They did have a large family with 8 children in total. So, it would make some sense that Patrick would need to enlarge the house to fit.

By 1880, the Silvers, sometimes “Silvas”, was living in our subject with 7 of their 8 children. One of those children, 13-year-old Martin was noted as being ‘at school’ but also being disabled due to a gunshot wound. There is no other information regarding the date or cause of the injury. Patrick and Bridget were born in Ireland and came to the US via New Brunswick, where most of their children were born, sometime around 1871 or 1872. In 1882 Patrick transferred the property to Bridget. He disappears after that. Bridget died in 1912 and was buried with most of the children in Cavalry Cemetery in South Portland but Patrick is not there. Bridget had given 7 Lafayette Street to James Silver, Edward Silver, and Mary Silver Fenn in 1895 although she remained there until her death. The children sold the home to a gentleman named John J O’Brien in 1918.

John O’Brien was born in Portland in 1880. He ran a drugstore on the corner of Fore and India Streets. He had married Alice Etheridge of Round Pound in 1917. They had 3 sons the youngest of which, John Jr, died in 1925 at the age of 4. 1925 was also the year in which John transferred our subject to Alice. In 1919 he leased a storefront and basement below on the corner of Congress Street and Washington Avenue from the Gerber family. The cost was $600 a year with monthly payments of $50 due on the first. The lease was renewed in 1920 but apparently, not after that. In 1934, Alice purchased a house on Columbia Rd in the Rosemont neighborhood. The family decamped there and rented 7 Lafayette Street until 1946 John having died the previous year. 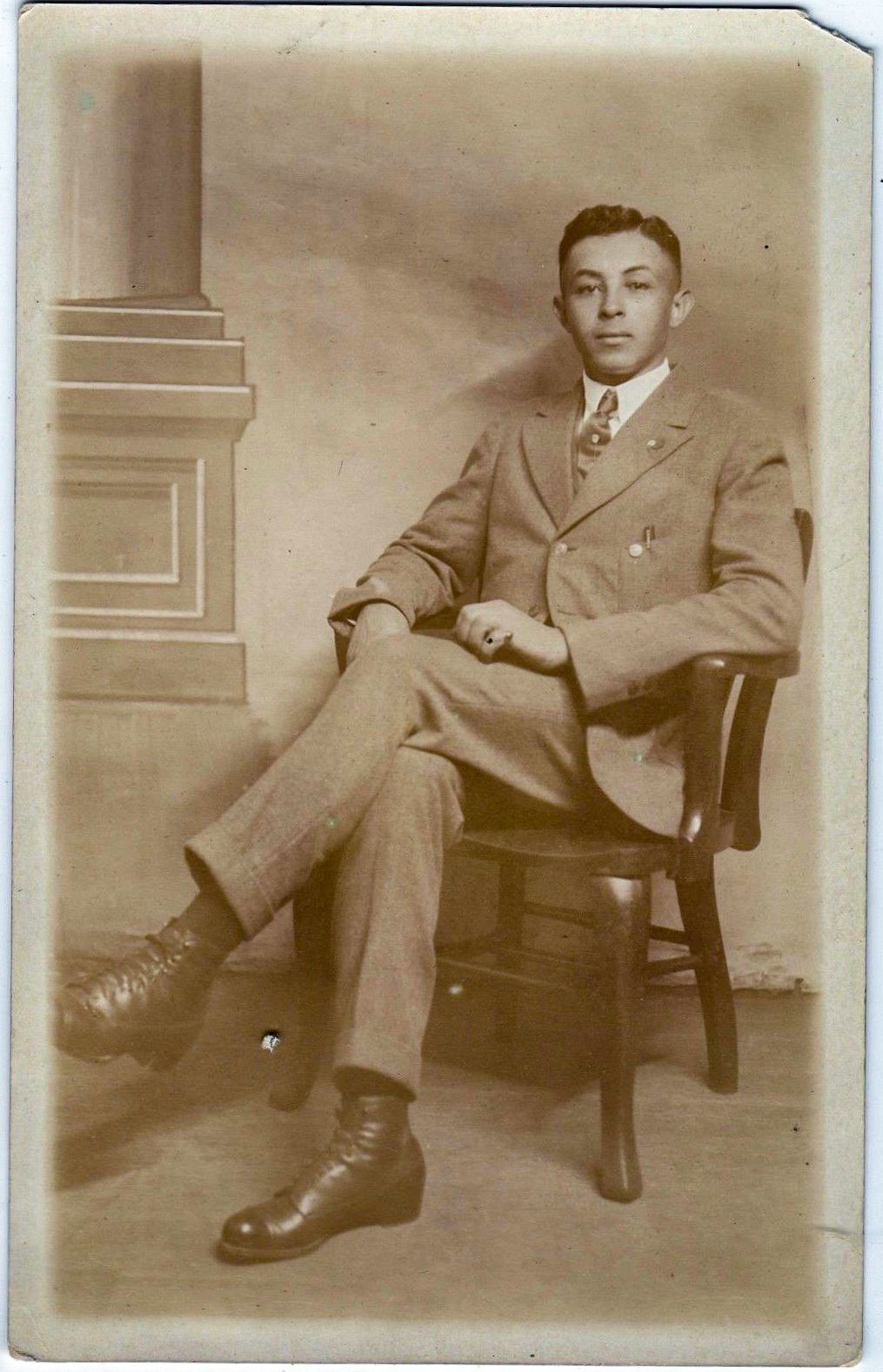 David and Gladys Morris purchased our subject in 1946. David was born in Manchester Parish, Jamaica in 1892. He came to the US in 1915, served during WWI. He married Gladys Newell in 1920 and became a US citizen in 1922. They had one daughter, Mavis, in 1929. David worked as an electrician with Cumberland Power and Light mechanic before becoming an auto mechanic working for different dealerships on the ‘auto mile’ on Forest Avenue. The Morris’ lived at 7 Lafayette Street until 1961 when a clerk for the Portland Fire Department purchased it.

Many Thanks to Will and Samuel Mayall for sharing information and images of their ancestor and the builder of our subject. It’s a rare thing to meet the descendants of an original owner. I hope I have done your ancestor’s memory justice.

7 Lafayette Street is currently listed as a single-family home. Condition is excellent.