Martin’s Point is an oblong chunk of land that juts from the East Deering shore into the Presumpscot River tidewater. The point is named for Richard Martin who married Jane Atwell, a widow, in the 1630s. Jane’s first husband, whose name is lost to history, received the land from George Cleeves in 1632. Martin resided there until death in 1673. The land would pass through the family for over a century after his death. 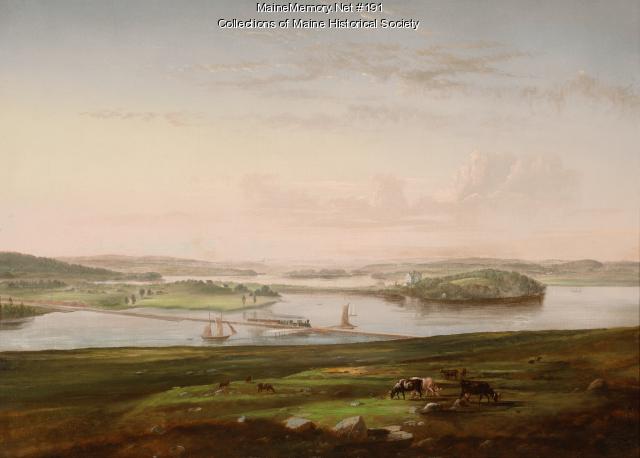 In the 1830s and 40s, the area became home to shipyards as the waterfront on the peninsula was increasingly taken over by wharves and warehouses. George Turner built a yard on the point in 1841 and ran it until 1847 when he moved his operation to the Cape Elizabeth shore and built the Veranda Inn on the site. The inn only operated a few years before burning in 1851. A small infirmary was built in its place and that building was replaced by the Marine Hospital, now Martin’s Point Healthcare, in 1859.

One of the supporters of building the Marine Hospital was Francis O. J. Smith, ‘Maine’s Greatest Failure’. Smith was, at the same time, constructing the ‘Presumpscot River Canal”. This was to run from the waters of the bay right where Martin’s Point juts from the mainland, along the banks of the tidewater section of the river to a lock and wharf at the foot of the lower or Salmon Falls. The intent was to avoid the several miles of tidewater that were too shallow to navigate during low water. 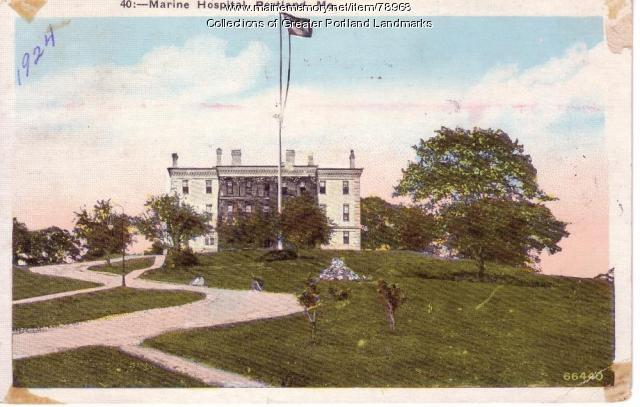 When the Marine Hospital was built, Smith had already commenced digging the canal through the foot of the point. This meant that all traffic, for construction and thereafter, would need a bridge to cross the canal. Smith was more than willing to allow a bridge to be built over his property so long as the proprietors of said bridge, most bridges were built with private funds then, were willing to pay him a fee for the right. In the end, the canal was filled as it was never completed. Some remnants can still be seen today in the spit of land caught between the river and interstate 295.

In August of 1898 Mark Jordan, a local landowner, filed a plan with the registry of deeds for the development where our subject sits. It was to be called Ocean View Park. The document lists one JW Wilbur of Massachusetts as the owner. 2 months later, the same plan was filed but Mark Jordan’s name is no longer on the document. This would imply that Jordan had sold the land to Wilbur but I cannot find a deed for the transaction. I cannot find any deed giving JW Wilbur possession.

Jacob Wesley Wilbur was born in New Gloucester Maine in 1846. He started working on the Grand Trunk Railroad and moved to Boston to become a streetcar driver. In 1888 he started a real estate business. His specialty became buying plots of open land, platting them, having the utilities and streets built, then selling the lots. He rarely built spec houses usually leaving that to the buyers. Some of which were builders and developers who would build the houses. He did many developments in Arlington, Newton, and Brookline Massachusetts. Locally, he developed Ocean View Park along with 2 different developments off Brighton Ave around Pinetree and one in South Portland near Rigby. 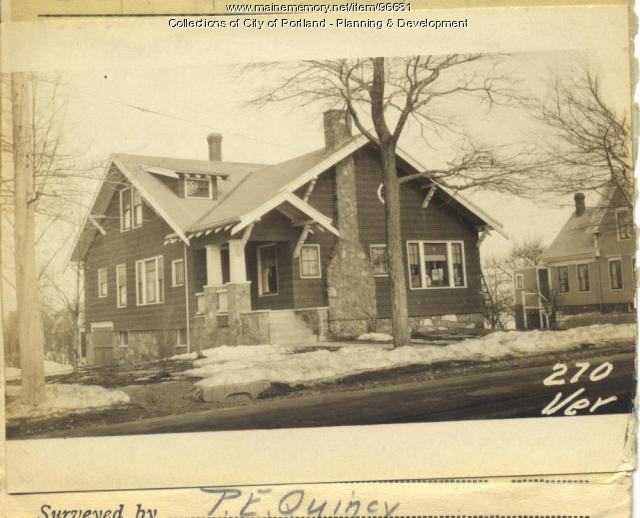 Our subject house was originally a rectangle measuring 33′ x 46′ but has since has had the inset porch on the front enclosed and a had an addition at the rear which runs north in an ell. The small dormers on the front facade have been enlarged into complete rooms and their ornamental windows replaced with narrow sash units. The 1924 photo shows what looks like a 6 sided window on the 2nd floor of the street facade. This seems out of place for the style and has been lost in later changes. The siding is cedar shakes that may have been stained but appear to be painted now. They are laid in a pattern called ‘ribbon coursing‘ with alternating rows on long and narrow exposures. The brackets are quite expressive for Arts and Crafts and may have been a builders flourish.

Harry Ricker was a ‘local boy’. He grew up in East Deering as the son of a steamship engineer. He became one himself. He never married and spent much of his life residing with relatives of various types but for a while when he was living in NYC. This is seen in a deed from Jacob Wilbur to Harry of 1908. The Ricker family owned the land between Ocean View Park and the tip of Martin’s Point. The 1910 directory lists 2 of Harry’s aunts and a sister living there. The 1908 deed was for the 2 lots adjoining the family property. In 1915 he purchased lots 150-152 at the corner of Veranda and Oregon Streets from a widow named Georgia Johnson. He built our subject and sold the property to Christian Jurgenson in July of 1916.

Clipping from the plan for Ocean View Park showing the lots for our subject. Cumberland County Registry of Deeds.

Christian Martin Jurgenson was born in Denmark in 1876. He came to the US in 1888. He may have traveled with his mother but this is not clear. A Christian Jurgenson appears in Portland in 1910 when the city directory listed him as a gardener for the Cumberland Club and living on South Street but I’m not sure if it’s our man. In 1911 our Christian married Helen Wade, the daughter of Irish immigrants. On the certificate, he gave his residence as California and his employment as a mining engineer. On June 9 of 1912, Helen gave birth to a boy named Wade. Helen died on June 10 and Wade on June 13. They were buried in her family’s plot in Cavalry Cemetery.

When he purchased our subject Christian took out a mortgage for $1500 at 5% payable over 5 years. The mortgage was marked as paid in December of 1921. What led Christian to pick this spot is uncertain but the 1910 directory & 1920 census do list several Danish families living in the neighborhood. It may also have been his bride to be, Gladys Atkinson, who chose the location. Another factor may have been Christian’s job which, by that time, was a supervisor at the JJ Nissen Bakery on Washington Avenue. The street railways to Falmouth and Yarmouth passed the house on Veranda and stopped at the bakery so it would have been an easy commute. 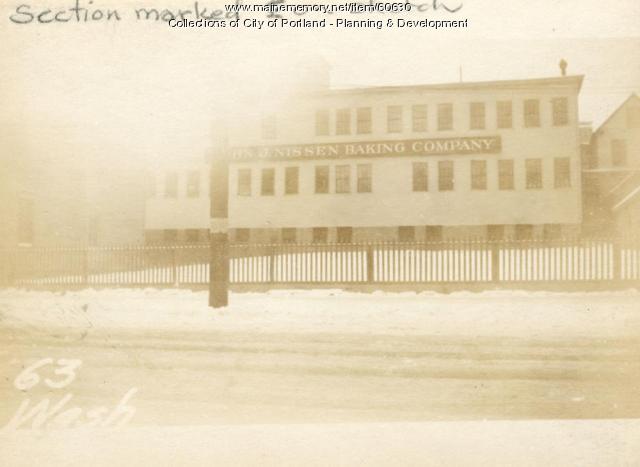 John J Nissen Bakery on Washington Avenue in 1924. The address is incorrectly labeled on the web page but correct on the photo. Maine Memory Network.

Christian and Gladys were married in 1917. She was 20 years younger and had grown up in Bar Mills. They had one child, Robert, in 1922. Christian worked at the bakery until retiring sometime in the 30s. In 1953 the property was placed in a trust overseen by Robert. It may have been that Christian and Gladys knew their time was limited and wanted to ensure their legacy. Whatever the reason, it was a wise decision as Gladys died in 1955 and Christian in 1956. In 1962, the house was sold to Bernard & Marjorie Cardali. Bernard was a clerk for the Post Office on Forest Avenue. The following year, the Cardalis sold to a coworker of Bernard’s named Joseph Sylvester and his wife Mildred. They remained there through Josephs’ death in 1992 until 1998 when Marjorie sold it to a couple from Phoenix Arizona.

270 Veranda is listed as a 2 family dwelling. The condition is very good.