A pre-war Queen Anne in the Deering Highlands neighborhood

With a total of 3 families owning our subject over its 105 year life, this was one of the easiest to research. It may be one of the shortest as well. The land had been part of the Fessenden Park Extension filed by our old friends Marks and Earle in 1899. They sold a large chunk of what is now Deblois and Orland Streets to a builder named Elbridge Johnson that same year. Johnson and his wife Ellen lived in Stroudwater village where his family had farmed since the 1740s. It would seem he ran a substantial business as the 1910 directory, published 2 years after his death, listed Elbridge G Johnson Builders as having an office and shop at 52 Cross Street. After Elbridges death in 1908 the property was divided among his heirs with the eldest son, Chester, receiving the land under our subject. He sold it to Louis E White in November of 1909. 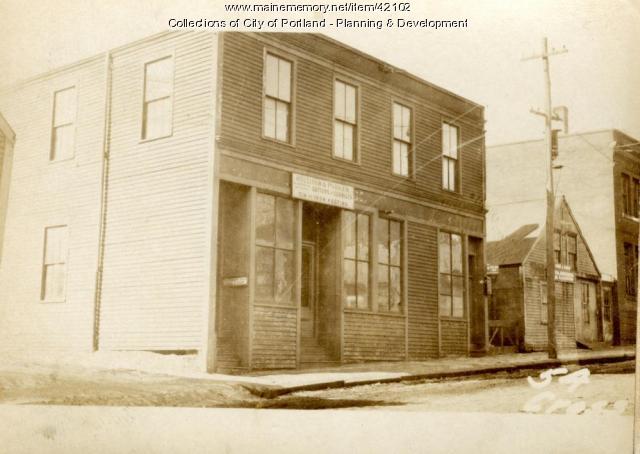 Louis and Edna White were married in Concord New Hampshire in 1904. Louis was born in Newburyport and was one of the first graduates of the Massachusetts Institute of Optics. He first worked in Concord NH, where he met Edna, before moving to Portland in 1906. He started working for the H.E. Murdock Company in Congress Square upon his arrival and went on to become owner and president. The Whites had 2 sons, Munson in 1910 and Elmer Jr. in 1914. 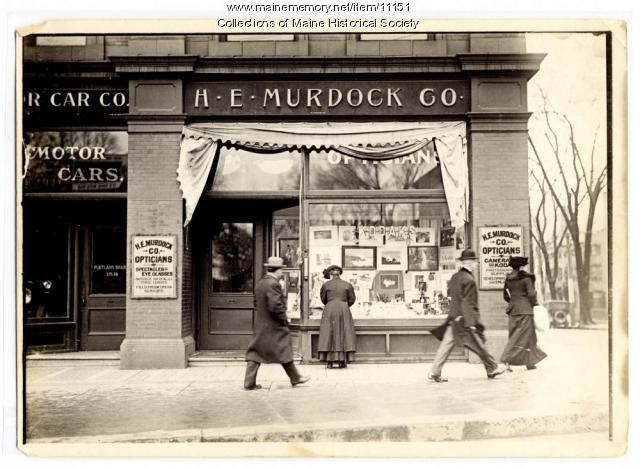 In 1910 the Whites took a mortgage for $3500.00 from the Portland Savings Bank. It would seem likely this was to build our subject house. What they built resembles in many ways the Purrington house at 70 Ashmont Street. The main block is a rectangle measuring about 33’ x 36’. It’s 3 stories tall and, unlike the Purrington house, is oriented with its gable facing the street. The details are all from the Marks and Earle canon and would lead me to believe the Whites most likely purchased a plan or whole house from M&E. At 3 stories and 2400 sq/ft of living space, it’s a substantial house for a family of 4.

The Whites lived at 21 Deblois Street through the teens, twenties and into the 30s. Louis was a singer who was heavily involved in local musical activities. He was the president of the Portland Men’s Singing Club. During his tenure the club would twice sing for the noted publisher and Portland native Cyrus Curtis. He was a member of the Woodfords Club, the Portland Society of Art, the Kiwanis and several other organizations. He died in 1936 at which time the property was passed to his sons. In 1946, they transferred it to Edna. She lived there until 1955 when she sold it to Samuel and Lillian Fineberg. Edna lived until 1973 when she died at 91 years old.

Samuel Fineberg was born in Halifax Nova Scotia in 1913 to a Russian peddler and his Polish wife Freda. The family had immigrated via St Albans Vermont in 1919 and settled briefly in the south end of Boston before moving to Portland in 1922. Samuel graduated from the Massachusetts Institute of Optics and operated his own office for many years in the Arcade of the ‘Time Temperature’ building. He married Lillian Smith in 1943.

Lillian was born to Samuel and Mary Smith in Portland in 1919. The Smiths were also Russian/Polish immigrants who had come to the US in 1914. Samuel managed a clothing shop in Portland. They lived on Union Street. When Samuel and Lillian were married, she was working as a hairdresser. Later she worked as an operator for ‘Ma Bell’. The Finebergs sold 21 Deblois Street to Brian and Martha Hawkins in 1974. The deed for this sale gave the Hawkins address as 21 Deblois Street so it would seem they were renting the property. Where they were living is not noted. Samuel and Lillain FIneberg moved to Florida in the 1990s. Lillian died there in 1998 and Samuel in 2009.

21 Deblois Street is listed as a 1 family dwelling. Condition is excellent.