A modest brick Greek Revival in the Bayside neighborhood.

Ira Brett was a builder by trade. He was listed as a joiner or carpenter in the city directories of the period. This is interesting as most of the buildings we know he built are of brick. Ira was born in Brockton MA in 1801 being the youngest of Amasa and Pheobe Brett’s 4 children.  He married Mary Hall King in Portland in 1827, the same year he purchased pew # 88 in the Union Society meetinghouse on the corner of Cumberland and Casco Streets for $30. He wasn’t just a carpenter. When he first came to town, he and Eaton Shaw ran a variety store in what is now known as Monument Square. Ira and his partner lived on State Street in a house Ira built. Ira’s best-known project was the Park Street Church which he built for the Second Methodist Society in 1828.

Ira Brett purchased the property on which our subject was built from a chaise maker named Jacob Wilbur in 1859 for $410. At the time of the purchase, Hanover Street was newly laid out and not yet named. The same day he purchased the property, Ira took a mortgage on it for $475 from a joiner named Charles Webster. In the next 12 months, Brett took 2 more mortgages for a total of $850 from a merchant named Joseph Wilson Jr and Sewall Chase. It’s possible the Chase Brothers, Sewall, and Edward built our subject. Chase’s mortgage was noted as paid within 3 months of it being taken out.

What they built was a brick block 23′ wide and 32′ deep. Attached to this at the rear is a wooden block that is 18′ wide by 32′ deep. Both structures are 2 full stories tall. The attic level of both structures has been altered in later years to create full floors. The brick block is basic. Nothing breaks the surface on the wall but for the openings and a set of projecting courses delineating the bottom and top of the frieze. The window openings are clean cut with thin narrow casings and relatively thin, rough-faced, granite sills and lintels.

Ira and Mary Brett and their 4 children, Frank, John, Joseph, & Sarah, a fifth, Henrietta, died in 1850 at the age of 13, lived at 14 Hanover Street for 6 years before selling the home to Stephen Whittemore in 1855. I do not believe they moved immediately as the 1856 city directory has them at our Hanover Street location. In 1857, Mary purchased a lot facing Portland Street below the Hanover Street house on which Ira built a large Greek Revival house of wood. It was there that Mary died in 1860. Ira and the family stayed on at Portland Street with the 1873 directory noting all 3 sons working in the trade with their father. Ira died in 1887.

The entry portal keeps with the understated character of the house. Simple square pilasters of wood with rectangular capitol blocks support an overly diminutive architrave. Above this is a bold dentil line that is capped with a small cornice that projects from the brick wall. The entry is inset with the side walls having simple rale and stile decorations. The door itself is surrounded by 4 pane sidelights and capped with a pediment that is striking in its bold simplicity. A possibly earlier entry decoration is hinted at on the right-hand side of the door. Here a strong quarter-round molding runs from a chamfered plinth up the height of the door. This molding is broken at mid-height by a block that is chamfered on the bottom and top. Another block similar to the plinth caps the molding although it is not as well integrated. This motif is much more Greek Revival than the plain casing of the entry as we see it now.

Enhanced image showing casing on the right side of the entry.

Stephen Whittemore was a trader and merchant who spent all of 4 years on Hanover Street before selling to another trader named Alphonzo L. Gilkey in 1859.  Gilkey was born on a farm in Limington in 1829 and came to Portland in 1854. 1854 was the year he became a junior partner in the Byron Greenough Company. He married Susan Cook, the daughter of a shipmaster who lived on State Street, in 1856. Their son Joseph was born in 1858. Mary was born in 1860 and Elizabeth in 1867. Alphonso sold our subject in 1869 and the family moved to Winter Street.

14 Hanover Street was purchased by another Byron Greenough partner named Prentice Manning. He and his wife Helen lived here until 1880. Theirs is a sad story. Out of 7 children born to them between 1863 and 1879, 4 did not see their 1st birthday. A fifth died at the age of 9. It was during the Mannings residence, 1877, that the city ran sewers from Congress Street down Casco Street to Cumberland Street. The line then ran under Hanover Street to Portland Street. It was noted that the area was all ledge and the cost per foot was higher due to this. Prentice and Helen were assessed $75.21 as their share of the costs.

1884 Sanborn insurance map showing Hanover Street and the sewer running down it. Library of Congress.

After the Mannings, Horace and Mary Pride occupied the house. The Prides had married in 1879 at the ages of 29 and 28 respectively. They had no children. Horace was sickly, the 1880 census noting that he was partially disabled due to bronchial issues. He did work as a patrolman in the pulp mills in Westbrook where, it was reported in the December 27, 1880 issue of the Portland Daily Press, he “mangled his foot … by catching it in an elevator. Horace died of tuberculosis in 1889. Mary remarried twice before dying in Salem Oregon in 1925. 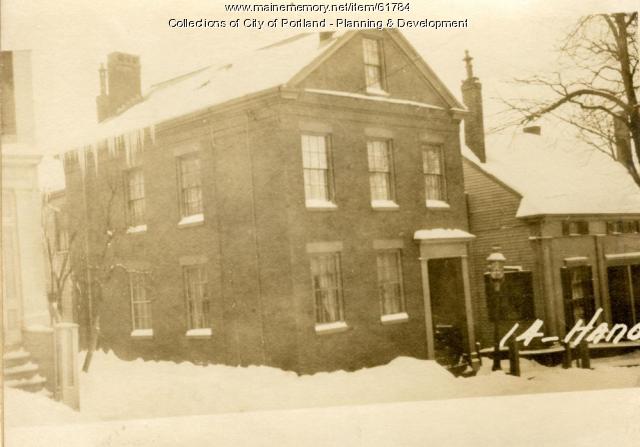 Margaret Ellen Gould purchased 14 Hanover Street in 1888. She was born in Raymond in 1845. She and Isaiah Gould married around 1869 and moved to Portland after 1880. They had no children. Isaiah worked as a night watchman. They moved back to Raymond between 1900 and 1910 but retained ownership of our subject until Margaret died in 1943. In the interim, they rented out the home as 2 apartments. Among the residents were:

14 Hanover Street is listed as a two-family residence. Condition is excellent. The first-floor unit is listed on Airbnb.