It’s the only place Frances ever lived. Apart from college, Wellesley in the early 1890s, and during the construction of our subject, Frances Chapman Champlin had always known this corner of Spring and Thomas Street as home.

2 Thomas Street from the 1876 Bird’s Eye view of Portland. Library of Congress

Frances’ father, Cullen Chapman, had built a home on this corner around 1865. We know almost nothing of what this house looked like but for a glimpse of it on the 1876 bird’s eye view of the city as seen above. It looks to have been a great pile of a building in the Second Empire mode. Cullen was a merchant and banker who had come to the city around 1860 having grown up in Bethel. He married Philophrene Grover of Bethel in 1862. Some documents say Philophrene died in 1871 but I cannot find any information to confirm that. The Portland Daily Advertiser for November 7, 1872, has a note that Judge Walton of the Maine Supreme Judicial Court had heard a case filed by Philophrene against Cullen for  “Libel for Divorce” which was settled out of court with a payment of $100 to Philophrene. In 1873, Cullen married Abbie L McIntyre, a Portland widow with a 9-year-old son named George after his father. Cullen and Abbie had 3 daughters, Florence, who died in 1888, Frances or Fannie, and Grace. Cullen died in 1903 and Abbie in 1904. 1904 was the year that Frances married Arthur P Champlin. 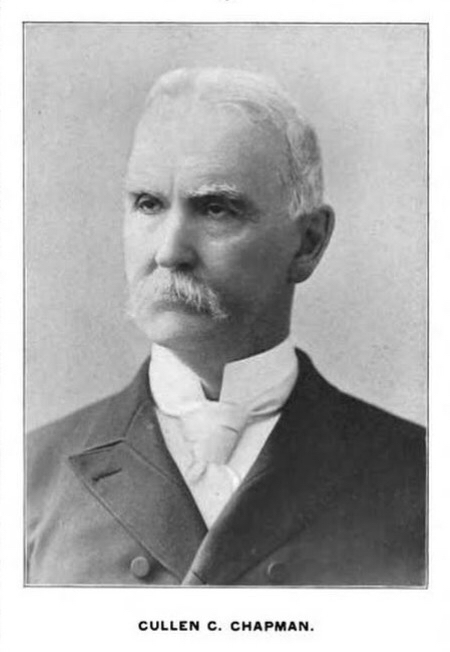 Arthur Perry Champlin grew up as the youngest of three children of James and Helen Champlin. They lived on Spring Street between May and Emery Streets. His father, James P, was a prosperous merchant and partner in Twichell – Champlin Company, a large wholesale grocery and canning firm on the Portland waterfront. The facility took up all of Richardson’s wharf with the primary building being a 5 story behemoth measuring some 50 feet wide by 370 feet long. It is now the home of Pierce Atwood Attorneys along with a pub and other businesses.

Frances and Arthur Champlin were married on April 7, 1904. They did not have any children until 1910 when Eleanor was born. James followed in 1912. They lived in the Boston area initially while Arthur oversaw operations of Twitchell – Champlin. In 1910, along with starting a family, they built our subject to a design provided by John Calvin and John Howard Stevens.

What was built is a brick block measuring some 60 feet wide on Thomas Street, by 30 feet deep on Clifford Street and the Spring Street side is 40 feet deep. There is an extension on the south-west side that is a four-season sun porch as well as a small ‘bump-out’ on the Spring Street facade. The house is 2 stories tall with a third under the hipped roof. The roof is slate and may well be original. The masonry is all done in a Flemish bond with an intensely bright white mortar. The first-floor windows are wide and fairly deep with stone lintels in the Georgian Revival style. The Georgian Revival is also seen in the balustrades on the 2 first-floor extensions and in the transom lights of the sun-porch. 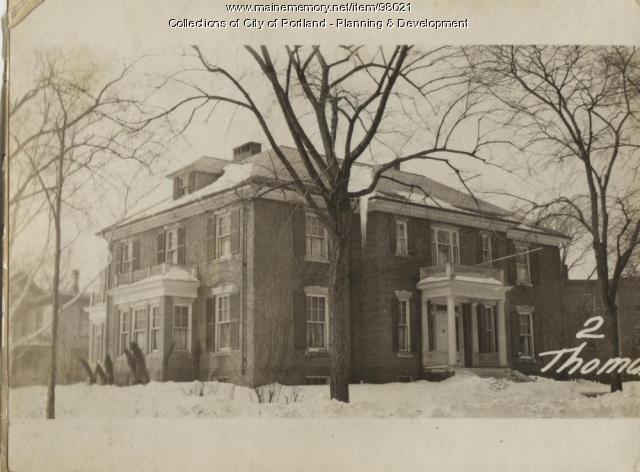 The Champlins were early adopters of the automobile. in 1908, the third annual Maine Auto and Boat Exhibition was held at the Portland Auditorium or Armory in the Old Port. A pamphlet (pdf) for the event listed Arthur as having no less than 3 license plates. They were numbers 128, 223, & 1776. An R R Ingersoll of Biddeford had plate # 1 and there were 2112 plate numbers used at the time of the printing of the pamphlet.  The couple had a substantially sized garage built on Clifford Street to house their automobiles.

Arthur Perry Champlin died on June 6, 1928. He was 55 years old. In 1931, Eleanor married Wolfgang R Thomas. Wolfgang was the son of William Widgery Thomas jr. and his second wife Aina Christina Lovisa. She was the sister of Thomas’s first wife and of noble birth. Wolfgang had inherited several million dollars and thousands of acres of land in the US, Canada, & Sweden when his father died in 1927. The Thomas’s moved to Belmont MA where Wolfgang was involved in manufacturing and real estate development. James Champlin married Edna May Kingsley in 1938. They had a son, Arthur, in 1939. James died in 1945.

The entry portico is an understated affair. 2 flights of granite steps take us to the porch which is supported by Doric columns and pilasters. The entry is a paneled door that has side-lights and a transom in the Georgian Revival mode. This porch is sheltered by an overly heavy cornice. The ceiling is deeply coffered. On this sits a balustrade matching the others on the house. The porch is flanked by narrow windows. All of this is contained within a central pavilion that projects slightly from the plane of the main block. This is a feature that truly marks the house as a Georgian Revival.

After Frances died in 1944, 2 Thomas Street was sold to Oliver L Loring. Loring was born in Newton MA in 1904. He graduated from Harvard University and the Virginia Theological Seminary. He married Elisabeth Brewster in 1935. Loring was consecrated as the Bishop of the Episcopal Diocese of Maine in 1941. He served until 1969. Loring was very active and much loved during his time as bishop. The building housing the offices of the diocese is named for him. He received an honorary degree from Bowdoin College (pdf) in 1945. Bishop Loring died in 1979.

2 Thomas Street is listed as a single-family residence. Condition is excellent.