Welcome to part two of a focused look at the life and works of Charles Quincy Clapp. In part one, I looked at his early years and some of his earliest, mostly commercial, works. In this section, I am going to focus in CQ’s domestic work, both for himself and as part of the family’s investments. 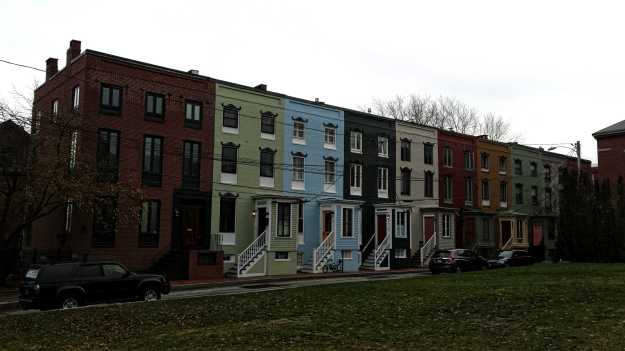 Starting in 1831, Charles Quincy & Julia Clapp constructed a new home for themselves on Spring Street. Although no record of the public’s reaction exists, it must have been astonishment. 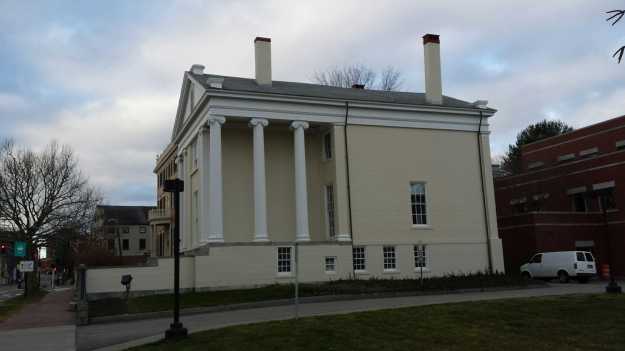 CQ had already shown a flair for impressive designs. Here he leapt to new heights. He created a synthesis of Greek and Roman forms with a bit of federalist detailing added in.

The Greek wars for independence from the Ottomans which ran from 1821 through the early 1830’s were much publicized and discussed in the American press. The 50th anniversary of the American Revolution landing in the middle of this period only heightened the nation’s interest.
Another media attracting attention at this time were publications describing, and often presenting drawings of, classical buildings and ruins from Greece and Rome. The information they presented had been available to a cognoscenti for some tine, Thomas Jefferson built a substantial library of them. Twice. The major difference now was larger scale publication methods increased availability and reduced the costs. We can assume CQ owned some of these as well.

The form is a Greek temple but the colonnades run the full length of the front block on each side. At the back is a block running the full width creating a modified cross form. The center section of the building has been pushed forward to the very front. The corners of this block are attached pilasters. The columns and pilasters are all in the Ionic Order. The scale and proportions are very good. The voluted capitals are well sized with the corner units having proper double facets. I particularly like the scale and shape of the bases.

Clapp placed his entrance on the left at the end of the colonnade. In this he was following, or creating (?), tradition for the Greek Revival style of a gabled facade with the entry placed on one side. CQ’s door is a somewhat traditional panelled door that is very forward looking with it’s rounded forms and floral insets. These rounded and floral motifs are repeated in the second story window on the front.

All of this rests on an elevated cellar that is very much Roman in origin. Although Greek temples sat on an elevated dias the stairs to the temple tended to wrap around the entire structure. Roman temples often sat on strongly elevated bases with access limited to steps at the front. That Charles took some references from the Maison Carree in Nimes could be made solely on the basis of the raised platform. CQ may have seen it in a publication.

Here, I think, his intention was to match the elevation of the house next door, which he happened to live in. This house was built on an elevated spot specifically to emphasize its height. The architecture firm of Mills Whitaker posted, as part of their work on restoring the building after PMA acquired it, a pdf with floorplans and interior photos. The circular staircase, more federal than greek, is beautiful. 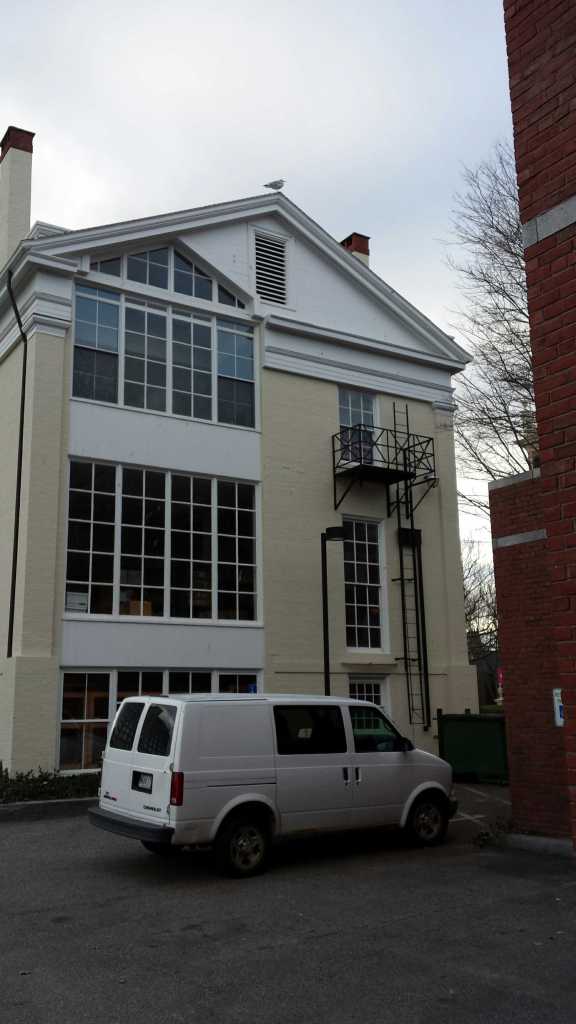 Rear view showing modern fenestration installed when the house was owned by MECA.

Charles and Julia lived in the house for only 5 years before moving back to the house next door upon the death of Julia’s father. 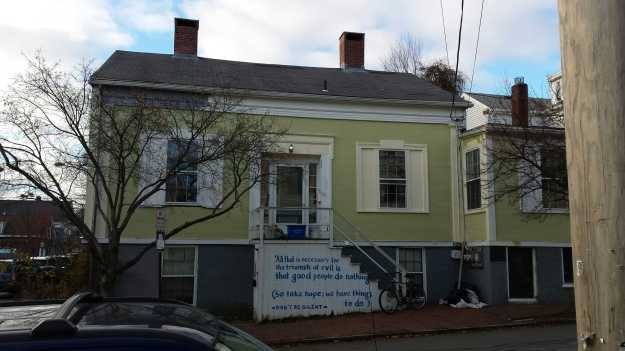 In 1837, CQ designed a double house on the corner of Bracket and Salem Streets. It’s a modestly scaled building but carries several features that place it in the same oeuvre as the Spring Street house.

The house sits on a very pronounced base. The slope of the land requires some base but here it’s purpose is to emphasize height. It gives a feeling of strength and makes the house seem larger than it is. 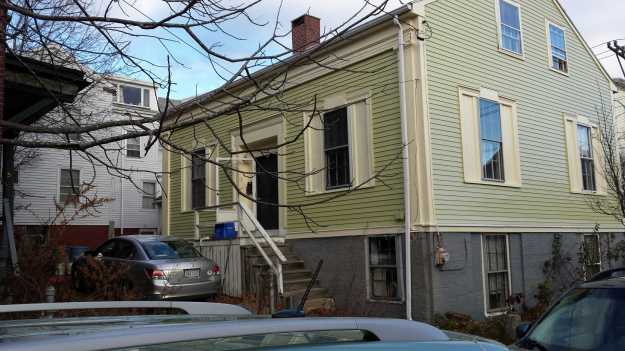 Charles Quincy’s next projects would show his innovative nature and a willingness to follow his own creative path.

In 1845, the Clapps decided to undertake the building of a row of houses on the lower end of Park Street. Called Park Place, these would be much different in design and intent from anything CQ had undertaken before.

Seated on a narrow but deep lot, Park Place was developed with the working class in mind. The overall concept was for 10 units. The ends would be 3 bays wide while the inner 8 units were 2 bays. All were 2 stories high with a 3rd in the garret. All were built of brick with wood and iron trim.

It’s the overall design integrity and use of different materials in the windows that set this row apart. Instead of the common, almost ubiquitous, sash window, here CQ chose casement. This in itself changes the feel of the window by removing the muntons and leaving large panes of clear glass. These windows are extra deep on the first floor, a common element for Clapp. All the windows are set in openings that are larger than the units. The remainder filled with wooden panels. The center units have iron decorations over them in a ‘moustache’ style. The windows on all the other elevations are of the common sash style. No doubt as a cost saving measure.

The center units are also differed in having wooden projecting entrances on brick bases while the ends have simple brick bases. Without knowing the Clapp’s intent at the time they built the row, it’s a bit hard to determine if it was a success. A brief look at the deed history show unit 1, the larger end unit, selling to Charles Staples and Horace Bartol in 1853. Unit 6 was sold to Charles Frost in May of 1849. Unit 2 did not sell until 1856. Interestingly, the sale of unit 6 shows Gerry Cook & Moody Walker as co owners while the others I have reviewed show Charles Quincy as the sole owner.

At about the same time they were developing the Park Place row, the Clapp family undertook the building of a row of 3 houses on the upper block of Park Street. These would be more upmarket than Park Place and displayed a more refined style.

Built of brick, the row is 2 stories with a garret all under a low hipped roof. They sit on a low base with each unit accessed by 8 granite steps. The windows have slim sills and heavier lintels all of granite. 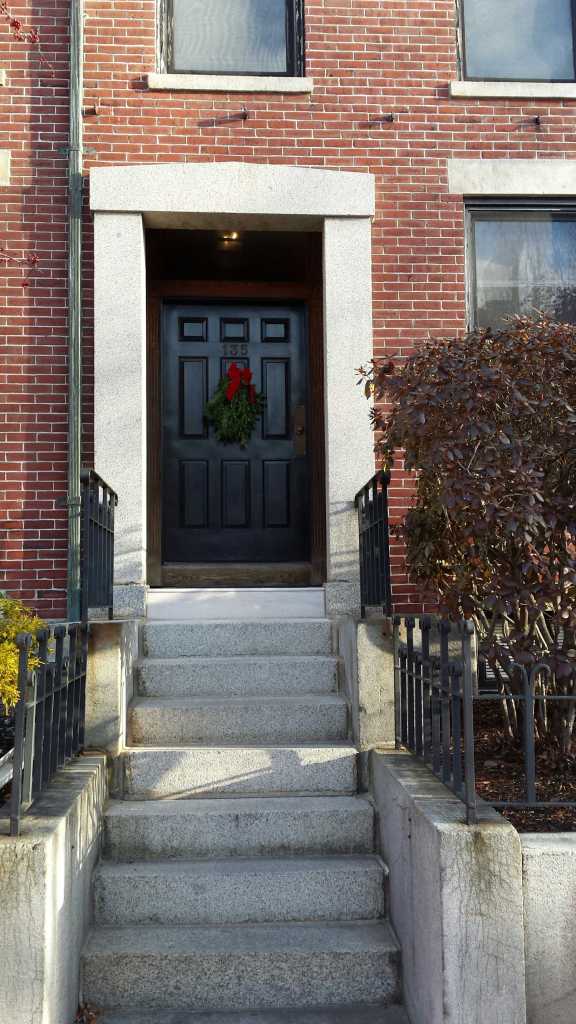 The entries are flanked by pilasters that are devoid of detail but overcome this by their sheer mass. Above is a, again extremely plain, pedimented header. These features as with the steps are granite. The entries may be ‘plain &  simple’ but they are incredibly powerful from a symbolic level. The feelings of solidity and longevity the project is no doubt intentional. A ‘solid’ building being easier to sell.

The end walls are bare but for a set of windows at what may be a middle stairway.

Missing from the current facade is an iron fretwork panel running the length of the block in the zone between the first and second floor windows. The attachment points are still there. The 1924 tax image gives a vague view. This development seems to have been successful as all 3 units were sold when the row was under construction in 1846. As a note: Asa Clapp the younger provided a mortgage for two of the units. The middle unit would be owned for the 1870’s and 80’s by Malcolm Hammond whose house on Mellen Street has previously been featured on this blog. 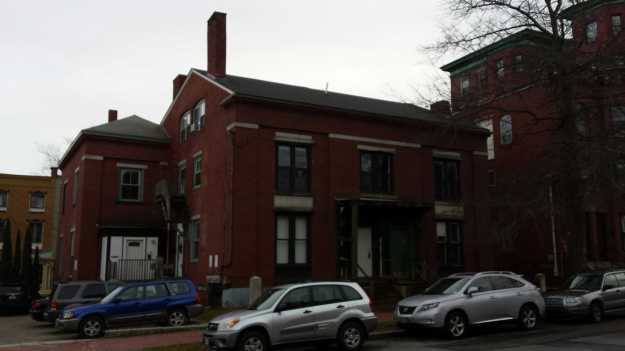 On Danforth Street, just in front of the Park Place Row, is a duplex building built by the Clapps contemporaneous to the rows. In forlorn condition, it gives a final glimpse of CQ’s innovative nature.

In December of 1847 Nathaniel Gordon the lot with no building from the trio of Clapp, Gerry and Walker.  The Portland Directory of 1823 lists Nathaniel as a shipmaster. In 1849 he transferred the property and house to his son Nathaniel Jr. By the close of 1849 Nathaniel Sr was dead and buried in Western Cemetery. 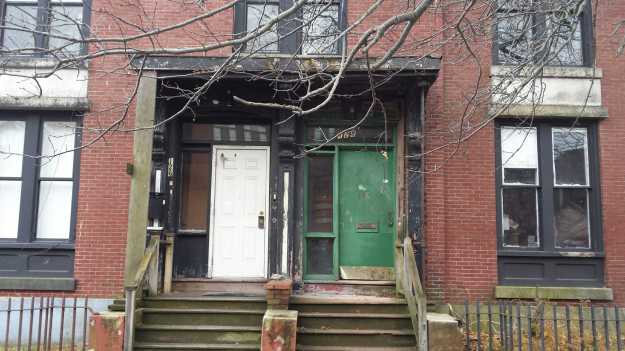 The house is a large brick block with ells of unequal size projecting from the rear corners. The front facade is made up of heavy brick piers with niches in between for windows and entries. Here again we see the windows set in recesses that are much larger. The spaces between filled with wooden panels below the windows and granite spandrels at the belt line. Also of note, the windows are tall sash type.

The use of thin granite slabs as capitals is very unique. Note the very fine dentil line at the cornice.

I find the subtle arch of these windows to be very appealing. As a final item we have the house at 79 Park Street built in 1851 for John B Carroll and his wife Julia Carroll. Julia was CQ & Julia Clapp’s daughter. Based on this familial connection, the design of this house is often, not without merit, attributed to Charles Quincy.

I am not convinced. There is so much of this design that is outside of what Charles Quincy was doing in the period, in the same neighborhood 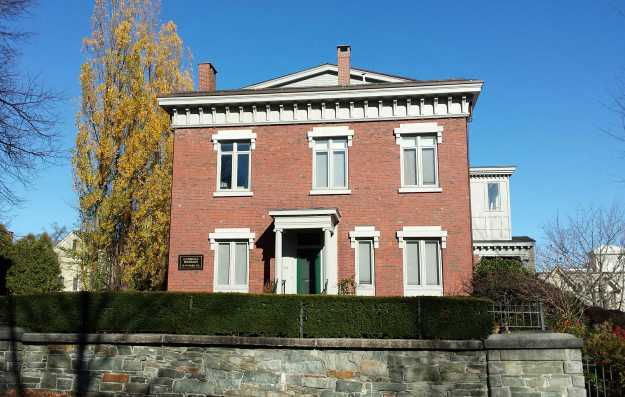 The very form itself, a rigidly formalized Italianate cube, is something CQ had not done before. Add in the heavily ornamented entries and the oriel window and it’s completely out of character.

Perhaps it was the ‘client’ that drove the design. John Carroll was a successful tobacco merchant and was active in civic affairs. It may be that he and his wife insisted on a ‘modern’ design. The casement windows in tall openings are certainly a feature seen in other works by CQ.

The Carroll house is noted for the former stables now part of the building and the large lot, with a pool, overlooking the Morse-Libby House. This concludes the extended look at the domestic works of Charles Quincy Clapp. The final chapter will look at CQ’s last years. It would be a time of conflagration and rebirth.

Author’s notes:  The primary source of biographical information for this article is drawn from Joyce Bibber’s bio of Charles Quincy available at the Maine Historic Preservation’s website.  I am, as always, indebted to the Maine Historical Society and the Maine Memory Network for the ever increasing body of information and old photos.