12 Atlantic Street is a fairly common form for the city. The main block is 2 bays wide, 2 bays deep, 2 stories tall, and has a third story in the garret. The ell off the rear is 1 bay wide, 2 bays deep, and 2 stories in height. The overall style is Italianate with some Gothic, Greek Revival, and Federal influences present.

Situated on the slopes of lower Atlantic Street, the house presents two distinct feelings of mass between the west and east sides. Overall it is well scaled and fits the lot comfortably.

Harvey Garcelon was a merchant listed at 6 Atlantic Street in 1856. A William Garcelon was an apothecary listed at the same address. Although there is no documented link, some features along with the construction date lead me to think the house was designed and built by Thomas Cummings.

It’s the bay window that most directly speaks of Thomas Cummings. The grouped windows with archtops and well-detailed moldings are a feature we have seen in his work before as is the compressed Roman arch above.

The gothic treatment of the entry roof isn’t what one would expect from Cummings work but it could be the client insisted on it. The arched top doors behind it are in his style. The posts with carved balls inside them are unique, to say the least. 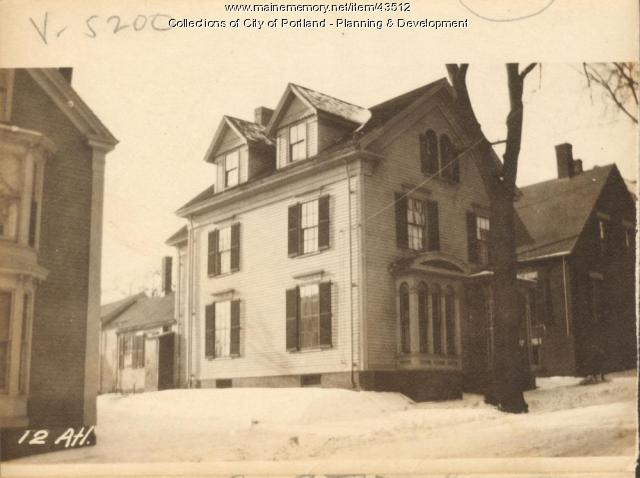 Some other owners and residents of note.

Maria M Graham owned the home from 1873 to 1884. She resided in Montreal and had married a Lieutenant in the New Brunswick Fencibles. Maria had written about traveling to and living in South America in the 1820s.  Her son John was a clerk for the Montreal Steamship Line living in Portland. He inherited the home on his mother’s death in 1884 & lived there until he sold it in June of 1893.

Maria had purchased the home from Charles B Strout in August of 1873. Strout was a deputy collector of customs at the time. He had purchased the property a mere 4 months earlier from one G Howard Proctor. He was a foreman in the boiler shop of the Portland Company. As the facilities were located in the harbor below the intersection of Fore/Eastern Promenade and Atlantic Streets, he could have slipped and fallen at his front door and simply rolled down the hill to work.

Observant readers may note the 3 transfers happening in 1873. To that, I add one more. Henry Proctor had purchased 12, then 6, Atlantic Street from one Harriet Marwick in February of the same year.

Scarfed joints are signs of substantial age for a clapboard. Both side walls show these joints whilst the front facade shows modern butt joints.

Finally, we have Captain Hugh Alexis Farr. Farr was born into a large family of sailors and shipbuilders on Ash Cove Point in West Harpswell in 1843. In 1867 Hugh married Lucy Bibber, the daughter of another local family. Lucy was 17 years old. When they moved to Portland is not certain. They are not listed in the 1873 registry but birth information for their children puts it prior to 1880 when Susan Adelaide was born in Portland.

Hugh purchased 12 Atlantic from John Graham who was at that time living in Ontario in 1893. Perhaps he and Lucy were already renting the property. Hugh died in 1928 & Lucy in 1941. On her death, the house passed to Susan. Susan died in 1949 at which time the home was willed to her elder brother Charles. He sold it in 1950. The house is still a 1 family home and is in very good condition with the claps on the front appearing to have been replaced in the last 5-10 years.