Built for Henry Merrill in 1898

Henry Merrill worked for Randall & McAllister Fuel in 1898. The deeds have Henry’s wife Mabel as the purchaser and the tax record for 1924 lists her as the owner of record. 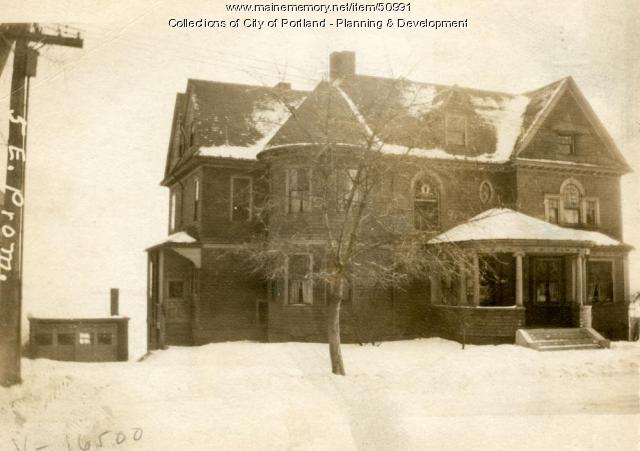 The house is classic Queen Anne ala, John Calvin Stevens. From the shingle-inspired paired gables on the northeast side and recessed window in the street gable to the colonial Palladian window, dormer, and stained glass panel to the multiple turrets, it’s all the details boshed, perhaps a bit uncomfortably, into one block.

Stevens had moved into a more refined Colonial Revival style at the turn of the century but he could step into Queen Anne if needed. One can surmise the Merrills preferred the style. Whatever the reason, John Calvin delivered.

The overscale bracket of the porch roof is a touch of whimsy for a functional object. A band of nicely scaled modillions mark the eaves. You can just see Stevens trademark pared gables above. Tax records have the garage constructed in 1900 making Henry and Mabel early adopters of the automobile.

The Palladian window is a bit chunky for its height and seems to be forced into the space. It’s well detailed with the ionic capitals and fine dentil line especially appealing. The composite decoration applied to the frieze and diamond form of the mullions of the first-floor window are pure Queen Anne.

Stevens was quite adept at drawing the eye ever upward

The window inset into the third-floor gable is interesting. The curved shingles are something Stevens used in other urban homes as well as his earlier shingle works. The prow above is unique for him but definitely in the Queen Anne canon. The subtle egg and dart molding in the gable is a nice touch that adds a layer of shadow to the surface.

An interesting stained glass window that takes it’s heavy hood molding from the Palladian window marks what I am taking to be the stairwell. It looks like the upper sash was fixed while the lower could be opened for ventilatíon.

There is a 3 story tower with a porch on the southeast corner of the house. Its location and the heavy tree growth preclude a better image than the one above. Note the Georgian detailed projecting window on the first floor.

A close look at the front facade reveals a change that happened after 1924. At some point, the double-hung window above the first-floor entry porch replaced the original oval window in that location. Perhaps the original failed and this was put in for cost reasons. Perhaps they wanted to get more light into the room behind. Regardless of the reason, it is something of a shame that the replacement does not relate to any other window on the facade.

Henry and Mabel would live in the home for the remainder of their lives. When they died is unclear. It would seem Mabel died in 1949. There is a Mabel A Merrill listed in Brooklawn Memorial Park with a date of March 2, 1949. She does not appear on any property transactions after 1947. More significant is a deed from June 20 of 1950 in which Henry is listed as a ‘widower’. In this deed, Henry transferred ownership of the property to his and Mabel’s only child, Ruth. I am unable to locate a copy of Mabel’s will.

Henry died in the spring of 1956 with his will leaving all remaining assets to Ruth. The 1950 transfer to Ruth was partnered with a lease from Ruth allowing Henry to stay in the house for a token $1.00 a year. Ruth had married Charles MacGowan prior to 1920, their son john being born in that year. Ruth and Charles both died in 1982 and John in 1999. At that time it passed to his son Carroll and his children who now own the home although they no longer live in it.. This is almost 120 years of ownership. A truly rare thing in today’s real estate climate.