Perched on a rise at the corner of Munjoy and Eastern Promenade our subject commands a major viewpoint on the Fore Street end of the Prom. It’s a mix of Italianate and Queen Anne styles with a rather odd treatment of the center second-floor bay. More on that later…

There isn’t much solid history for Mr. Jordan. He purchased the land from Lucy Heseltine in 1887. Beckett listed a James P Jordan who was a salesman and lived on High Street in 1872. This may be the same person but I have not found any deeds for our James Jordan referencing property on High Street. Beckett does list a John Jordan living on Portland Street and a partner in Jordan Brothers Carpentry. I can connect James P to the Portland Street property and an early deed for him states he was a ‘house builder’.

Things get more interesting. Beckett lists a Charles Heseltine living at 16 Eastern Promenade in 1873. He was a joiner or carpenter. It could be asked if perhaps Mr. Heseltine built the house. Perhaps. Stylistically, the house is more Italianate than Queen Anne which would lean towards Heseltine as the builder. Countering this is the wording of the deed from Lucy to James speaking of land only. This could just be a clerical issue but I try to take deeds at face value and as such, I am inclined to go with Jordan.

When James died in 1917 he left no heirs. In early 1919 the property was sold to William S Linnell. Linnell was a native of Saco where he was born in 1886. He graduated from Bowdoin College in 1907 and a law degree from George Washington University. He sold the property to Ethel Howard on the same day he bought it. Ethel transferred it to her husband Frank 3 months later.

The house sprawls over its lot in a connected farmhouse manner and sports a rather nice ‘barn’ if you will. More like a stable and carriage house in nature but having a classic barn look. The main block also has a farmhouse quality, especially when viewed from Munjoy Street.

The front porch and projecting third story gable with applied details is pure Queen Anne in nature although, when taken as a whole, the facade is quite reserved. About the bay window. It’s an odd feature that in some ways mimics the bay below and right but there is the door. I suspect it is not original. Perhaps added to give access to the porch roof. The lack of a balustrade seems to negate that use. Either way, it seems out of place along with the square windows in the band above. The tax photo does not show the house from the front precluding determining the bay arrangement at that time. 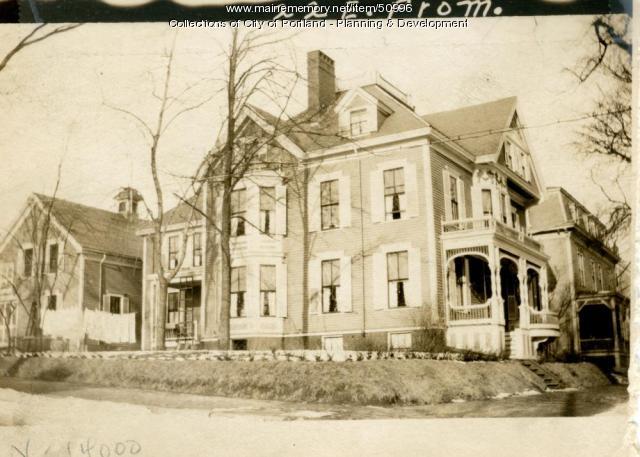 Frank Howard took a mortgage on 22 Eastern Promenade in late 1924. The bank foreclosed on this mortgage in 1933. They retained ownership until 1938. I think as it foreclosed in the heart of the Great Depression, the bank held the property and maybe rented it until the market rebounded.

After the bank sold the home in 1938, it changed hands every three years or so for a decade. In 1948 it was purchased by Thomas Schoolar. He was in born 1892. In June of 1948, Thomas married a Davina Fox of Yonkers, New York. The info for Thomas and Davina beyond that is scarce. I do know he died in 1979 and Davina in 1991. Both in Portland. They had sold 22 Eastern Promenade to Mary Mancini in 1963.

Mary was born in 1905 to Italian immigrants. She grew up in Portland and lived in the city, and our subject house, until she died in 1999. Her estate sold the property to Crandall Toothaker. Toothaker is a well-known developer and landlord who has a long, mostly good, history in Portland. As a final note, the property was transferred to a newly created LLC in July of 2017. Are condominiums soon to follow?