A modest-sized Second Empire Home in the Oakdale neighborhood

They called it the ‘Old Back Bay Road’ when Nathaniel Sawyer purchased the lot for our subject in what was then the Town of Deering from Edward Winslow in 1876. After Deering was annexed by Portland it would become today’s Deering Avenue.

Nathaniel’s history is spotty. He was born in 1829 in Portland to William and Hannah. William was a rope maker who lived on Newbury Street in 1823 and Oxford Street in 1858. Nathaniel is listed in the 1870 census in Deering with his father. Hannah had died in 1856. When his father died in 1876 he inherited William’s estate. More on that to come. In 1880 he referred to himself as a retired merchant living in Deering. It seems he also went by ‘Nathl’, ‘NC’ and ‘Natl’ as several documents I have found refer to these names.

The neighborhood would have been much quieter in 1877. The Foggs, Jonathan, and Phebe lived across Ashmont Street just up the hill but the rest of the area would have, presumably, been farmland. The Fogg’s house must have been quite the sigĥt with its naive Greek Revival exuberance. We will take an in-depth look at the house in a future article to be sure.

Nathaniel Sawyer died on September 10, 1883. He was 54 years old. His will ran to 5 pages which was allot in that day. He had some very specific codicils which we will look at in a bit of depth.

Nathaniel’s housekeeper was a woman named Maria B Handy. She was born in St Andrews New Brunswick in 1860. She was listed as residing with Nathaniel in 1880. He would recognize her service.

Third, to Maria B Handy, my housekeeper upon condition that she continue to faithfully and constantly serve me in said capacity as long as I shall live and not otherwise, I give and bequeath as a token of my appreciation of her fidelity and also to be in full satisfaction of all her claims upon my estate, 50 shares of the Capital stock of the Boston and Albany Railroad Company with all rights belonging to same at the date of my deceased and I direct my executor to transfer her the certificate of said 50 shares after 30 days from the qualification and acceptance when she shall execute a release of all demands upon my estate always in the above name condition that she shall continue to serve me as long as I shall live.

The Boston and Albany, B&A, was created in 1867 and would exist under various owners until the 1960s. The B&A may be best known for hiring the architect Henry Hobson Richardson to create some of the finest suburban train stations the country has ever seen.

As mentioned above, Nathaniel had received an inheritance from his father in 1876. It seems he was still in possession of some of that inheritance.

Fourth I advise and instruct my executor that I hold the sum of $3,930 belonging to the estate of my late father William Sawyer of Portland, deceased, the income of which my said father by a codicil to his last will bequeathed to me during my life and my executor is charged with the duty of restoring the sum of $3,930 to the estate of my father to be distributed and disposed of according to the provisions of his said will.

Nathaniel then dealt with household items.

Fifth. I give and bequeath to Henry Hamilton son of Jonas Hamilton the furniture household goods and wearing apparel in my house in Deering at the date of my demise but this clause of my will is not to be interpreted to include the two oil painting portraits of myself nor my watch, watch chain or articles of personal jewelry and gold ornaments of any kind.

Jonas Hamilton was the superintendent of the Portland and Ogdensburg Railroad. He lived on Oxford Street in 1873. Interestingly, Nathaniel is listed as a boarder of Jonas’ in the 1870 census. This would seem to indicate our man was counted twice in 1870.

The house is a pair of cross-gabled brick blocks in the Mansard style. Details are fairly conventional. The banded slate roof is a nice touch. It’s not a large home. It would seem Nathaniel, not having a family, practiced a modicum of economy when building his residence. The current garage is definitely of a later vintäge.

Nathaniel’s last two sections of his will are of most interest to us in that they deal with his real estate.

Eigth. All the residue and remainder of my property in the estate after deducting the expenses of administration I give, bequeath and devised to the Portland Institute and Public Library of Portland upon the following conditions that it is to say that the sum shall be invested and held perpetually as the fund to be known as the “Sawyer Fund” the accounts of what shall be kept so as to show that at all times the management thereof. The income of said fund shall be
exclusively applied to the purchase of books of permanent value for ferns being given to the words relating to physical sciences the books purchased with the proceeds of this fund to be the class that may be taken from the library. Each book purchased will the proceeds of for said shall be, in addition to and in connection with any other stamp adopted by the directors of the library, bear the stamp “Sawyer Fund”. The oil portrait of myself by Joseph Ames shall be placed and preserved with the Portland Institute and Public Library of Portland as a specimen of the work of the artist.

Lastly, there was this.

Ninth. In the case of the disregard or violation of the conditions named in the last preceding item of this will the bequest and devise and said item expressed shall be void and the said residue of my property in the estate shall revert to my lawful heirs living at the date of such breach of condition. 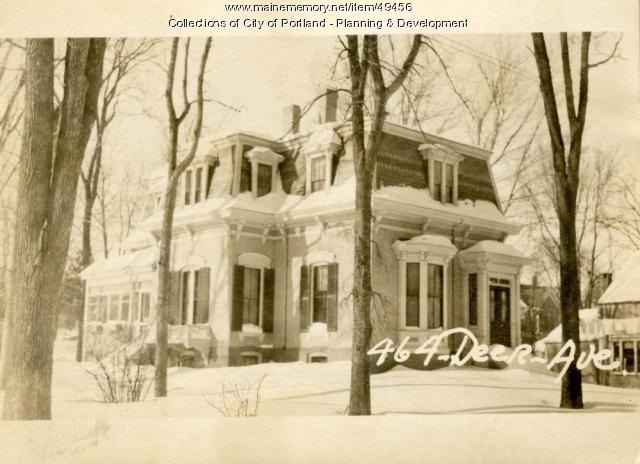 The Portland Public Library sold the property to Louis Laughlin in 1921. I have not found any documents pertaining to the sale beyond the deed so the cause of the sale is here unknown, Laughlin sold in 1924. It would change hands a couple of times before being foreclosed on in April of 1929. Charles Nichols was the note holder who foreclosed. He retained ownership until 1944.

Charles J Nichols was born in Portland in 1869. He would spend much of his childhood on his maternal grandparent’s farm in Greene Maine. In 1900 he was boarding with John & Clara Hill on High Street. 1900 was also the year Charles married Louise Vail. He had started dealing in real estate in 1894 when he purchased a property on Hanover Street. He woúld be involved in 68 more real estate transfers in the next 50 years. He died on June 12, 1949.

After Charles Nichols sold, there would be a couple of owners before being purchased in 1962 by John & Mary Cruise. John was born to Irish Immigrants in Brockton Mass in 1919. It was a very strong catholic household as two of his sisters would take the vows of the Sisters of Charity. James would serve in the Army in WWII. In 1946 he married Mary Siteman. Mary was a local woman also born in 1919. They sold the house in 1974. James died in 1995 after a career with the post office. Mary taught English in high schools from Jackman to Biddeford. She retired in 1976 and died in 2008.

The house is currently in good condition overall. The brick could stand a color wash to unify the shape as evidenced in the tax photo. The shrubs are overgrown. An attempt to soften the traffic noise no doubt. The current owner is on the faculty at the University of New England.