Modernism has been making its way into Portland slowly but with an increasing presence over the last few years. It’s time for us all to accept it

I‘m not getting on a soapbox. Spending time documenting the built history of a place will tend to make one more sensitive to the ongoing patterns. Your author has been noting the increase in new styles and theories in the fabric. I have been waiting for the right home to strike me. On a recent roam of the ‘Hill, this very new build on Quebec Street rang the bell.

Rosamond (Rosa) Caldwell was born in 1833. In 1860 she married Henry Bascomb Ridgeway. Henry was born in Maryland in 1830 He graduated from college in 1849 and was ordained as a minister in the Methodist Episcopalian Church in 1851. In 1860, he was seated as the pastor of the Chestnut Street Church in Portland. In 1862 he was transferred to St Paul’s in New York City. In 1888 she and her brother Samuel inherited the land for our subject from their mother’s estate. Rosa’s mother, Rosamond as well, had purchased the land from Dr. Eliphalet Clark in 1869. Interestingly, the 1850 US census shows Rosa living with Dr. Clark and his wife. At the time of her selling 38 Quebec Street, Rosa was residing in Evanston Illinois. Henry died in 1895 and Rosa in 1917. They were buried in Chicago.
In 1900 Rosa sold the land to Everett Johnson. A mere 3 months later, Johnson sold the land and a house to James Vickerson. As the tax photo of 1924 shows, Johnson built a fairly typical ‘east ender’ of one room and a hall/stair width and reaching back into its lot. The facade was vaguely Italianate with its bracketed entry and projecting bay. 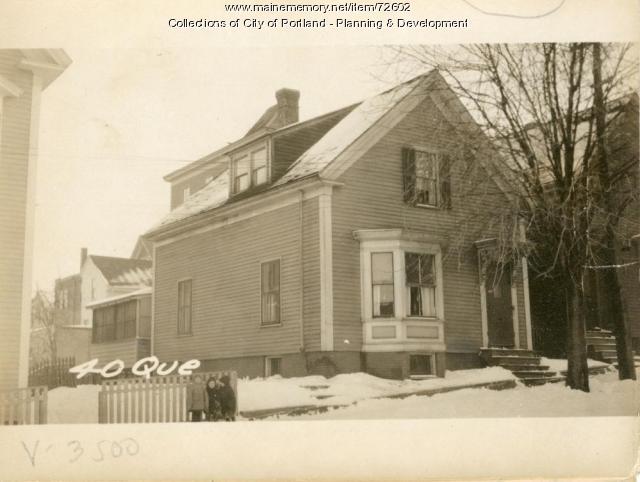 38-40 Quebec Street in 1924. The owner of record was Clifford Libby. Note the kids lined up in front of the fence. Image property of Maine Historical Society.

James Vickerson had immigrated from Canada in 1885. In 1912 James sold the home to Guy Vickerson. Guy’s parents, William & Susie, had come here from Canada as well. They arrived somewhere around 1883. We can surmise there was a familial connection between James and William.

The house of today is contemporary and displays carefully counterbalanced elements. Light and dark. Solid and void. Hard and soft. The functional placement of windows, especially the large grouping on the corner, is one of the factors that I find particularly inviting in this house.

The house is in essence two blocks stacked on each other. The lower block is a single story of concrete and is set back from the street forming a carport at the street side. The upper section is of three stories and is set forward on the lower block creating the roof of the carport. Materials are mostly in natural form.

The Vickersons sold the home to Edmund True in 1914. Edmund was a Canadian immigrant. He would own the property for all of 7 days. He sold to Clifford Libby on the 6th of February in the same year. Edmund was a Portland native. He was born on Lincoln Street in 1885. His father Thomas was a shipmaster and his mother Cora was a seamstress. Clifford married Marion G White in Portland in November 1915. Marion was 18 years old.

Clifford was drafted in 1917 and served until the war’s end in 1919. Clifford and Marion, Gertrude, had a son, Clifford juníor, in the same year. They would raise him in the house and stay there until 1942 when they sold it to Catherine Corbett. Clifford died in 1944 and Marion in 1980. Catherine and Patrick, who was also a WWI veteran, Corbett remained lived at 38-40 Quebec Street until 1951.

Joseph and Leona Malloy purchased the home in 1951. They took a mortgage for $5000.00 to make the purchase. They paid the loan off in 1966. Joseph and Leona would live out their lives at 38 Quebec Street. On Leona’s passing in 1990, her granddaughter Wafa Larochelle inherited the home. In 1995 Wafa and her Saudi national partner Hassan Aldhamen started E & W Import Export. They were involved in the modern spice trade importing foods from the middle east through Belgium. The last activity I can find for the company was in 2007. Her LinkedIn page says Wafa is now an analyst with Saudi Aramco. Wafa sold the home to its current owners in 2015. They demolished the old house that same year.