A pair of double houses designed by John Calvin Stevens, no relation.

They sit on Spring Street just west of High. Most people probably pay them little attention as they pass by. Spring is particularly busy in this area, a situation that makes studying and photographing them a challenge. But for the broad gable end facing High Street with its ‘v‘ form window arrangement, they might be unnoticed at all. This is something of a shame as they are early examples of a form John Calvin Stevens would develop and deploy across the city in the next 4 decades.

William Stevens was a native of Portland. Born in 1841, he worked as a bookkeeper for several firms before venturing into real estate in the 1880s. In 1900 he listed his occupation as ‘landlord ‘. He built our subjects with the intent of living in #120 and renting the remaining 3 units.

The details are Colonial Revival in nature although the overall forms are more Queen Anne in basis. Simple, symmetrical units share a chimney wall. Entries are at the open ends and are recessed into the building. This feature is something John Calvin Stevens had and would use many times over as we have seen on Thomas Street in 1894. They appear to have been modeled on the double houses Stevens and Cobb designed for John Deering and Jacob Winslow on Cumberland Avenue in 1887.

William lived at 122 Spring until his death in 1918. His will gave all of the properties to his widow, Mary, their son William C and the children of their late son Harold. The family sold all the properties in 1920. 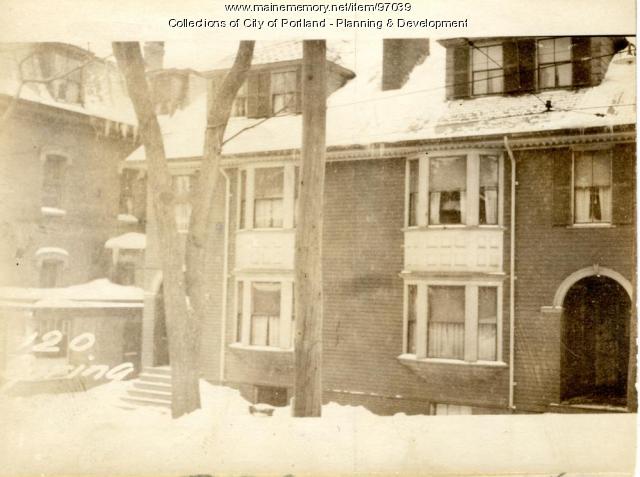 120-122 Spring Street was sold to Marcia Libby. She was a local who had taught music in the Portland School system. Her father, Charles, was a farmer and a descendant of one of the oldest families in Scarborough. Her mother and aunt, who grew up in Stroudwater as did William Stevens, lived with her on Spring Street. Marcia died at the age of 50 in 1932. When she died, Marcia passed the property to her aunt Katherine and her brother Lucien. 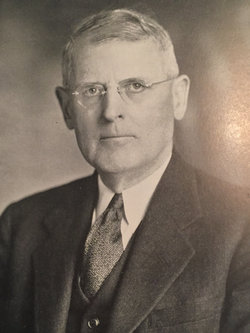 Lucien was born in 1877. When Charles Libby died in 1904 the family moved to a home Lucien had purchased the year before, now demolished, on Oak Street. He taught English at Portland High School. He had one very notable pupil in John Feeney, the son of a laborer who, in 1910,  lived on Sheridan Street. Feeney would go on to be better known as John Ford. In his 1945 classic “They Were Expendable” Ford would pay an homage to Libby by placing his name on the bow of a freighter in a dockside scene.

Marcia’s will also placed part of the Spring Street property in a trust, the income of which would go to her maternal aunt, Katherine. Katherine was widowed and, at the time of Marcia’s death, was working as a servant for a member of the Chenery family in Belmont, MA. Katherine died in late 1945. Lucien sold the house to Fred and Sarah Donovan in 1947. Fred drove a truck for the Portland Water District. Sarah ran a boarding house on Grant Street. It was a second marriage for both. After Fred’s death in 1966, Sarah sold 122-124 Spring Street in 1967.

Raymond and June Logan were the next owners of the double house at 120-122 Spring Street. They are also the last we will take note of. Raymond’s early history is unclear. He was born in 1916 or 1917 in Maine. Where and to whom is unknown. He seems to show up on the 1920 census as ‘Raymon’ which is a simple enough mistake. What makes the record odd is he was listed as a ‘boarder’ with a couple named Asel and Ida Smith who lived on Park Avenue. Raymon(d) lived there with an Asa O’Brien who was 3 years old as well. Why would they be listed as ‘boarders’ at the age of 3? Were the Smiths foster parents as we know the idea today? This is a question that is much bigger than this blog. Raymond, regardless of spelling, doesn’t show up again until the 1940 census when he’s married, running a filling station, and living in an apartment over a butcher shop and lunch counter on Congress Street. 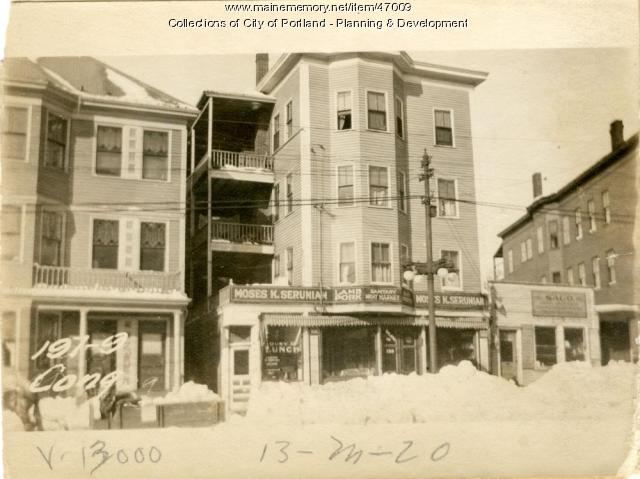 By 1953 this marriage had ended as that was the year Raymond married June Buotet nè Butler. June was a native of Biddeford. Her father, Thomas, worked in one of the mills the city is well known for. This was June’s second marriage as well. She had married a Norman Boutet in Saco in 1942. The Logans sold the home in 1975. It would see 3 different owners before being purchased by the current owners, an LLC, purchased it in 2016. 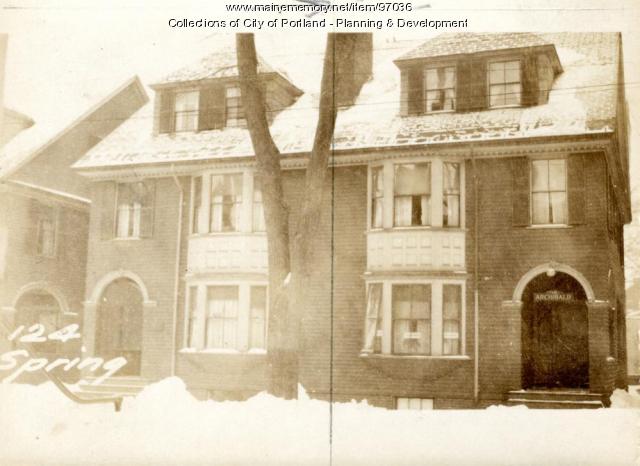 James Burton purchased 124-126 Spring from the Stevens family in 1920. Burton sold the western half of the building, 126 to Bertha Smith very soon after he purchased it. Bertha was a native of New Brunswick, Ca, who had come to Portland with her husband Wylie and daughter Evelyn in 1905. They had a second daughter, Harriet, in 1906. Wylie was a streetcar conductor. They sold the house to Thomas and Edith Oulton in 1928.

Thomas and Edith Oulton were married in British Columbia in 1909. Thomas was 30 years old and a native of Shemoque New Brunswick. He stated he was a sheep rancher in Montana at the time of his marriage. Edith was a native of Portland and was 28 and a ‘spinster’ at the time of the wedding. Her father, Arthur Webber, made and sold corn cakes from a shop on Fore Street in the Mariners Church building. The Oultons lived in our subject until 1946 when they sold it to Isabel Hamlin. There is not much information on Isabel or Isabelle. She was born in Portland in 1891 & died in 1990. She sold the home to the current owner’s family in 1974.

When he died in 1921, James Burton still owned the eastern half, 124, and passed it onto his widow, Gertrude. She in turn passed it to their son James on her death in 1954. James sold it to Mary King in the same year. Mary took a mortgage from the Federal Loan and Building Association when she bought the home. They foreclosed in 1958. Russell and Vera Bubier bought the home out of foreclosure in 1960 & owned it but apparently never resided there until they sold it to a couple named Stevens in 1982. The Stevens sold it to Shalom House, the current owners, in 1988.

Such clear rear views of homes on the peninsula are rare