The Landmarks plaque attributes 94 Gray Street to Edward E. Carlton. I’m not so sure.

The sunburst became de rigueur for Queen Anne’s. This is a pretty good example of the craft

Edward E Carlton/Carleton was married to Gertrude Buzzell Carleton when she purchased the property for 94 Gray Street from Charles Gore in March of 1887. 5 months after the sale of ’94’, Gore sold the lot for 90 Gray to one John Pease. Given the time frame and seeing as the houses are a ‘matched set’ stylistically and physically, I am going to suggest that Charles Gore was actually the builder.

The land for our two subjects, and the house on the corner of Gray and Brackett Streets, was acquired by Mr. Gore from George Milliken. When this happened is a bit of a mystery as Charles Gore had something of a habit of making real estate transactions wherein the deed does not give any reference as to who Gore acquired the property from or when. Also, I cannot find a deed from Milliken to Gore.

Attributions aside, what was created was a pair of modestly sized and handsomely detailed homes in the Queen Anne mode. With a mixture of wall materials, window sizes and placements, and those quirky clipped or ‘pent’ gable ends, they really have a bunch of things going on. This adds a certain dynamic energy to what may have otherwise been pretty simple boxes. 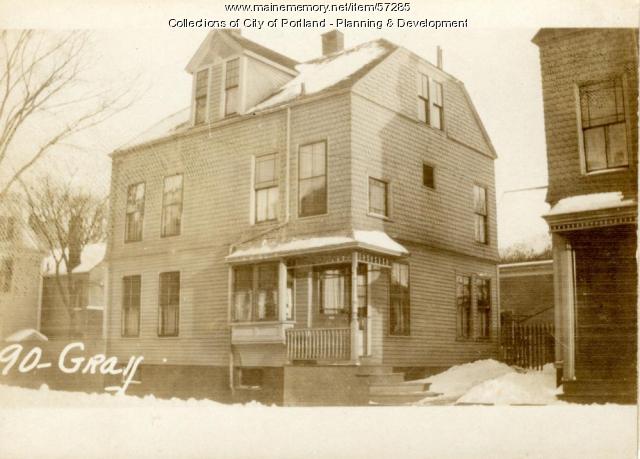 John W Pease was a cabinet-maker with CM & HT Plummer Steam Fitters on Union Street. He and his wife Jennie & their son Jason lived in our subject until it was foreclosed upon by Charles Gore’s estate in 1897. The Pease family shows up in the registry of deeds a couple more times through 1903 but are not on any census record nor can I find a record of their deaths. 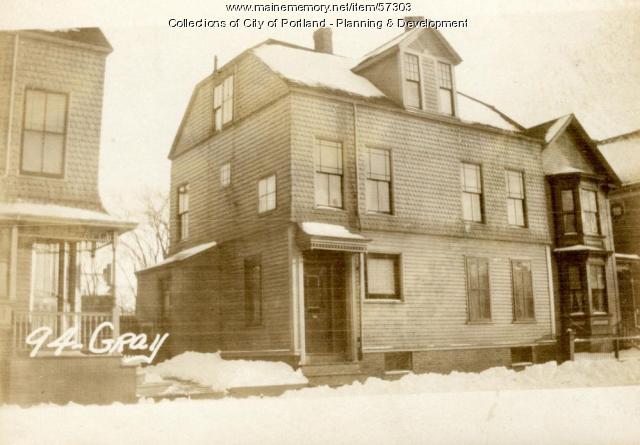 Edward and Gertrude Carleton were married in 1885. It was Edward’s second marriage. His first wife, Minnie had died in 1883 of tuberculosis a few months after the birth of their second child, Harold. They had a daughter, Mabel, who was born in 1880. Edward and Gertrude had a daughter, Bernice, in 1889. He sold window sashes and blinds. It’s possible he supplied said windows etc for our subjects. They certainly are full of a variety of styles. By 1899, he was the general manager and treasurer of the Portland Door, Sash & Blind Company which operated out of a storefront on Fore Street. The Carleton’s sold 94 Gray Street in 1893. Edward died in 1913. I have not found a record of Gertrude’s death.

90 Gray Street is notable for its entry which is inset on an angle. This leads into a simple square bay on the street side. The entry and bay are covered by a simple roof with turned fretwork that flares from the wall some 10-12″. This roof shows signs of some serious water incursion and resulting decay. A glance at the tax photo shows this may have been an ongoing issue. The house’s current somewhat monotone paint scheme tends to reduce the effect of the varied wall finishes and soften the overall impact of the design.

94 Gray is a little different in that the entry is parallel with the street and flush with the wall. It is like its neighbor, covered with a small flared roof with a turned fretwork frieze. The colors are well-chosen are limited in number. The portal is a wonderful affair with stained glass and bull’s-eye blocks. It certainly seems to be original.

90 Gray Street passed through several owners before being sold in 1902 to Lizzie Kimball by Llewellyn M. Leighton. Leighton is not a stranger to the blog, having been the builder of a couple of our previous subjects. He ran a real estate business. His ownership of this property was for all of 5 months. Interestingly, Lizzie’s maiden name was Leighton. It doesn’t appear that they were related.
Lizzie had married an agent for the Maine Central Railroad, Alvin Kimball, in 1863. They had one child, Minnie, in 1870. Alvin died in 1888 and Lizzie would live with Minnie and her husband, Charles Littlefield until her death in 1917. As a final bit of flair, her will, bequeathing all her possessions to Minnie and naming Charles as executor, states her birth name was Charlotte Foss and “Lizzie” was a ‘also known as’.
William and Bertha Emery purchased the home in 1920. William was a first mate for the Eastern Steamship Company. Both William and Bertha had immigrated from Canada in the 1880s. The Emerys had no children but did take in lodgers. In 1927, they sold 90 Gray Street to John Toomey who managed the local Remington Typewriter Company’s office on Exchange Street. Toomey sold to a carpenter John Jacobs and his interior decorator wife Mabel. The Jacobs never lived in the house but rented it until they sold in 1967.

As noted, Gertrude and Edward Carleton sold 94 Gray Street in 1893. The purchaser was a grocery store manager named Will Goodwin. Will and his wife Rachel had 3 children. They lived in our subject for less than 2 years before selling to Dora C Soule in 1895. Dora sold the home to Orrin Pierce on the same day she bought it. Pierce sold it to Mary E Owen some 14 months later in early 1897.

Mary and James Owen were both Maine-born. Mary was the first Maine born chid of Irish immigrants. By the time they purchased 94 Gray Street, they had been married 18 years and had 4 children. They ran a grocery store, now destroyed, at the corner of Brackett and Bradford Streets. About where the basketball court is on the Reiche School grounds. The store seems to have been a real family affair as the 1910 census shows 2 of the 4 children working in the store. 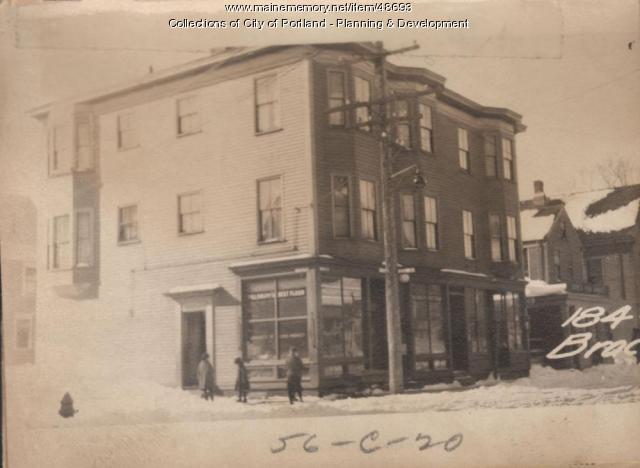 James Owen died in 1911 and Mary followed in 1927. She lived at 94 Gray Street until the end of her life. They were both buried in the Owen family plot in Cavalry Cemetary. Mary’s will passed the house to their daughters Mary and Grace who sold the property in May of 1929. The purchasers were Thomas and Margaret Smith. Thomas was an officer in the Portland Police Force and Margaret raised their 5 girls. They lived on Gray Street through Thomas’ death in 1950 until 1963 when Margaret sold it and decamped to New Gloucester where she died in 1966. She and Thomas were buried in Cavalry Cemetery.