“The more things change, the more they remain the same” so the old adage goes. We often hear or read about builders and developers who take on debt to finance the construction of speculative housing. For Horace Richards, this was as true in 1849 as it is today.

Richards purchased the property from William Widgery Thomas in 1849. The deed has none of the nativist language of his deed to Edward Green for the lot at 154-156 Danforth Street that was filed a year later. The only encumbrances to the deed were a 15′ passage at the rear to be shared with the lot adjoining the rear and a requirement of a minimum 12′ setback from the street line. Richards paid $1330, about $43,500 today, for the lot. Along with the purchase, Richards took a mortgage with Thomas for $2300. We can surmise the extra $1000 was for at least part of the construction costs.

What Horace built was fascinating. It’s quite tall for its width. A feeling exacerbated by the high foundation on which it sets. As noted, the style is Greek revival overall with some quirky bits thrown in. The main facade is very symmetrical. Heavy, square, pilasters with simplified capitals carry a flat frieze with slightly projecting architrave. The windows are tall and narrow, very much in style, and carry simplified versions of the pilaster/architrave detail. The 6 over 6 sashes may be original. They are evident in the 1924 tax photo and are period correct. Missing from the modern building, but visible in the 1924 tax photo, is a parapet that stood on the roof at the eave line. I’m sure that this decorative device caused no end of problems and was not replaced when it had decayed or the building was given a new roof. 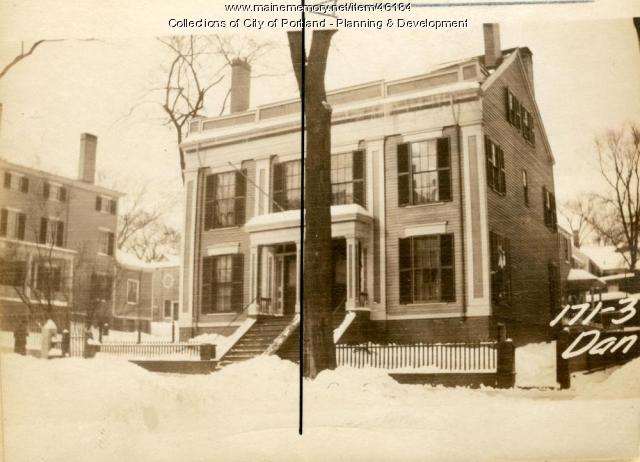 Horace Richards seems to have run into some difficulty in completing the construction of 171-175 Danforth Street. We know this because in 1850, 6 months after purchasing the property and taking a mortgage, he took another mortgage from William W Thomas for $800 more. In this loan were the following stipulations:

The reference to insurance may have been due to a gale of December 8, 9 & 10 1849 having resulted in the collapse of part of the building as noted in Beckett’s City Directory of 1850-51. In January of 1851, Horace sold the property and the two mortgages to a shipbuilder from Westbrook named Thomas Murray for $6000. Thomas Murray died in 1853. That same year saw the sale of the house and mortgages to Jonas Perley who was a successful merchant.

The projecting bay on the southwest side of the house presents some odd items. In and of itself, a projecting bay is not that odd. This one has several features that single it out. The first is the missing section on the first floor. The rear third has been eliminated for some reason. All of the trim is there down to the capitals of the pilasters. The 1924 tax photo does not show this side in detail but the tax photo for 71-79 Brackett Street, when fully zoomed, seems to show it was not there then as well.

Then there are the windows on the second floor. The arched tops with molded and key stoned trim are very Classical in nature and seem to have been lifted from a plan book and applied directly to the wall surface. The clarity of the window trim, dentil moldings and overall quality of the trim on this bay, when compared with the trim of the main facade, would suggest it was executed by a different, more skilled, craftsman.

Jonas Perley wasted no time in recouping some of his investment. Within a few weeks, he has sold 171 Danforth Street to the architect Charles A Alexander. Alexander retained ownership until 1863 although he had built a residence farther out Danforth in 1859. The Perley’s remained in our subject until 1858 when it was sold to Daniel Hood. They moved to a house, now destroyed, on the Western Promenade before decamping with their 8 children to the West Coast in the early 1870s. Fanny Perley died in 1885 and Jonas in 1892. They were both buried in the Perley family plot in the Gray Village Cemetery.

The entries are simple with paneled doors, sidelights, and transoms. The right-hand light on 175 seems to be a replacement. The columns of the porch are reproduced in engaged versions flanking the entries. The current steps are most certainly replacements. When zoomed in, the 1924 tax photo seems to show masonry steps with an iron railing.

Daniel Hood sold 171 Danforth 5 months after purchasing it. The buyer was Harriet Haskell. Harriet was born in Portland in 1824. When she married Sewall Haskell is not certain but it was probably around 1840 or 41 as their daughter Bella was born in 1841. She was their only child. Sewall was a paymaster for the Atlantic Railroad when they bought the home but seems to have gone into business as a bookkeeper as he listed as doing so from the house in the 1873 city directory.

The Haskells would live at 171 until May of 1873 when they sold it to William Widgery Thomas. The Thomas family would retain ownership through 1924 as William’s son, Elias, was the owner of record at that time.

When Charles Alexander sold his 175 Danforth in 1863, the purchaser was, you guessed it, William Widgery Thomas’s son, Elias. The Thomas family would own the property until 1898 when it was sold to Edward C Jordan. Edward Jordan was a civil engineer and surveyor. He ran E.C. Jordan for many decades. The company was later combined with several other firms to become Owen Haskell Land Surveyors. He had married William Widgery’s daughter Eliza in 1873. Eliza died in 1876 and Edward remarried in 1882 to Marcia Bradbury. She died in 1923 and Edward in 1935 at the age of 89. He lived in our subject until his death. 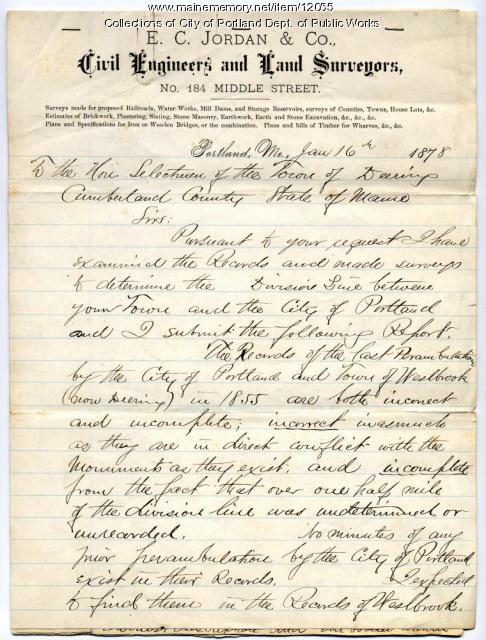 E.C. Jordan’s letter regarding the boundary of Deering, 1878 Mainememory.net

The current tax information shows the entire building under one owner. It is listed as a 5 to 10 family apartment building. Condition, it goes without saying, is poor.