Built ca 1867 by the heirs of Dudley Cammett. Designed by George B Pelham.

A brick Second Empire in the India Street Historic District.

The building and maintaining of sailing ships required many specialist craftsmen. One of particular importance was that of a block maker. For the Cammett family, it was a way of life. Dudley Cammett was a native of Portland and a veteran of the War of 1812. His father, uncle, and grandfather were all coopers, pump makers, and block makers. Dudley took up the trade as well.

96-100 India Street was built by Dudley’s daughter Harriet in 1868 to replace a previous structure destroyed in the fire of 1866. It had been Dudley and Betsey Cammett’s home up until his death in 1863.

The Second Empire Style was very much en vogue in the late 1860s and was much used after the Great Fire. Characterized by looming towers and Mansard roofs, it was a very exuberant style. Across the street from our subject is a firehouse built in 1867, designed by George Burnham, that really exemplifies the style.

96-100 India Street was designed by another George. In this case, it was George B. Pelham. Pelham was English-born and educated. He had moved to Canada in 1859 and was involved in constructing the new governmental buildings in Ottawa. As that project was winding down, Portland’s Great Fire of 1866, the largest urban fire in US history at the time, occurred causing the loss of over a thousand buildings on the peninsula. The need to replace these structures created a shortage of engineers and architects. Pelham was one of many architects who jumped at the opportunity to fill the need.

Pelham arrived in Portland in early 1868. In April of that year, he and a local engineer, William Bonnell, advertised their combined services working out of an office in the newly rebuilt Canal Bank Building. His first and most significant work was St Paul’s Church and rectory just around the corner from our subject on Congress and Locust Streets. It was, and still is, a handsome example of English Country Gothic church architecture. Pelham designed 2 other churches, since destroyed, and a double house directly behind St Paul’s, heavily modified, before moving onto New York City, where he worked on Central Park, in 1871.

For Harriet Weatherbee and her brother-in-law James Lunt, Pelham provided a block of three, now two, rental units in a reserved interpretation of the Second Empire Style. No towers or extravagant details. Symmetry is the controlling device and Pelham used it to great effect.

The first-floor windows are of note. Palladian windows that are a bit too tall for their width are set on and surrounded by frames and ornate hoods of brick. The entries are recessed behind an arch. They are covered by bracketed roofs. The doors are modern and are side-lit. The ceilings of the recesses are painted a pleasant blue and have hanging lamps in a period style.

As the property was, and still is, rental, tracing residents is more challenging. Luckily, when the India Street Historic District was established, thorough research was done on all contributing structures and the resulting report helps to guide us in some notable tenants. 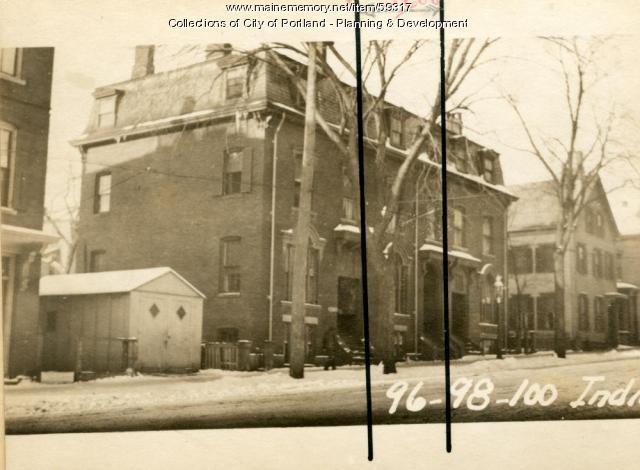 Phebe E Partridge. Phebe was 63 years old when the census of 1880 found her running a boarding house out of #68 with her 22-year-old daughter, Susan. She had 4 borders.

96-100 India Street from the 1886 Sanborn Insurance map. Library of Congress

Thalia H Perry. Thalia was widowed and 52 years old in 1940. She was black and from Ohio or North Carolina depending on what census you’re looking at. She had been in Portland since 1920 as she was reported on that year’s census as living with the Swett family at the foot of Atlantic Street as a cook. In 1926 she was working as a maid and living in an apartment building on Fore Street. She was working as a maid in 1940 and renting rooms to Zacharia and Amogine (sic) Austin. They were black. Zacharia was from Connecticut and Amogine from Jamaica. He was a  houseman for a hotel and she was a maid. They had 2 children.

In 1898, Paul and Else Jensen moved into 98 India Street. Paul was a blacksmith for the Grand Trunk Railroad whose terminus and station were at the foot of India Street. Paul was Danish and Else was Swedish. They had emigrated to the US in 1889. They had a daughter Mary who came to the US with them. They had 8 borders from 28 to 56 years old. 5 were Danish, 2 German, and 1 Irish. I think Paul may have been the brother of Neils Jensen who also was Danish and came to the US in 1889. Neils was 2 years younger than Paul, worked as a laborer for the Grand Trunk, and lived on Ocean Street in 1900. His wife’s name was also Else but she was Danish. 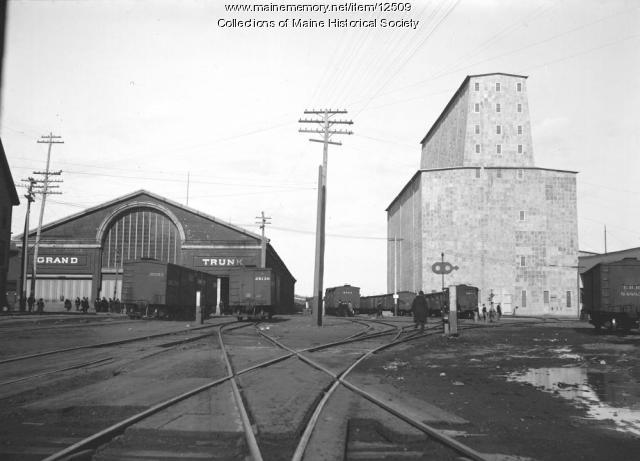 Fred and Hattie Merrill had 2 girls, Grace, and Winnie when they lived at 100 India in 1900. Fred was a jeweler and Hattie, no surprise here, took on lodgers to make ends meet. They had 6 in 1900 along with an ‘uncle’ Cameron. By 1906, the Merrils had moved to Cumberland Avenue.

Harriet Cammett, the owner of the property when our subject was built, married a merchant from Boston named Levi Wetherbee in November of 1864. In June of the next year, Levi died of Bright’s disease. Harriet had purchased the right end unit of the then fairly new row at the bottom of State Street after her father’s death. Harriet married Horatio N Jose in 1891. He died in 1892. Harriet lived the rest of her life on State Street. She died in 1912.

The building is currently listed as a 5 to 10 family and is in very good shape. It is in the India Street District and, as such, falls under the city’s historic preservation guidelines.