A Stick Style home in the Deering Street Historic District.

The term apothecary is rarely used in America today. ‘A person who compounds medications’ is, more often than not, called a pharmacist. For William Whipple, Harrison’s uncle, and Harrison’s, it had been the family business.

Harrison was born to Lucius and Francis Whipple of Windham in 1841. He served one stint during the Civil War for the Union Army as a private. He mustered on September of 1862 and received an honorable discharge in July of the following year. According to his enlistment record he was 5’6″ tall, had a light complexion, dark hair and blue eyes. He married Apphia Judd in 1875.

The following year, Apphia’s mother Jane purchased the land for our subject from Henry Payson. The lot was adjacent to that of William’s where he had built his Italianate home in 1869. Why she would purchase the property is a mystery as I do not see where she ever lived there and she transferred it to Harrison and Apphia later that year.

The house sits on a high bank, as do most on this side on the street. It’s in a muted form of the Stick Style. The style was noted for applied decoration that mimicked the underlying structure. This is, of course, missing from our subject thus reducing the overall effect. It sports projecting bays on both sides and a broad veranda covering the entire first floor front facade. Surmounting the veranda roof is another bay which was once capped with a small porch for the double windowed dormer. This roof porch is now gone.

A final noteworthy detail is the patterned frieze. It’s a common element of Stick Style homes. Very hard to discern unless the sun, shadows and trees play along. On my visit they did not play along so the picture above is from a certain online source that shall remain nameless. The Portland Historic Resources Inventory puts Simon Libby as the builder. We saw Libby’s work in the Venetian Gothic double house he built for John Munger 10 years previously and this latter house shows he could work in a variety of eclectic styles. 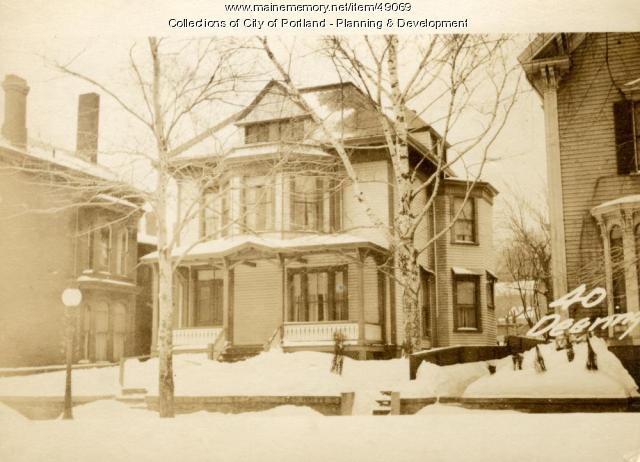 Harrison and William Whipple changed vocations in the later 19th Century. Harrison moved into real estate and had an office in the building to the left of the First Parish Church on Congress Street. In 1889, WIlliam had taken over management of a store in that same building called the Boston Bargain Store. The buillding was renovated into the current “Metropolitan” in 1926-27. A table in the Maine Attorney General’s annual report for 1893-4 says Harrison and William were each fined $59.38 for the ‘single sale of prohibited alcohol’.

Harrison and Apphia had 2 daughters. Elizabeth was born in 1879 and Jeannette in 1885. Elizabeth married Henri Micolean in 1907. Micolean ran the Portland School of Languages at 633 Congress Street. Jeannette appears to have never married and worked in her father’s office as his secretary or stenographer as they were commonly called in those days.

Harrison Tyler Whipple died of chronic interstitial nephritis on November 11 of 1918. He was buried in Evergreen Cemetery. His real estate company was taken over by his nephew Clayton. Jeanette continued to work for Clayton.

Apphia sold 40 Deering Street to Gertrude Mahar in 1920. At that time, she moved in with Jeanette who had purchased the house at 212 Vaughan Street the previous year. Apphia lived there until her death in 1936.

The house is currently listed as a single family residence and is in excellent condition. It is in the Deering Street Historic District and falls under the city’s historic preservation regulations.