A brick Italianate on the southeast slope of Munjoy Hill

They were the Children of Erin. Sarah and William Connor were born in 1839 in Belfast Ireland. They married in Belfast in December of 1865 and emigrated the following year. Sarah’s death certificate says they arrived first in Montreal. Two of their children, Annie and Louise, were born in Canada. The 1900 census states they had 5 children with only the two girls surviving. There is no record of the other 3. The first appearance in Portland for the Connor family is 1870 when the census found them living at the foot of Munjoy Hill on Fore Street.

What Sarah and William built in 1881/2 is the classic ‘East Ender’ seen in countless iterations across the city. A gabled end faces the street. It’s divided into two unequal bays. The smaller bay contains the entrance and, usually, the stairwell for all the stories of the house. The larger bay carries the living area and usually has a projecting bay window on the 1st and 2nd floors. Our subject has all these characteristics but is a bit larger and, most importantly, made of brick. The vast majority of ‘East Enders’ were built of wood. 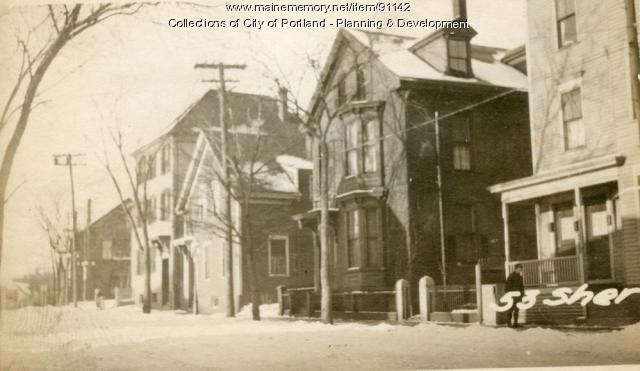 William Connor, or O’Connor as it sometimes appears, always gave his profession as ‘laborer’ or ‘day laborer’. When the family was living on Fore Street we can surmise that he may have found most of his work at the Portland Company right across the street. I think it’s very possible that William at some point found work with the Cunningham Brothers, one of the city’s premier masonry firms of the period. We have seen their work, both speculated and confirmed, in several posts on the blog. Noted for their stylistic handling of details and high level of craftsmanship, several of their touches are found on our subject.

As noted, the masonry on our subject displays a level of craftsmanship and style that is out of character for the neighborhood. The window openings are clean cut with simple wooden sills. Topping the window openings of the front façade are 2-stage compressed arch crowns that rest on corbeled brackets with a drapery motif. The windows on the remaining walls have simple compressed archtops. The eaves are bracketed and have a fine dentil molding at the transition line. The cornice projects slightly and is paneled. Another sign of craftsmanship not easily discerned from the photos is the use of a red-tinted mortar on the joints. This simple detail minimizes the joints and helps visually unify the body of the building into a singular mass.

Another feature that differentiates 53 Sheridan Street from so many of the East Enders in Portland is its depth. At 45 feet, it’s about 50% deeper than the norm. Also, the dormers on the east roof indicate a finished 3rd floor. As the Connor’s only had 2 children, the extra space would seem to be unnecessary but, as was so often the case, the reason for the space was so the family could take in borders. In 1900, the Stinchfield family, William, Lilian & their 4 children resided with the Connors. William Stinchfield was an engineer for the Grand Trunk Railroad. One son, Samuel, was a fireman for the Grand Trunk and the other, Walter, was a ‘soldier’. These two sons were not Lilian’s. She noted having 2 children and they were Clara, aged 14, and Anna, aged 13. The Stinchfield’s moved out of Portland after 1900 as they do not appear in the 1906 city directory.

53 Sheridan Street on the 1886 Sanborn Insurance Map. Library of Congress

Sarah and William, as we’ve seen, had two daughters when they arrived in Portland. Annie, the eldest, never married and lived with her parents through their deaths. Louisa married Franklin Sawyer, a railroad conductor, in 1893. Franklin died in 1907. Previous to that, William died in 1902 of renal disease.

Louisa moved to Boston after Frank’s death. She died in 1960 and was buried by Frank in the Connor family plot at Evergreen Cemetery. Sarah Connor & Annie Connor continued to take borders after the death of William. The 1910 city directory lists Harold and Evelyn Cole & Jerome and Mary McDonald as tenants. Harold Cole was a paymaster for the Maine Central Railroad. Jerome McDonald was a clerk at the Globe Laundry on Temple Street.

The entry is elegant in its simplicity. From the simple double doors to the sunburst above and delicate dentil detail created with the brickwork, it’s all very understated. The roof or hood above the door is supported by chunky but elegant brackets with built-up moldings above. The ceiling of the roof is paneled and detailed with well-scaled moldings.

Sarah Connor died from the effects of a stroke in August of 1918. Annie and Louisa sold the property to Joseph and Elizabeth Reardon the following year. Joseph and Elizabeth were brother and sister who, along with their sister Catherine, grew up on Adams Street where their mother, Catherine, ran a grocery. Catherine the elder was an Irish immigrant and may have known William and Sarah from their shared heritage. The family-owned an apartment building on nearby Monument Street along with a stable on Carey Lane. Both the family store on Adams Street and all of Carey Lane were lost to the Munjoy South housing development. The Reardon family owned 53 Sheridan Street until 1966.

53 Sheridan Street is currently listed as a 2 family home. It is in good condition.