A brick Italianate on the corner of Brackett and Walker Streets in the West End Historic District.

Maybe they just didn’t like the city. Joseph and Mary Walker were both born and raised in Bridgton Maine. Joseph, born in 1826 to a merchant, was a lumberman in his native town in 1850. Mary was born 10 months earlier to a farmer who had died by 1850 as her mother, also named Mary, was living with the couple at that time. When the Portland city directory for 1858 was published, Joseph and both Mary’s were living on Winter Street and Joseph had founded J.J. Walker Wholesale Lumber and Coal with William H Walker. The 1860 Census found Joseph, Mary, and her mother, in Portland in Ward 5 which contained Winter Street. Our subject is in Ward 7. It would seem on the surface that the two Walker’s would be related and I suspect they may have been but William was 5 years younger and from Massachusetts. So, if they were related, it was somewhat distant.

235 Brackett Street is made up of a wide block with a 3 story gable facing Brackett Street. It is one bay deep and intersects with a narrower block of the same height but 3 bays wide that parallels Bracket and presents a gabled end to Walker Street and its own driveway. It’s built of brick with a nicely tinted and tooled mortar adding to the quality of the masonry. Details are many and, as we shall see below, tell a tale of the various changes the house has undergone in its 150+ year life. There is a 2 story service wing on the rear that, mostly, carries the detailing of the main block. 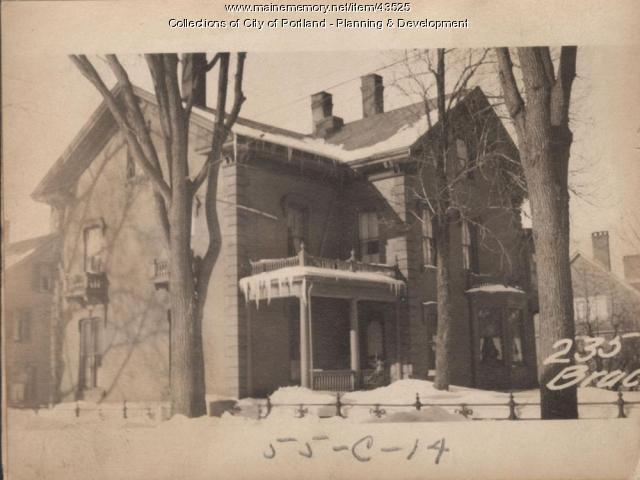 By 1870, Joseph and the 2 Mary’s were back in Bridgton. Why and this happened is something of a mystery. When it happened is after September of 1866 as a court judgment in his favor places him in Portland at that time. The business continued to operate for a couple decades with William at the helm. Joseph died of liver disease in December of 1875. Mary in May of 1897 of the effects of a stroke.

Joseph Walker’s gravestone in Evergreen Cemetery has a wonderful tent on it symbolizing his membership in the Odd Fellows.

The Walkers had sold our subject in 1864 when, according to the deed, it contained a “house newly built”. The buyer at that time was Nathan Woodbury. Nathan was a grocer who operated a storefront on Commercial Street with Willard Harris. Nathan died of tuberculosis in August of 1866. His widow Anne sold the house to a dry goods merchant named Albion Little in March of 1867. It was during Little’s 18-year ownership that a simple drawing of our subject was made for a local publication called “Elwell’s Portland and Vicinity”. This drawing, seen below, gives a glimpse of the house as it once was some 50 years prior to the Portland Tax roll photos of 1924. It also gives a chance to ‘remove’ the later changes.

Perhaps the most obvious change is the ‘widow’s walk’ and its balustrade are no longer on the roof. Lost no doubt to decay and the cost of repairs. It’s a shame as it seems to have been of an impressive size and it helped to give emphasis to the horizontal lines of the composition. Also lost is the balustrade above the porch although this survived until 1924 at least and looks to have been quite the stylish item. It doesn’t match the version seen in the drawing but that could be the artist’s license. Some of the other differences may be artistic license as well but require more investigation.

The Brackett Street façade shows the ghosts of the balconies that embellished the second-floor windows. The tax photo of 1924 shows separate items as well. Here I think we can solidly state that the single balcony of the drawing is artistic license.

Albion Little was born on a farm in Whitefield, Maine in 1836. His early years are unclear but he first shows up in Portland in the 1860 census. He was boarding with the family of a dry goods merchant named Lane & working as a clerk at the time. Possibly, given his later career, in Lane’s establishment. In December of the following year, he married Sarah E Hart, the 21-year-old daughter of a Portland wool dealer. They would have 7 children, 2 dying in infancy, over the next 20 years.

The gable end of the Walker Street façade is another place where changes appear to have taken place. The drawing from the 1870s shows a very symmetrical arrangement with 2 windows flanking a central bay on the first floor and 3 windows on the floor above. All very neat and tidy and what we would expect for the style and period. And nothing at all like what we see today. The bay has grown and migrated to the right corner where it replaced the window. On the second floor, the right-hand window is gone. For no obvious reason. It may have been when the home was split into apartments. I don’t think that’s likely as the work done to fill in the window opening, although not fabulous, was fairly well done and they at least matched the mortar. I suspect it was done at the same time the other changes were performed. I just have no idea why. These changes have removed any symmetry and most of the balance from the façade.

The driveway facade also shows some of the elements of the Walker Street side. An interesting note is the hoods over the first-floor windows on this side are much simpler than the other facades but the second-floor window hoods are just as detailed as the others.

The Little’s sold 235 Brackett Street in 1885 and decamped to a Mansard, now demolished, on the Western Promenade. The initial buyer was Abbie Barker but she sold it to George Milliken, a wholesale grocer, 6 weeks later. George and his wife Henrietta had 3 children, Frank, Georgietta & Alice, who were all in their teens when the family moved into our subject. George and his brothers were founders of Milliken Tomlinson Wholesale Grocers. The firm was a long-time tenant of the building on the corner of Center and Commercial Streets where a ghost of their sign can still be seen. George Milliken died in 1899 of ‘exhaustion’ at the age of 59. Frank inherited the property at that time.

Some of the most intriguing differences appear on the service wing. The drawing shows a stack of windows with those on the first and second floor having the same hoods as the main house and the basement window having simple, square, lintel. The current arrangement has the same lintel and first-floor window but the second story now sports a rather extravagant bay the projects from the corner.

There are other issues with this façade as well. The current first-floor windows on the wing do not line up vertically with the windows of the main house. The drawing would seem to show them at the same level. The 2nd story window is gone and there does not seem to be a ‘shadow’ in the masonry marking its previous location. The drawing also shows the corners of the wing having quoins to match the rest of the house. They are not visible on any side of the wing. Artistic license?

Then there is the intersection of the wing and the main house. On the driveway side, opposite Walker Street, the wing connects under the eave of the cross-gable, is a good 2 feet from the windows of the main block, and its architrave and dentil molding are integrated into the similar moldings of the main block. We see none of this on the Walker Street side. The wall of the wing is right up against the sides of the windows. This wall does not align with the cross gable. More glaring is the architrave and dentil moldings of the main block run behind the roofline of the wing. This suggests the wall was added later. Could it be that the wing was enlarged by ‘moving’ the Walker Street wall out and adding the bay window? I think it’s very possible.

Frank Milliken sold 235 Bracket Street to his uncle Seth in 1913. Seth Milliken lived and died, in Manhattan so we can surmise it was for financial reasons. Seth died in 1920. His children, Seth Jr, Gerrish & Margaret, inherited the property. They retained ownership, though they all lived in NYC, until 1941. By 1926 the house was being run as a boarding house operated by a widow and former RN named Winifred Ovidiu. Her husband, Melamed, was a Hungarian emigre and assistant surgeon at the Soldier’s Hospital in Augusta who had died in 1921. How long Winifred operated the boarding house is unclear. She died in 1958 and was buried in Augusta.

235 Brackett Street is currently listed as a 5 to 10 family apartment building. The owner is a local attorney. Condition is poor.