A wooden Second Empire in the Longfellow Highlands neighborhood.

They were escaping the city. Abby and John T Small lived in a 3 family ‘triple decker’ that John had built on Spruce Street, demolished for the building of the Reiche School, when Abby purchased land in Longfellow Highlands from Samuel Norcross who was a local builder. The purchase date was February 12 of 1877 and it included 2 lots which now cover 104 and 110 Prospect Street. Given that the houses on these lots are identical to each other, we can surmise that the Small’s had them both built. They were probably mostly completed in 1879 when Abby took a mortgage on the property which cited “buildings there on”. The mortgage stated Abby was a resident of Portland. As Longfellow Highlands was in Deering at that time, it’s unlikely the Small family was living here yet but it was not very long after that they moved as the 1880 census has them in our subject.

What the Smalls had built was a simple, but nicely detailed, Second Empire home in the urban mode. It’s one bay wide, two stories tall, and has a cross gable about two-thirds down its length. The trimmings are fairly simple but well executed. The finely scaled dentil molding capping the entablatures is a nice feature that emphasizes the horizontal nature of the composition. The building’s corners are set with plain pilasters that finish in some very interesting capitals that are made up of square brackets with cabochons on their faces, volutes in their interceese, and X motifs on their ends. The Mansard roof is very steep, a feature seen on many small Second Empire houses of the period in Portland. Kudos to the current owners and roofers for reproducing the patterns of the original slate roof in modern asphalt shingles.

By the time they purchased the property for our subject, John Small had changed occupations. On the 1870 census, John listed ‘wholesale grocer’ as his work. The city directory for 1873 confirms this and says he was working out of an office on the corner of Fore and Market Streets. He had retired by 1900. Abbie died of heart disease in 1906. John lived at 104 Prospect Street until 1915 when he died of pneumonia. The surviving children inherited the property after John’s death and would retain ownership until 1919.

The porch is a very inviting space with its paneled ceiling, curved brackets, and jig-saw patterned balustrade. It faces due east and would have had a great view of the sunrise and some of the city. Sitting nearly at the crest of the hill, it would have had great breezes as well. A very nice thing to have when the city is sweltering in the summer heat.

When Louise Small and Henrietta Huston sold 104 Prospect Street in 1919, the buyers were Helen and Vernon Everett. Vernon and Helen had married in 1914. Vernon was a salesman for Talbot, Brooks, and Ayer, a wholesale paint and hardware distributor. Helen had worked as a stenographer or secretary, for the Portland Electric Light Company until their marriage. According to his draft card, Vernon was of ‘medium’ height & had brown hair and eyes. Vernon and Helen had a daughter, Phyllis, in 1916. They had two more children after moving into our subject, Vernon Jr in 1924 and Viola in 1926. 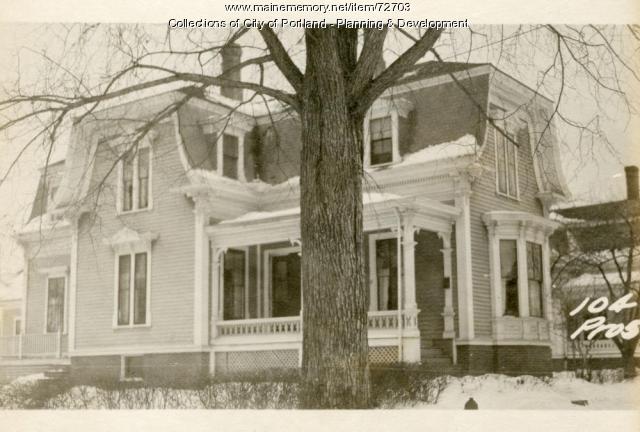 The Everett’s would remain at 104 Prospect Street until 1942 when they sold and moved to the Falmouth Road in Falmouth. Helen died in 1964 and Vernon in 1968. The purchasers in 1942 were Arthur and Drusilla Nesbit. The Nesbit’s had a son, Loring, and a daughter, Drusilla, when they purchased the house. There is little info about Arthur. He died in 1957. Drusilla remarried in November of the same year. Her second husband was Jerome Pedro. The Pedro’s lived in our subject through the death of Jerome in 1981 and Drusilla in 1995. 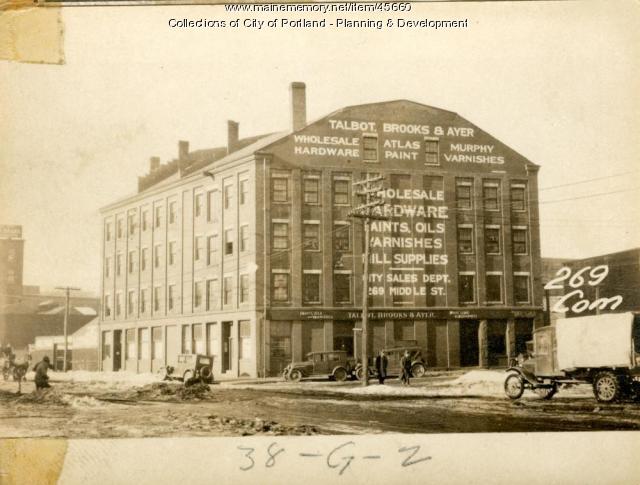 The house is currently listed as a single-family home. Condition is excellent. The current owners are architects and have a consultancy business. They purchased the home in 2013.