“The Song Remains the Same”. So the old adage goes. In our case, the song is ‘Only Natives Allowed’ and the singer, as we have seen before, was William Widgery Thomas. Thomas didn’t always put such onerous restrictions on deeds but when he did, it was very clear, “Premises shall not be sold to any but native-born American citizens. If they are, the property shall revert to said Thomas, his heirs, and assignees.” As we have seen before, these restrictions were not carried into any future deeds.

The Greater Portland Landmarks plaque on our subject says it’s the Levi S Brown house ca: 1858. I’m not one to question Landmarks on the veracity of these plaques on a regular basis but on this one, I think it’s incorrect. I base this on the pair of deeds, and connected mortgages, William Widgery Thomas executed on June 25th of 1858. They are, Book 287 – Page 510 to Levi S Brown and Book 287 – Page 511 to Galen J Deguio.
These deeds both contain the language quoted above. For the question of the builder, I note the following language for Levi Brown “commencing where a line through the center partition wall of a block of buildings now standing would strike” and the following for Galen Deguio “said line running through center wall of brick partition wall dividing brick houses standing on said lot” The metes and bounds for these two deeds describe the adjoining buildings perfectly with Brown purchasing #12 & Deguio #14. From this, I am of the belief that William W Thomas built our subjects as a speculative investment.

The building is simple with decent if small, proportions. Details are few and mostly limited to the door and window openings. The general arrangement of the front façade is interesting. The rhythm of the bays receding from then advancing back to the outer line of the wall combined with the order of the windows and doors emphasize the interior layout and tell us this is a double house. The windows are tall and mostly devoid of trim but for the well-scaled granite lintels and sills. 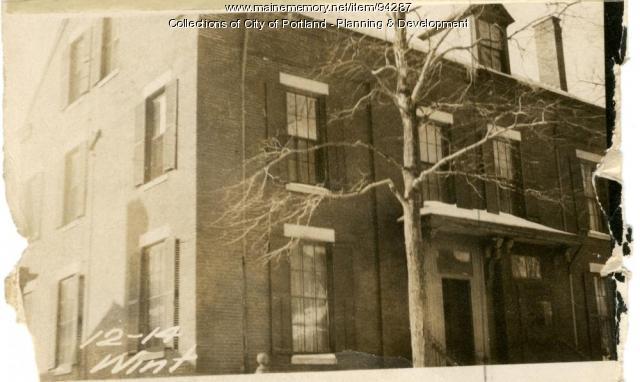 The entries are equally restrained but do show variations in details. # 12 shows more of the original Greek Revival with its single door, very thin moldings and rigidly geometric arrangement whereas # 14 is more Victorian with the double doors, sidelights removed, and more emphatic moldings of the casements.

The side walls are even simpler than the front façade. The windows on the first are full height as with the front but the second-floor windows are shorter than their counterparts of the front façade. But for window openings and very simple returns under the eaves, there is nothing that breaks the surface of the wall. There is a shallow two-story brick extension centered on the back of the building from which separate wood frame ells extend. 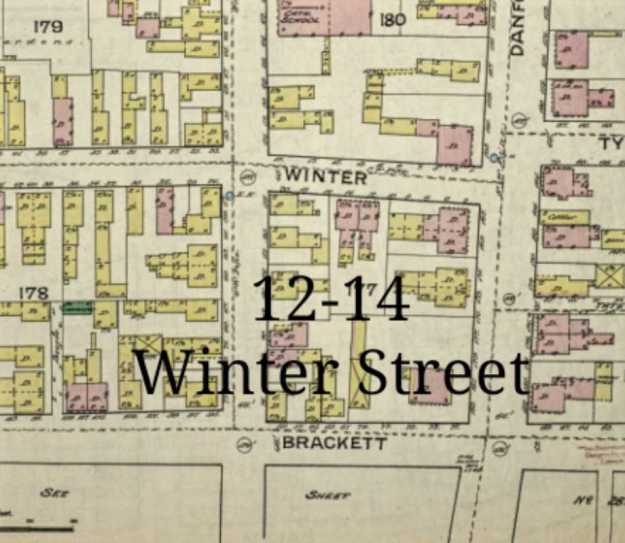 Levi Brown sold and installed gas fixtures. Galen Deguio was a third-generation shipbuilder. It was in his family’s shipyard that the Great Fire of 1866 is thought to have begun. They both followed similar paths in that they lived in our subject for less than a decade before moving to the Woodfords neighborhood. Galen sold #14 to a flour merchant named Weston Milliken in 1864 & Levi sold #12 to a long-time Portland jeweler & watchmaker named Oliver Gerrish in 1867.

One can only imagine what Oliver and Sarah Gerrish were feeling when they moved into 12, then 2, Winter Street in June of 1867. A mere 11 months prior, the Great Fire had swept the city leaving a large swath of the city in ashes. Among those ashes were the Gerrish’s lively hood and home. Oliver had run his business on Exchange Street for over 3 decades by then and they had lived on Locust Street for nearly as long. This loss came after losing a son in the latter part of the Civil War. Oliver’s partner, watchmaker Nathaniel Pearson, and a 22-year-old watchmaker named Charles Lamson moved into #2/12 with Oliver & Sarah and their daughter Sarah along with an Irish servant named Mary McDunno. So much for ‘native born’ residents.

Oliver’s family and friends looked out for him and Sarah in their later years. A mortgage Oliver had taken to purchase the home was paid off a few years later by the couple’s two surviving sons, Charles and Frederick, and several other local merchants. Sarah Gerrish died of ‘old age’ in October of 1888. She was 88 years old. Oliver died of ‘old age’ as well 6 weeks later at the age of 92. Their daughter, Sarah C Gerrish, remained in the house until 1904 when she sold it to an attorney named John Fagan and his wife Ellen.

Weston Milliken did not own 14 Winter Street for very long. He had purchased it from Galen Deguio in July of 1864 and sold it in January of 1866. The purchaser was James Bain. Bain was born in Montrose Scotland in 1831. He arrived in Philadelphia in January of 1845 and filed papers for naturalization in Portland on July 24, 1854. He married Harriet Rounds, the 16-year-old daughter of a Gorham farmer, on July 19, 1858. Harriet was his second wife, his first, and the mother of his 2-year-old daughter Mary was also named Mary and she had died in the same year. By the time of this marriage, James was a shipmaster. The couple took residence on Vine Street which once ran between Middle and Fore Streets in the area now occupied by the Customs House Parking Garage. They had 2 children, Charles and James. 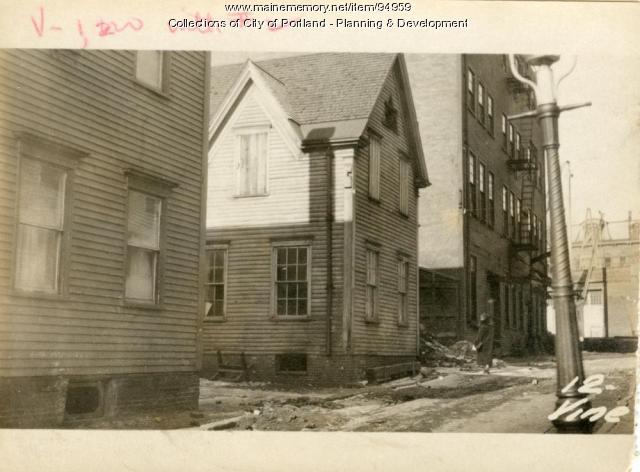 18 Vine Street in 1924. Although this is most likely not where the Bains lived, it is a good period example of the houses on the street. Mainememory.net

James Bain died in November of 1899. In his 45 years in Portland, he accomplished much. He had been involved in development on Peaks Island in the 1880s and 90s, had built several houses on Spring Street, and purchased other properties in the neighborhood, all of which he left to his family along with our subject.

By 1910, Harriet had moved to Spring Street and 14 Winter Street was being rented to Henry Cobb, a pressman for a paper goods manufacturer on Spring Street, his wife Agnes & 2 children, and a letter carrier named Frederick McCrink and his wife Catherine. 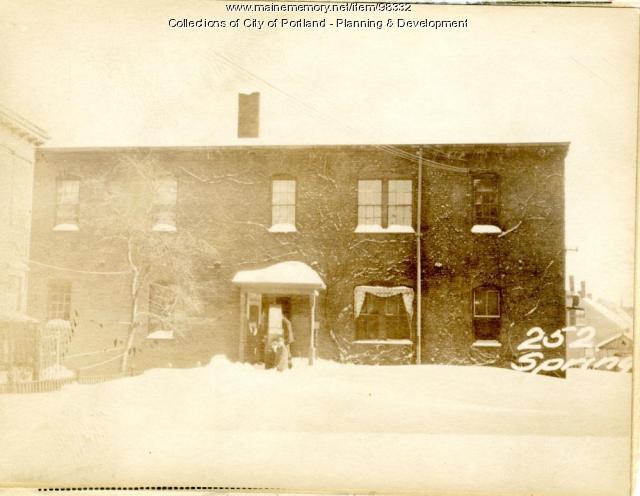 252 Spring Street, the home, in 1910, of the L H Nelson Company. They were a paper goods supplier and employed Henry Cobb. Mainememory.net

The McCrinks stayed at 14 Winter Street until 1923 when they purchased property on Hartley Street in the Deering neighborhood. They had two daughters, Thelma and Louise. No, I’m not making that up. The Cobbs moved to Massachusetts before settling in California in the late ’20s. Harriet Bain died in May of 1917.

The 1926 city directory gives us a final glimpse at the tenants of 14 Winter Street ahead of its sale to Thomas Fagan in 1928. They were Alexander and Sarah Loveitt. Alexander was a carpenter in the machine shop at the Portland Company. The Loveitts decamped to Cape Elizabeth where they were long-time residents above the Cape Cottage Post Office, recently removed. Sarah died in 1944 and Alexander in 1949. 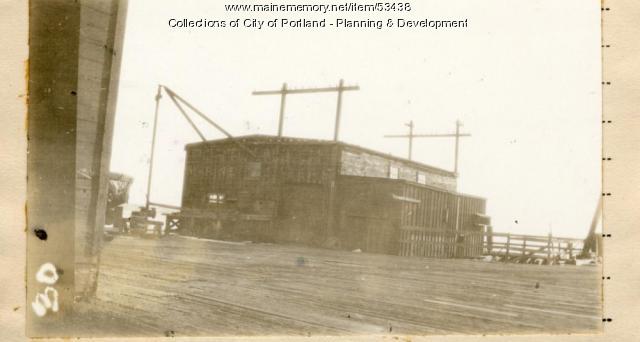 The second residents were Frank and Maude Thomas. Frank worked sewing mattresses for Corey’s Furniture on Free Street. By 1930, they were living in the Home for Aged Men and Women on Danforth Street, now part of the 75 State Street Complex. 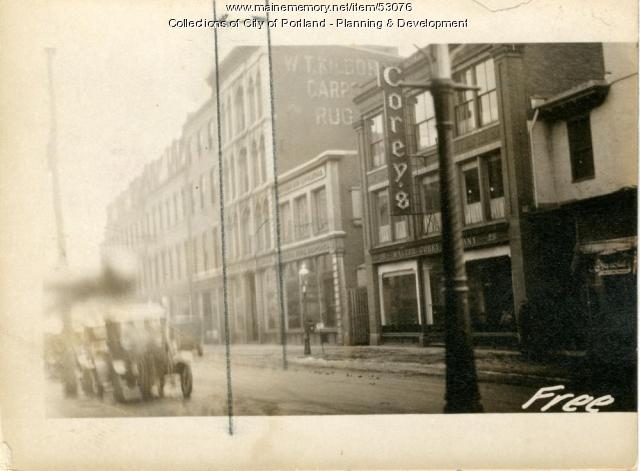 Attentive readers will note the shared surnames for the purchasers of 12 and 14 Winter Street. John and Ellen Fagan purchased 12 in 1904 and Thomas Fagan purchased 14 in 1928. Thomas was John & Ellen’s son. John and Ellen had married in 1898. Thomas was born in 1903. John was an attorney who kept an office on Exchange Street. Ellen died of intestinal cancer in 1915 at 49 years old. John remained at 12 Winter until his death in 1930. Thomas inherited the property at that time. 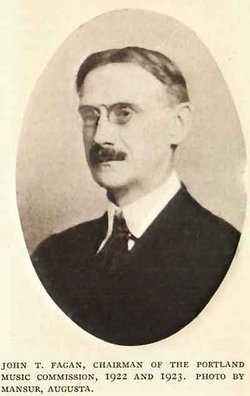 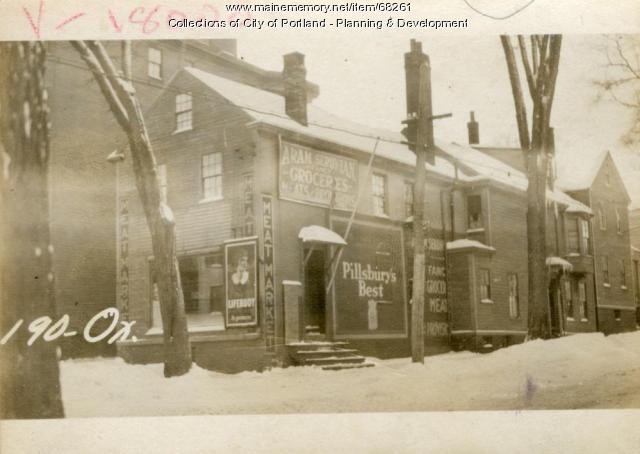 Both properties would go through various owners for the next 40+ years. For #12 Winter, the period would be mostly under the ownership of an Armenian immigrant family named Serunian. The family is best known for owning and operating markets around the greater Portland for many decades. 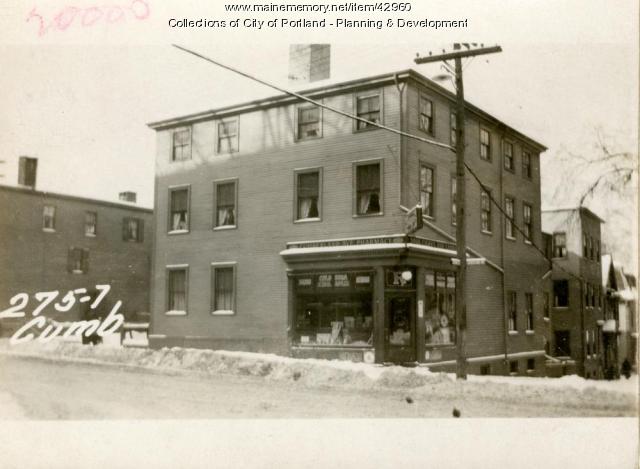 275-77 Cumberland Avenue. The home of the Portland Boys Club in 1963. Mainememory.net

For #14 Winter Street, the Scammon family, Albert, and Ruth, would live there. Albert was a clerk for a clothing store. He died in 1961. Ruth was working as a librarian for the Boys Club of Portland in 1963. She would remain at 14 Winter Street until 1978 when she sold it to the current owner.