A very small house between Brackett and Clark Streets

This is a little story about a little house built by a big man. It could be about the big man himself but that story will wait for later when we see his big house on Spring Street.

The house barely fits its lot. The city assessor shows the lot at 1100 square feet and the house at 1050 square feet. A perfect home for someone who doesn’t want to do yardwork. Or park off-street.

Ammi Whitney, the big man, purchased the property on which our subject sits, and much more, from the estate of a soap manufacturer named Charles Gore in 1891. The current city assessment information gives a build date of 1890 but the deed history says that’s not right. The 1900 census doesn’t list the address on Gray, showing it on Ryan’s Court instead. That being said, city directories from 1892 on list 97 Gray Street and people residing there.

Regardless of when it was built, what was built was a very simple home for a small, narrow lot. The entry is on the long side midway along the wall which would have faced Ryan’s Court. There are few details nor any ‘style’ to speak of. I think it would fall into the architectural historian’s favorite catch-all, “vernacular”. It’s notable that much of the fabric such as windows and clapboards appears to be original. 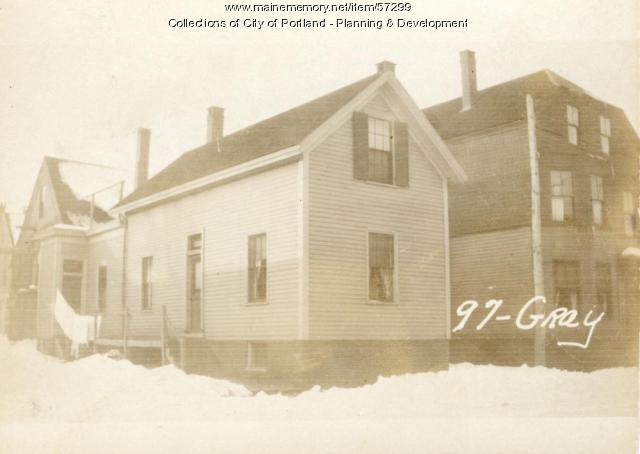 The first person to call 97 Gray Street home was William Edwin Ulmer. He was an attorney who practiced on Exchange Street. He lived there with his widowed mother Sarah until 1895-6 when he moved to Winter Street. The next tenant was George Keniston who was an engineer on the Boston and Maine Railroad. He and his wife lived there until 1902. Then Edward Russell, an engineer with the Maine Central Railroad, his wife Fannie, and their two children moved in. Edward died in 1913. Fannie remained in our subject until sometime around 1929. The 1930 census found Fannie living with her daughter’s family on Merrill Street on Munjoy Hill.
It was in 1929 that Ammi Whitney’s daughter Kate, who had inherited the property on his death in 1922, sold it to Perley Berry. Perley Berry was, I believe, a family friend in that he had witnessed a series of deeds in 1923 that reorganized some of Ammi’s bequests amongst the heirs. He was the treasurer of an insurance company in Monument Square and lived on Hunt Street in the East Deering neighborhood.

The rear block and façade of the building are intriguing in their decoration, flat roof with extended walls forming a parapet and brick rear wall. It is another building altogether when compared to the front. The tax assessment confirms this in the rear 18 feet being shown as a separate framed structure. Various insurance may help a bit.

The Sanborn map of 1886, above, shows that there was in fact, nothing on the northwest side of this block of Gray Street in 1886. It shows the lot for our subject house is empty. Directly behind is John H Lee’s Livery and Stables. The map notes that the backline for all the lots on this side of Gray Street is not parallel to the street. The lots get shallower the closer to Clark Street one looks. Behind lots, 85 through 97 was a stable. So, maybe the brick rear was wall was intended to block the odors and sounds from the stable. On the border of lots 97 and 99, there was a woodshed that ‘took up’ the wedge of land where the angled lot line met the square line coming from the lots abutting Clark Street.

The Richards map from 1914, above, click for larger version, shows the progression of the street in the intervening 16 years. All the lots on this side of Gray Street from Brackett Street to our subject have been built. The woodshed for Lee’s Livery is gone and Ryan’s Court has been run to Gray Street. The covered entrance that projects from the side of the rear section is shown on the map. All this leads me to speculate that the rear section was built first.

Perley Berry owned 97 Gray Street through the ’30s, 40’s and ’50s. Upon his passing in 1964, ownership was transferred to his widow, Elizabeth. Theodore Mowatt, an employee of the City of Westbrook, and his wife Betty were living there at the time of Perley’s death. Elizabeth sold the property to the Mowatt’s in 1972. They sold it to a real estate company named MICAH in 1975. 97 Gray Street is currently listed as a single-family home. Condition is very good.