A fine Queen Anne in the Oakdale neighborhood.

Its birth date and first few years are a bit obscure. It sits on lot # 65 of the plan for Fessenden Park filed by Arthur Marks and Vinton Earle in 1897. Marks and Earle took a $2000.00 mortgage for the “land and buildings thereon” for the lot from a physician named Davis Gilman in January of 1899. They discharged said mortgage in October of 1900. By that time, however, they had sold it to a real estate broker named George W Brown who then sold the “land and buildings thereon” to Llewellyn Morse Leighton on June 30th. Leighton held the lot until 1908 before selling it to Flora Leona Blunt. It’s possible that Leighton built the house we see in that 8 year period. It certainly is something he would have built but, it’s also something Marks and Earle would have done. Barring better evidence, I will go with M & E.

The house is a Queen Anne in form and detail. The mass is a rectangle nearly twice as deep as it is wide and is surrounded on all four sides with a verandah or piazza that varies from 4 to 9 feet in width. A curved bay on the southeast side and 3 sided bay on the front façade are the only breaks in the main rectangular body. The bays are carried into the second floor, although the side bay did not originally carry into the second floor. All this is capped cross-gabled roof with a large end gable on the southeast and twin gables on the northwest. The front bay becomes a turret on the third floor although this also is not the original arrangement. As seen in the 1924 tax photo, the bay was topped with a gable that overhung the clipped corners of the bay. The building is covered with cedar shingles in varied patterns.

The first confirmed residents at 140 Noyes Street were, as noted, Guy and Leona Blunt. The guy was born in Leeds in 1879 and Leona in Weld in 1887. They had had 2 children who died in infancy prior to 1910. They sold the home to Charles Bradley, the superintendent of the local Metropolitan Insurance Company in 1910. Guy would remain in Portland and run an auto repair garage on Preble Street for 2 decades before he disappears from the record. Leona doesn’t appear in the historical record after selling the house. It’s uncertain if, and for how long, Charles and Mildred Bradley lived in our subject. When they sold the home in 1917, they were living in Brocton Mass according to the deed. 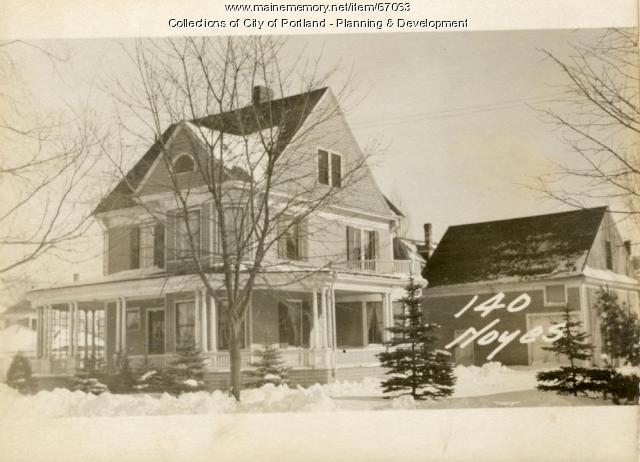 Other notable differences from the tax photo are the loss of the barn and the rear extension as been enlarged. The first difference is understandable but a shame. The barn helped to link the house to the lot and not leave it marooned in a sea of grass and pavement. That being said, old barns can be money pits, and sometimes hard choices have to be made. It’s lamentable nonetheless. The second change can be seen in the lack of the rear gable on the southeast side and, presumably, it’s counter on the northwest. This also explains the shingle-style wrapped window treatments of the rear gables. An interesting touch but not really in keeping with the style which tended more towards Colonial Revival than Shingle.

Charles and Ellen Thoits were the next family to reside in our subject house. Charles sold hats for the Byron Greenough Company on Middle Street. They were married in 1909 and had 2 sons when they purchased 140 Noyes Street and had two more in the 29 years they lived there. The purchasers in 1946 were a couple from Westbrook named Everett and Evelyn Johnston. They sold the property 2 days later to Lewis and Ada Hatch who also owned a house they had built on nearby Catherine Street before the war. Ada sold the property in 1958 to Lewis and Delores Thompson and moved to Falmouth. The Thompsons owned the property until 1979. 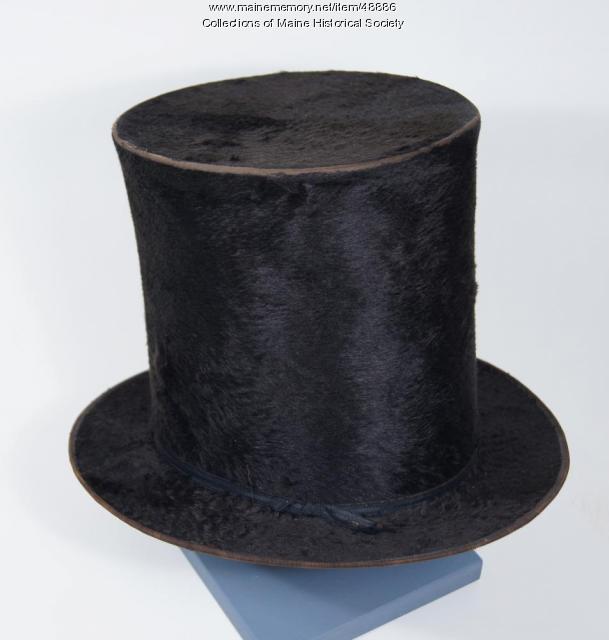 The house is currently owned by the principal of an automotive marketing company. Condition is very good.