A petite Second Empire in the Parkside neighborhood.

Thomas Wildes built houses. He was very active in Portland in the 1870s and ’80s. Thomas purchased the land for our subject from Mary Tucker in 1876. Wildes had completed our subject enough by November of 1877 to sell it to a blacksmith and carriage maker named Jarius Talbot.

What Wildes built was an oddly shaped, to match the lot, but nicely detailed single-family Second Empire home in the urban mode. Details are confined primarily to the frieze, window openings, and entry porch. The mansard roof is nearly vertical with no curve to be noted. This would have greatly increased the usable space of the second floor but left the exterior looking a bit ‘top-heavy’.

Jarius Talbot was born in 1830 to a mariner named Sewall and his wife Emma. He may have been born in Portland but that is not clear. He married Harriet Burke in 1850. Harriet was born to a blacksmith named John, I have not found a record of her mother’s name, in 1831. The Talbots had a daughter Hattie who died in infancy and a son Frank born in 1860.

Clipping from the Portland Daily Press for July 18, 1885. chroniclingamerica.loc.gov

Jarius and Harriet Talbot had a long-term boarder named Elsie Plummer. She was born in 1830 to a mariner, Andrew, and his wife Rebecca. Her younger sister, Francis, had died at the age of 4 and Andrew died 2 years later in 1838 at the age of 38. Rebecca died in 1854. By 1860 Elsie was boarding with the Talbots and working as a seamstress. She remained with them until her death in a horrible carriage accident on July 16 of 1885.

The front façade has the most detail and some of it is quite fascinating. The arrangement is straightforward with a somewhat narrow bay containing the entry and, no doubt stairways, on the left of a larger bay for the living spaces. A bump-out or bay window projects from the wall. The bay is trimmed with paneled bases with a heavily profiled molding and window sill above. The windows are cased with simple flat panels with a thin molding about 4 inches below capital. Above this, it gets interesting.

The frieze above the windows is comprised of simple horizontal panels framed with built-up moldings. Above this is a heavily projecting half-round molding which leads into a very deep dentil molding capped by a slightly projecting cornice. All very well constructed and a real sign of craftsmanship. What’s unique is the entire entablature treatment is carried from the bay window over empty space and integrated into the entrance porch. A singular detail that I have not seen anywhere else in the city. 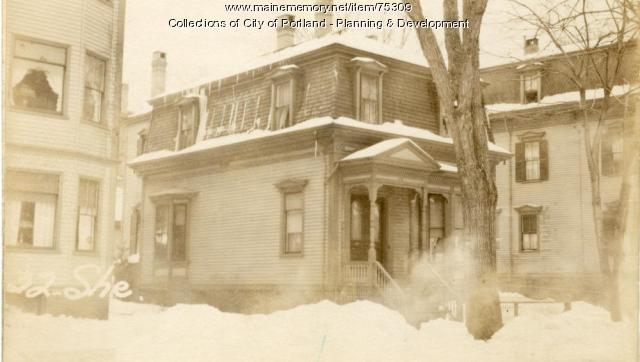 Harriet Talbot died of cancer in 1895. Jarius continued to live at 32 Sherman Street until his death in 1908. The property was inherited by Arthur Talbot who was Jarius’ grandson. The will stipulated that the property could not be sold for at least a year and, when it was sold, Arthur’s 3 brothers were entitled to $200 each. Arthur lived at 32 Sherman with his parents Frank and Martha. Frank was a founder of Talbot, Brooks, and Avery whom we encountered in the story of 104 Prospect Street. In 1913 Arthur transferred ownership of our subject to his mother, Margaret.

The entry porch carries the details from the bay. In addition, there are some chunky turned posts supporting the roof. The roof has a well-defined, closed, pediment. An interesting detail of note is the use of a Venetian Gothic arch form in the short projection of the porch on the right.

Close up of the gothic arch detail on the entry porch.

Margaret Talbot transferred 32 Sherman Street to her son Philip in 1932. She resided there until her death in 1943. Philip and Clara Talbot resided there until they sold it in 1950. This sale ended the Talbot family’s ownership after 73 years. Quite a feat given society’s increasing mobility over the period. The home is currently listed as a single-family residence. The condition is excellent.