A brick Italianate at the corner of Spring and Neal Streets in the West End. 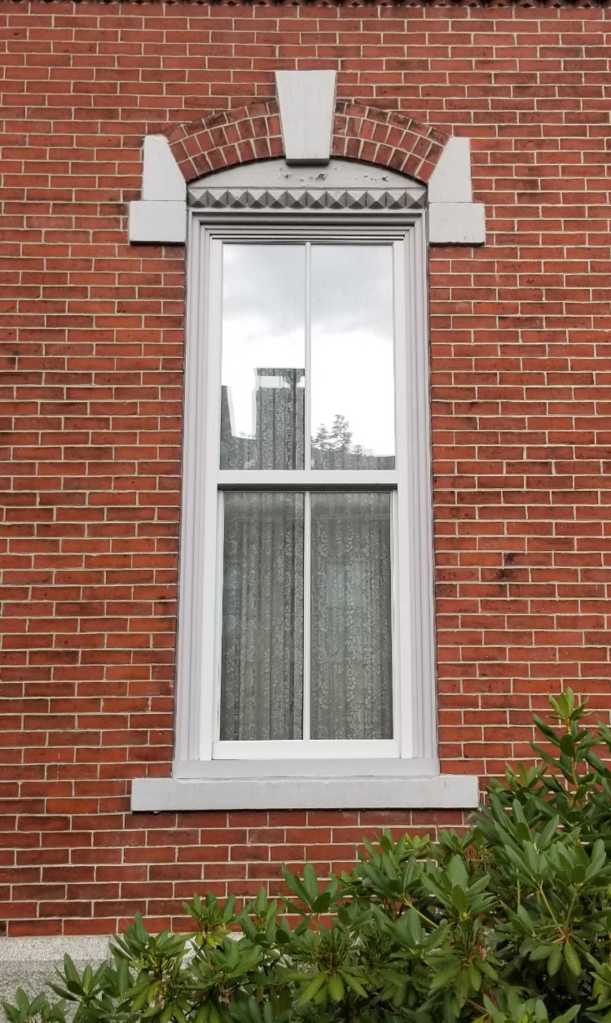 Boy howdy, those are some voussoirs you got there! To be pedantic, they are the imposts and keystone of the arches over the windows. Call them what you wish, they are ‘over scale’ to put it mildly. We are left to wonder if it was the wish of the client or exuberance on the part of the architect. The attribution of Francis Fassett as the architect is, as is quite often the case, circumstantial. There is no direct connection. The Portland Historic Inventory does not list an architect. All that is overshadowed by the quality of the design.

Of all the architects known to be working in Portland at the time, only Fassett and George Harding were capable of a design like this, and Harding’s work was solidly Second Empire in this period. Fassett had a history of working in the Italianate style as we have seen and the fluidity and verticality of the design is something he is deservedly well known for. Lastly, as if I needed more, a small mention in the Portland Daily Press for May 26, 1875, speaks of a block of stores being planned for the corner of Middle and Franklin Streets that was going to be built by Ammi Whitney, his former partner Hosea Kendall and Benjamin Chadbourne. The architects were Francis Fassett and son. Kirby and Merrill were the carpenters. The mason was John P Wescott who was said to be “one of the best masons in the city”. All of this leads me to think Fassett did the design for our subject. 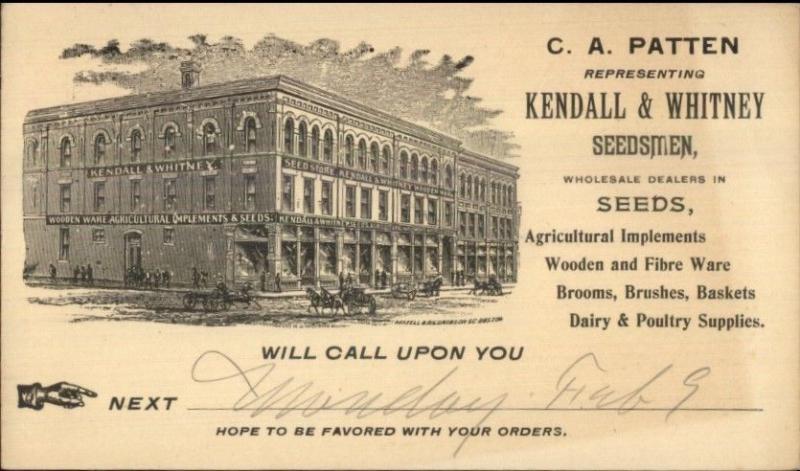 Ammi Whitney was 44 years old and a very successful man when he purchased the land for our subject in 1877. He was born to a prosperous farmer in Falmouth in 1834. He received no formal education beyond the grade school level. At the age of 20, he went to Boston where he went to work for a company called Parker and White Seeds. After a few years of learning the trade, Ammi returned to Maine and settled in Portland in 1858. In that same year, he formed Kendall & Whitney with the aforementioned Hosea Kendall. Whitney lived for the first few years he was in Portland at the American House, a hotel on Fore Street. The proprietor of the hotel was Samuel Haskell. His daughter Emily, sometimes listed as Ellen in various records, married Ammi in 1860.

The vertical movement of the steps into the portico, up through the second floor bay and window in the frieze is an element often employed by Fassett in his Italianate designs.

The house Ammi and Emily built is impressive. It’s a perfectly square box of nicely matched brick 42 feet on each side, 3 stories tall, the third being primarily in the garret. The brick is set with a very tight mortar joint which brings a more unified feel to the wall surface. The belt and string courses are very heavily defined and break each floor into its own delineated space. The third story is a complete entablature with architrave, frieze, and cornice all fully defined. A hip roof with a balustraded deck at its peak tops the structure. There is no record of any belvedere or ‘widow’s walk’ on the roof. 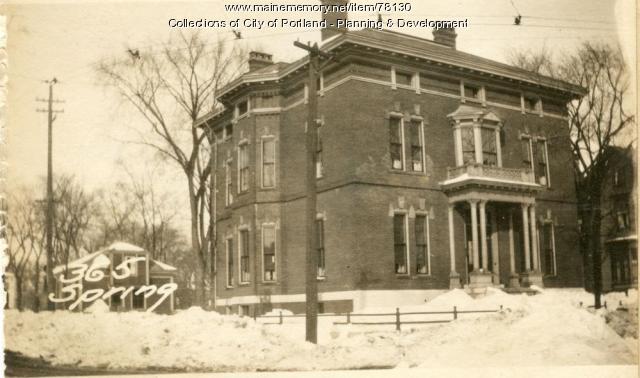 The Whitney’s had 4 children, Alice, Kate, Samuel, and Richard when they built or subject in 1877/78. A third daughter, Emma, was born in 1874 but died in infancy. Emily died of pneumonia in June of 1901. She was buried in the family mausoleum in Evergreen Cemetery. Ammi’s partnership with Hosea Kendall had been dissolved in January of 1873 although Ammi continued the business under the old name for several decades afterward. Whitney was something of a horseman. in 1870 he was a founding director of the Presumpscot Park Association which operated a trotting park where the Deering High School athletic fields are now.

Various mentions of Ammi’s equestrian activities appear in the local papers over the years including selling the ‘Ammi Whitney pacer’ to John Willey of Cape Elizabeth in September of 1883, being thrown from his wagon and injured when his horse was spooked in August of 1884 & having one of his prize horses escape and “bash it’s brains on a tree at the corner of Spring and Carleton Streets” in 1881. Keen readers will note Carleton Street does not currently touch Spring Street nor does it seem to have in the 1880s. As to where this event actually took place, we are left to wonder.

Ammi Whitney was civically minded as well as successful in business. He served on various committees as well as being appointed “measure of wood and bark brought by sleds or carts” in 1866. He was a long-time Director of the Casco National Bank and served on various boards including railroads and streetcar lines. He was a founding member of the Portland Country Club and the Bramhall League, a private social club that sat where the Cumberland Farms store is on the corner of Pine and Brackett Streets. 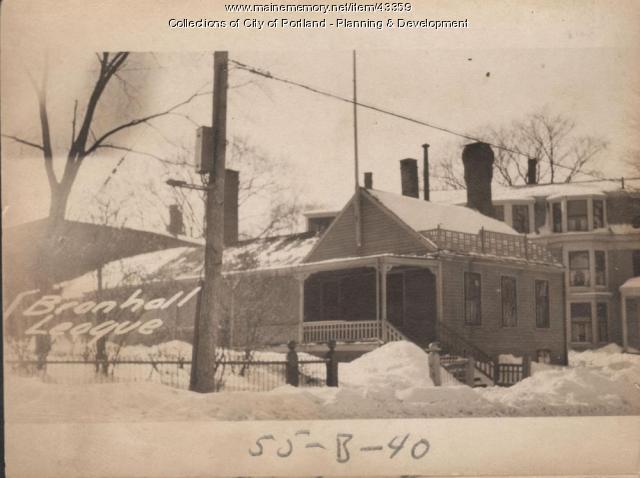 When his neighbor Augustus Brown died in November of 1890, Ammi was a pallbearer along with Sydney Thaxter who lived across the street and several others. He built housing in the West End including 4 modest wood frame buildings on Marshall Street in 1900 and a brick apartment building at 126 Neal Street in 1913. He purchased a 3 story brick house on Federal Street where the county courthouse now stands, had it disassembled, and moved to 71 West Street. He purchased the land for and laid out the eponymously named Whitney Street between Congress Street and Brighton Avenue in 1898.

Ammi Whitney died on January 10 0f 1922. The cause of death was pneumonia with complications of ‘senility and varicose veins of the leg’. He was 88 years old. He was buried in the family mausoleum with Emily. Ownership of 365 Spring Street had been transferred to Joseph in 1917. He was living on nearby Clifford Street while Kate and Alice were living in the family home. They would remain there through Kate’s death in 1943 and finally sell it after Alice died in 1953. 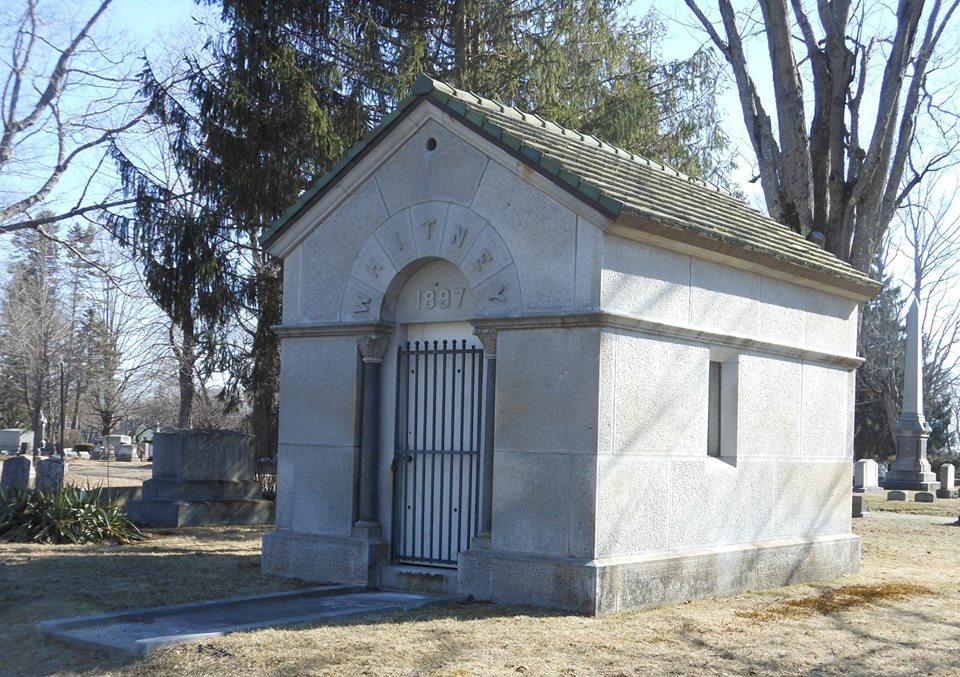 Ammi Whitney and his family are little spoken of today. This is a shame as they gave so much to our city. The Whitney name deserves to be in the Portland Civic Boosters Hall of Fame.
365 Spring Street is currently listed as a single-family home. Condition is excellent.