Children should never play with matches! Although in modern times we may change “matches” to “lighters”, the adage holds as true today as it did on June 7th of 1864. That was the day that the son of a furniture dealer named Francis Smith was playing with said matches in the woodshed of the family home on Spruce Street. The incendiary caught some dry wood alight and before it was over, 2 houses were destroyed and 3 damaged. All this was reported by the Portland Daily Press on the 8th of July. The houses destroyed belonged to Messer’s Smith and Henry H Starbird. Starbird had built them both and sold Smith his in March of 1863. Smith sold the land back to Starbird on July 30th. The Portland Daily Press for October 14 of the same year reported that Starbird was rebuilding on the Spruce Street property.

Detail of 1853 Portland map showing the extension of Spruce Street as yet unnamed. Osher Map Library

Spruce Street had originally been laid out from Brackett to Clark Streets in the mid 1820s. It wasn’t until the 1850s, when Portland was experiencing something of a boom, that it was extended to Emery Street although the map above, from 1853, does not show it named as such beyond Clark Street. This timeline for development helps to explain the movement from Late Greek Revival to Italianate styles and details as we walk from Clark to Emery Street. Our subject is one of these ‘transitional’ houses.

Henry Hamilton Starbird was born to a Gray farmer and his wife in 1816. He along with his elder brother Thomas learned the mason’s trade and moved to Portland to make their livings. Thomas arrived in the early 1830s as he appears on the 1834 city directory living on Gray Street. For Henry, we can be get pretty close on the date of his move. On October 1 of 1847, Henry sold his father a lot in Gray. The deed gives Henry’s residence as Gray and his occupation as ‘brick layer’. 7 weeks later, on November 25th, Thomas and Henry Starbird purchased a lot of land on Tate Street from a tailor named Daniel Brazier. On this deed, Henry was listed as a ‘mason’ living in Portland. Henry had married a woman from Westbrook, Hope Cobb, in 1845.

The house is a for all intents an ‘East Ender’ with the entry and stairwell on one side and a wider living area, usually with a bay window, next to it. The layout owes it’s heritage to the gable entry Greek Revival houses of the mid 18th century. Over time, the details of these houses would move from Greek to Italianate. Although 59 Spruce Street is ‘late’ in the development, it still carries some Greek elements. Most notable being the pilasters with their fully developed capitals and architraves, the second story windows being completely below the bottom line of the pediment and the full architraves running down both flanks of the building.

Henry Starbird died in 1867. After his death, Hope moved into a home on Bracket Street owned by a widow named Clarissa Marble. Hope died in 1873. She sold our subject to Stephen Knight in 1871. Stephen Dow Knight was a paper-ruler with Loring Short and Harmon on Middle Street. He was born to a cooper named Jabez Knight and grew up on Salem Street. The same year Henry Starbird died, 1867, Stephen married Emma Loring, whose brother George was Stephen’s employer. 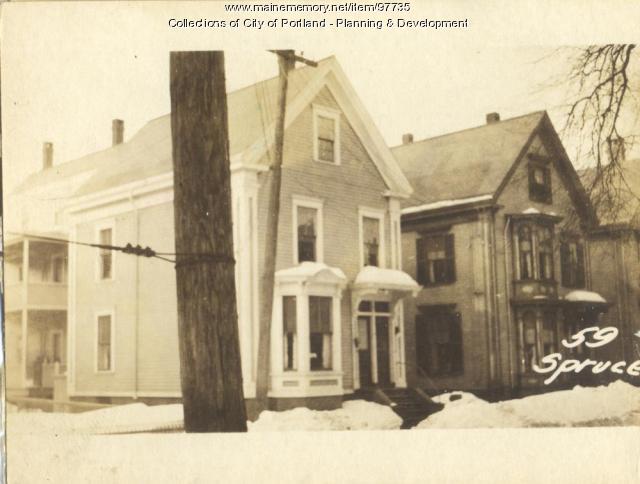 59 Spruce Street in 1924. Note the main entry has been significantly altered since this photo was taken. Mainememory.net

59 Spruce Street has always been a multi-family property. Although listed currently, and in 1924, as a three-family unit, it seems to have spent most of its life hosting two. Here are a few of the tenants over the years.
1880 Samuel and Betsy Lufkin. Samuel was a ‘jobber’ or wholesaler of “caps, hoods, etc. for men” and kept an office in ‘Dry Goods Row’ on Middle Street. The Lufkin’s had owned and lived in one side of the double house on the corner of Emery and Spruce Streets but lost it in a court case in 1879. At some point, they moved to Boston where Samuel died in 1895 and Betsy in 1902. They are both buried in Evergreen Cemetery.
1895 The Reverend Henry McGilvery. McGilvery was the pastor of the First Presbyterian, now Greek Orthodox, Church at the corner of Park and Pleasant Streets. His stay in Portland was brief as he was installed as the pastor of the White Lake New York Presbyterian Church in 1899 and the Thompson Memorial Church in Philadelphia in 1902.
1900 Hans and Tina Smith. Hans was born Hans Peter Schmidt in Ravsted Denmark in 1870. Tina was born Lovise Laurentine Brunn in Gislev Denmark in 1866. They both immigrated to the US in 1882. They married in Portland in 1896, a year after Hans joined the Portland Police Department. They had 2 daughters while they lived on Spruce Street. Hans died from injuries received while directing traffic in 1930.
1910 Arthur and Hattie Seal. Arthur worked as a clerk for the New England Telephone Company.

Emma Knight died of a cerebral hemorrhage in June of 1914. Stephen died from injuries sustained in a fall in November of 1917. They had no surviving children so Stephen’s will passed it to his sister Eleanor Owen. She sold it to Kathleen Spear in 1922. Kathleen and Leon Spear were married in 1917 and had a son, Clifford, in 1918. Leon worked as an engineer for the telephone company. They sold to Annie and Israel Glovsky in 1924 when they moved to Cape Elizabeth. The Glovskys ran an A&P Grocery store on Myrtle Street. They lost 59 Spruce Street to foreclosure in 1927.

59 Spruce Street would see 4 different owners in the period from 1927 to 1942 when it was purchased by Mary D Lowell. Her husband Harry was a carpenter. It would remain in the Lowell family until 1972. The house is currently listed as a 3 family. Condition is excellent.