A fascinating Greek Revival double-house in the Bayside neighborhood.

My first thought was “Wow! That’s old!”. Followed directly by “Why is it in Bubba’s parking lot?”. 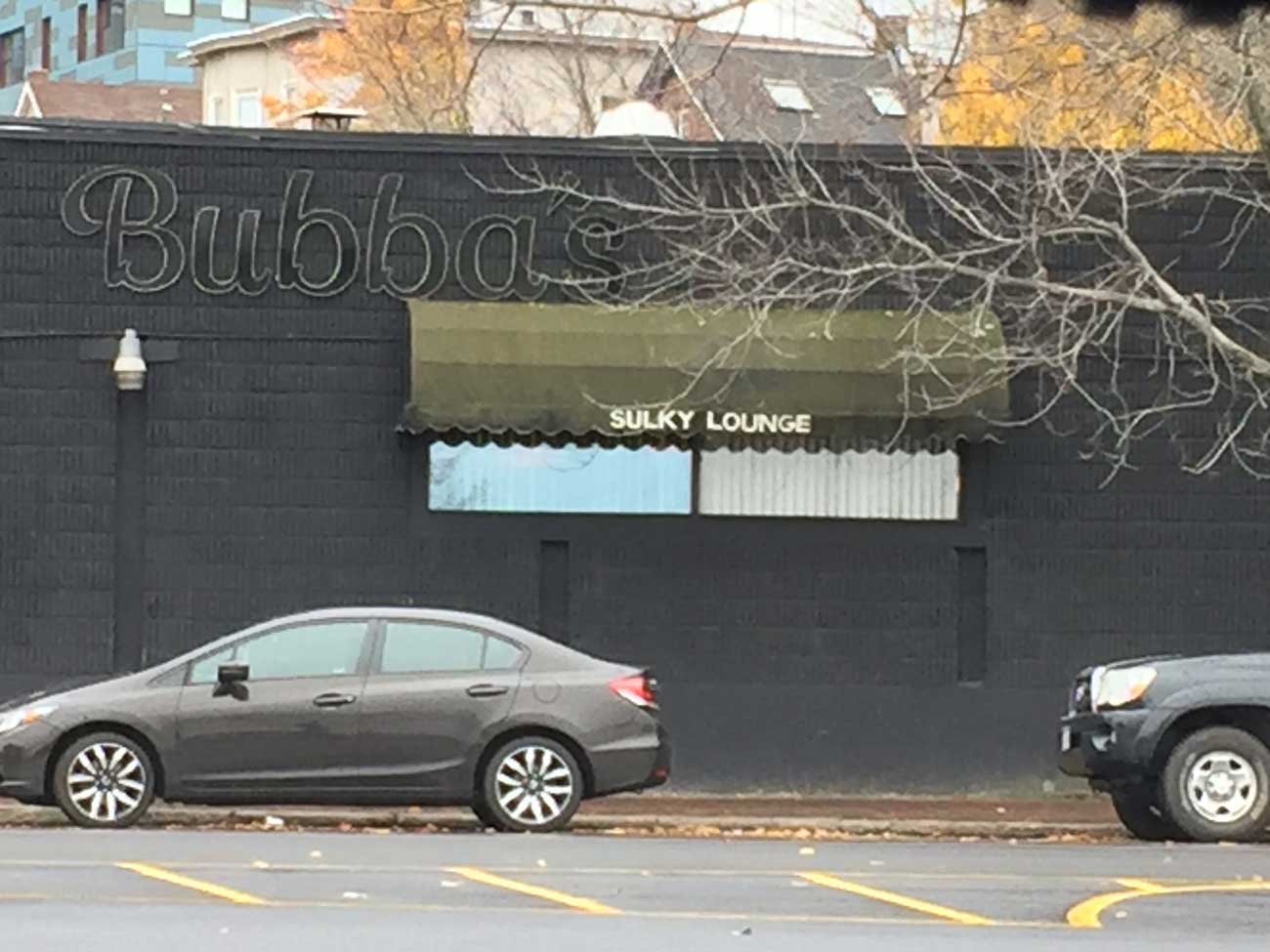 The area around Back Bay, it’s really a cove and not a bay, was growing both in population and size in the 1840s and ’50s. The Clapps had started filling the margins of the cove in the mid-1840s in advance of the coming railroads. By 1850, they had created enough new land to sell a large parcel bordered Chestnut Street on the south, Pearl Street on the north, and what are now Somerset and Kennebec Streets to the west and east respectively to the York and Cumberland, later the Portland and Rochester, Railroad for a station. Our subject was built during the period the station was being constructed.

Bayside in 1850. Our subject is the red dot at middle-left. https://oshermaps.org/

Benjamin Megguire was a joiner who had been born in Poland Maine in 1814. When he married Charlotte Merrill of New Gloucester is unclear. Their first child, Adrian, was born in 1845 when Charlotte would have been 25. The census of 1840 has Benjamin in Poland as the head of the household with 4 males and 3 females. The census did not give individual names before 1850 so we are left to extrapolate who was in the household by other means. There was one female between 10 and 20, one between 20 and 30 (Charlotte?), and one over 40. Their move to Portland took place sometime in late 1844 or early 1845 as the city directory for 1844 doesn’t list Benjamin but the 1845 directory does. They were living on Parris Street at that time. Also, the birth record for Adrian says she was born on June 4 of 1845 in Portland.

What Benjamin built was a simple rectangular double house in a naive Greek Revival Style. Details are sparse, mostly contained to the front façade. The windows are tall and surrounded by chunky, flat trim. Extremely slim corner boards, too small to call pilasters, carry a simple entablature now somewhat obscured by the paint scheme. The small windows piercing the entablature would have let some light into the second-floor rooms but it would not have been much. The dormers on number 2 are later alterations as can be seen by the ghosts of the old entablature windows below them.

The portals are an interesting affair. #2 appears to be original but for the storm door. Much like the façade, simple flat pilasters flank the doors and carry a two-part entablature. It’s my belief that the portal for #3 was rebuilt when the early 20th-century door was installed. There may have been decay in the original so it was replaced. A remuddlers dishonorable mention goes to the carpenter for choosing not to follow the old line of the architrave-frieze boundary.

Benjamin Megguire sold #3 to his brother-in-law John T Merrill in 1853. The deed states “the double dwelling house lately built by me”. It also included a 12’ right of way to Mechanic Street which would later be named ‘Mechanic Place’. Merrill paid $725.00 ($23,350.00 in 2018 dollars). Benjamin may have used the proceeds of the sale of #3 to finish #2 as it was February of 1855 when it was sold to an iron foundry owner named John Farrow. Farrow sold it to a wheelwright from North Yarmouth named John White and his wife Mercy in 1856. 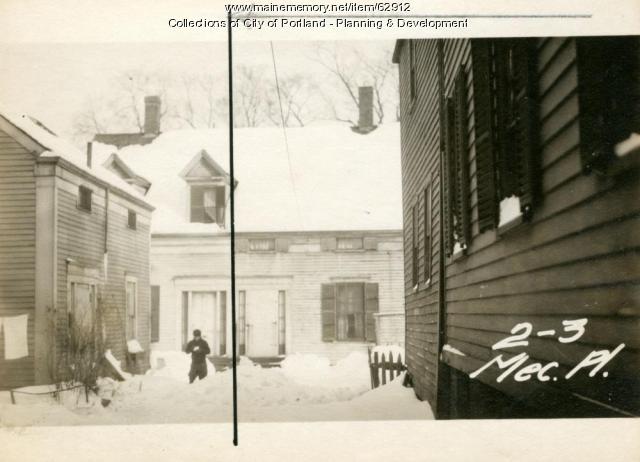 2-3 Mechanic Place in 1924. Note the house on the left that would seem, judging by the details, to have been built by Benjamin Megguire as well. Mainememory.net

John and Mercy’s eldest daughter Mary died in January of 1859 at the age of 36. She was unmarried. The youngest daughter Lucretia died in November of the same year. She was 22 years old and also unmarried. Both died of ‘bleeding of the lungs’ or pulmonary hemorrhage in modern terms. John died in 1864 and Mercy in 1874. Their daughter Margaret inherited 2 Mechanic Place. She would reside there until her death in 1914 when she passed the property to her brother Horace. He sold it to Bessie Wescott in that same year. The White family gravestone is well known amongst regular visitors to Evergreen Cemetery as the “Finger to Heaven” stone. 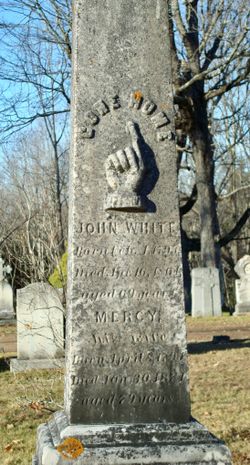 Bessie and Edwin Wescott did not live in #2 Mechanic Place in the two years they owned it. They sold it to Frank and Eliza White in 1916. Frank does not appear to have been related to the previous White family who had resided there. Interestingly, Bessie and Edwin were buried in the same plot and shared the same stone in Evergreen as John and Mercy White. I have not been able to determine the relationship. Frank and Eliza White resided in our subject until they ‘sold’ it to the Home for Aged Women in 1946. Her deed to the Home states “for one dollar and other considerations” which is the standard language. What is notable is the Home for Aged Women sold it to Fred Hutchins on the same day for “Four Hundred Fifty dollars ($450.00)”. I am inclined to think that the Whites donated it to the home. It’s worth noting that in 1924, the City of Portland considered both #2 and #3 Mechanic Place to be “Worthless Structures”. They were two of 12 in the city.

Back at #3 Mechanic Place, the Merrills lived there less than 3 years before selling to a widow from Yarmouth named Eleanor P Mason and her 6 children. Eleanor’s husband, Samuel Jr, had died at sea in 1848. She would reside there until 1866 when she sold it to Samuel Mayo. Mayo owned the property for 11 months when he sold it to Ellen Carle in 1867. Charles Carle senior was well known as a long-time rider of the ‘mail stage’ and retired from the Eastern Express Company in 1861. Their son Charles Jr was employed there. Charles Sr. died in 1871 and Ellen in 1880. Her will passed ownership to Charles Jr.

Charles had a couple of accidents during his years as a driver for the Eastern Express then American Express. His injuries in these accidents may have led to an incident on March 19, 1893, when he was found by his wife Sarah “trying to choke himself”. Later the same day he “thrust a screwdriver into his ear”. This all was reported in the March 21 edition of the Portland Press. By March 23, the paper was reporting he had recovered. Charles died in 1903. He transferred it to their only daughter Alice when Sarah died in 1896. 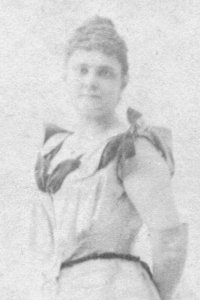 Alice Isabella Carle was something of a child prodigy. At the age of 8, she was singing in school pageants and Christmas musicals. By the time she was 15, the city was holding regular concerts headlined by her performance and used to raise money for her continued education and training. She would become a noted member of several traveling troupes performing Gilbert and Sullivan-style operettas across the country. The Portland Press would regularly update the locals on her travels. In 1875 she received the following review from a Boston paper for her role in Julius Eichberg’s ‘Sir Marmaduke’, “She is a bright-eyed brunette, quite young, and of a pretty face and figure. She has a clear, strong, and brilliant contralto voice, capable of fine execution if she succeeds in overcoming a decided nasal tendency”.

Alice married Charles Seaver in Belmont Mass in 1881. They had a daughter who died in infancy in 1883. Her career continued to climb with each year. She performed in the Mikado with the D’Oyly Carte Theater in the US and England including Portland City Hall in 1886. Her marriage seems to have foundered by this time as she was billed under the name ‘Miss Alice Carle’. In 1900, she listed her marital status as ‘divorced’. Charles listed himself as a ‘widower’.

After the death of her mother in 1896, Alice Carle returned to the stage. The September 16 edition of the Portland Daily Press for that year noted she had signed as the ‘prima donna contralto’ for a New York opera company being run by the Moravian impresario Maurice Gau. But it didn’t last. The Daily Press for June 21 of 1897 noted she had returned to Portland and the October 2nd edition carried the following: “Alice Carle Ill. Board of Alderman ask for a guardian for her”. Frank and Fannie Chase were neighbors who ran a grocery store on Portland Street. They petitioned the board for guardianship as Alice was currently ‘unsound of mind’. A Dr. King noted that “she would probably recover” but she currently “passed the time singing, weeping, laughing and enacting scenes in which she had formerly taken part”. The request was approved and a guardian appointed. Alice’s appearance on the 1900 Census gave her residence as the Augusta Insane Asylum.

How long she was there is not clear. She does not appear in the 1910 census. By 1920, she was married to a James Place who was born in Cape Elizabeth. They were living in Oakland California and James was a motor man on a street railway. Alice died in California 1934 and James in 1939. She had sold #3 Mechanic Place to Mary Delany, who had been the tenant, in 1929. The Delany’s would own the home until 1998 when it was sold to the current owner.
#2 and #3 Mechanic Place are currently listed as single-family homes. Both are owned by the same person. Condition is poor.