A late Greek Revival on the harbor slope of Munjoy Hill

It’s an odd thing. You really cannot miss it. Perched on a rise with the weight of the hill trying to push it off. In defiance, it spreads its legs and plants itself firmly in place. It wasn’t the best location from a builders standpoint what with the lack of a place to secure the building but it was a great spot for an industrious person who wanted a view of, and a piece of, the city’s growing industrial might. That person was Deacon Arthur Libby. 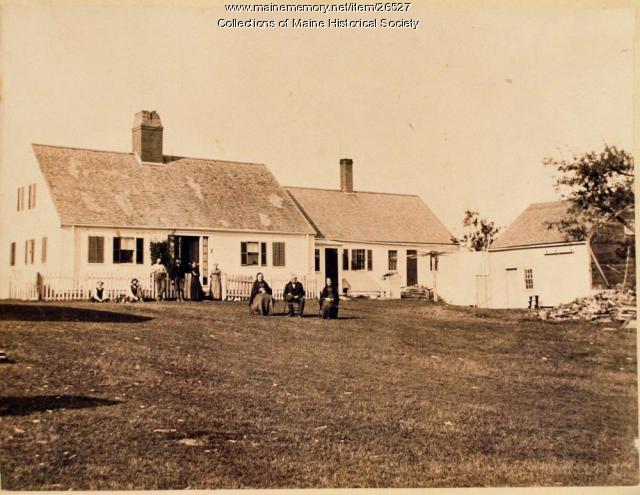 By the time Arthur Little was born in 1819, his family had been in Scarborough for almost 200 years. The first to bear the name, John Libby, came in 1637 under an indenture to John Winter at Richmond island. After completing his indenture, Libby built a small home near the eponymous Libby River. He was driven off in the Wampanoag wars but returned and resettled. Arthur was born in the family homestead. Arthur married Miriam Mason of Stroudwater in 1846. They had 5 children before Miriam’s death, at the age of 30, in 1854. By that time, the family was living on Waterville Street, just below our subject, while watching their new home being built.

The house is a late Greek Revival in its shape, fenestration, and decoration. Strong, highly detailed pilasters mark the corners of the second floor. On them rests a complete entablature that stops at the returns thus creating an open pediment. All this is as it should be for the time and style. It’s the first floor, and the diamond window of the second floor above the portico, that makes 23 Waterville Street unique.

23 Waterville neighborhood from the 1886 Sanborn Map. Library of Congress

In November of 1858, Arthur married Elizabeth Dresser. She was the 22-year-old daughter of Robert & Sophia Dresser. She lived at 2 Atlantic Street. She had 3 children with Arthur. Even though he was in his 40s, Arthur served in the Civil War. He worked on the USS De Soto in 1862/3 during the Mississippi River Campaign and received an honorable discharge. He also was a long time member of the St Lawrence Congregational Church where he served as a deacon for many years. 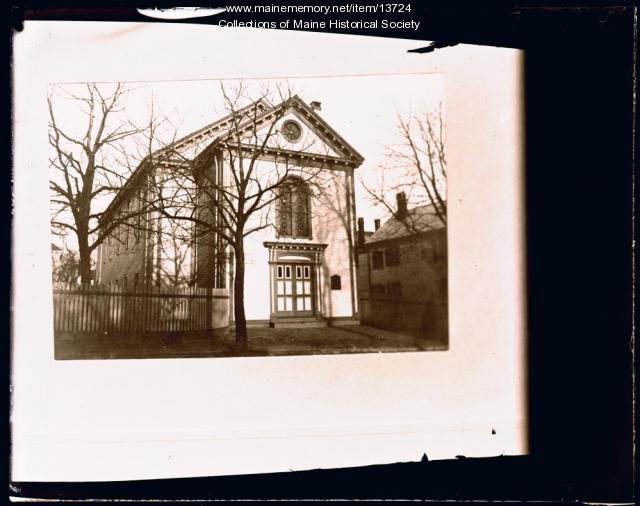 The diamond window on the second floor and the entry portico are, in my opinion, are not original. The window is simply not right for the style or time. It’s much more fitting of the 1880s or 90s. Also, the trim of the window is completely different than all the other windows. Then there is the portico. The most glaring issue being it does not fit the entry. It’s out of scale and the cornice extends beyond the left side of the house. The details of the frieze, especially how it interacts with the belt course, is jarring and not in keeping with the house overall. We won’t get into the plastic gutters.

In 1864, Arthur Libby sold our subject to a blacksmith and mold maker named John Burns. Not much information exists about John Burns. He was born in Ireland in 1839. He never married and died in 1868. That is pretty much the total information available. The property was inherited by his brother James and on his death in 1886, it was passed his sisters Annie and Belinda. Belinda transferred her right to Annie. On Annie’s death in 1895 her son Robert inherited the property. In 1907, he transferred it to his sister Agnes. There were several more transfers among family members in the teens and twenties before being sold to Angela DiBiase in September of 1924. 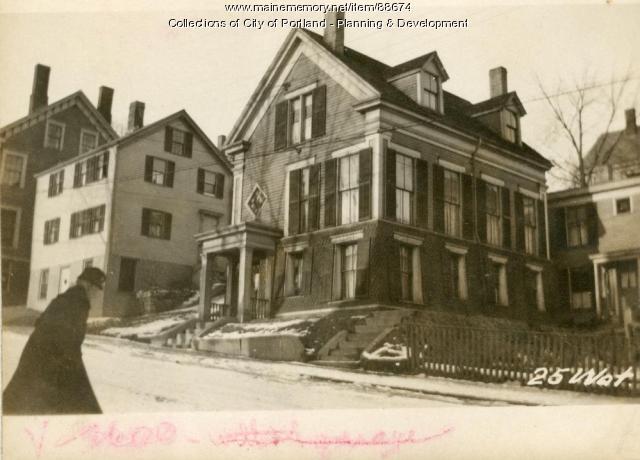 The first story is noted for the heavily battered walls on the south and east sides. At first, they seem to have no purpose but looking at the north and east sides the answer is obvious. With the house sitting on a rock and the aforementioned north and west sides pushing against it, the other walls are thickened to resist the forces trying to topple it from its perch. Although a straight forward solution to an engineering problem, it creates a bit of an aesthetic conundrum. The windows are set at the inner line of the wall thus creating very deep wells from the outside. These wells would seem to create a lot of shadows on the inside that would be somewhat alleviated by the southeast orientation of the building. Also, the placement of two deep windows on the corner and shorter windows on the rest of the first floor, while maintaining the 6 over 6 arrangement of the lights on all the windows, creates a ‘false’ rhythm on the facade. If the tall windows were 9 or 12 over 6, the facade would feel more ‘of a piece’.

Angela Di Matteo was born in Abruzzo Italy around 1900. Maybe as late as 1904. Her family came to the US in 1912 and Portland in 1913. She married a masonry contractor, also from Abruzzo, named Camilo DiBiase in 1919. Camilo was born in 1898 and came to the US in 1913. Their marriage certificate gives Angelas age as 15. They would have 2 daughters in their 19 years at 23 Waterville Street before selling it to a court clerk named Matthew Stanhope and his wife Margaret in 1943. The Stanhopes did not remain there long as the 1950 Census has them in Boston. The Stanhopes divorced sometime around 1950 as that was the year Dorothy took possession of the property under her birth name of Watt.

23 Waterville Street saw 5 different owners between 1950 and 2005 when the current owner purchased it. He is a former director of the Maine Department of Human Services.

23 Waterville Street is listed as a 2 family dwelling. The condition is excellent.