A funky Second Empire in the Bradley’s Corner neighborhood

The ‘lure’ of the suburbs is not a new thing. Thomas O’ Brion was a very successful merchant and trader for many years prior to the Civil War. In the early 1840’s he built a new home on State Street near Congress that was a very formal Greek Revival on the street facade with it’s large Ionic columns and closed pediment. 20 years later, he bought the palatial estate that used to stand across the street from our subject. In 1868 Thomas bought the land from Capisic Street along the west side of Stevens Avenue all the way to what is now Rudman Road. From that lot, he carved off a lot that ran from Capisic to Cobbert Street and built our subject. He transferred the property to his son Edward in 1873. The O’Brions had moved ‘out of town’. 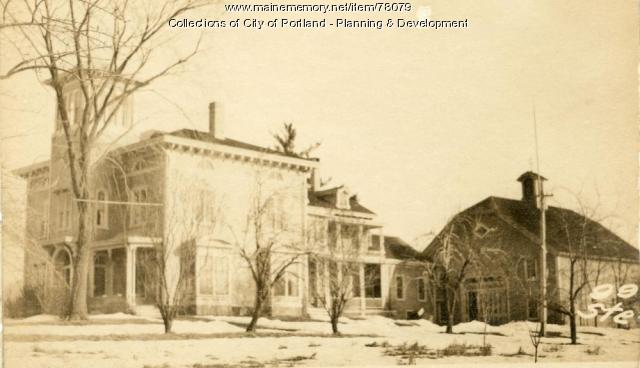 Edward was born in 1851. He married Maria ‘Nettie’ Butler in 1877. She was the daughter of a flour merchant named Alonzo and his wife Mary. The O’Brions had 3 sons, Phillip in 1878, Carleton in 1882, and Thomas in 1887. Edward started out farming but moved into selling insurance. In 1908 he founded Turner Barker Insurance with Philip Turner and Benjamin Barker. The company still exists today under the Clark Insurance banner.

What Thomas built is an odd take in a Second Empire country house. Its first floor is pretty standard fare with tall, narrow windows grouped in pairs and stacked bays. The second-floor windows are round-topped with heavy hoods above. In the center of the second-floor facade, a triangular window sits between the dormers. A very tight dentiled architrave sits just under the bracketed eaves. The roof is sort of Mansard with the initial level being very steep. This terminates just above the second-floor windows with a very shallow hipped roof above.

Originally there was a porch that spanned the full width of the front facade with a substantial roof above the entry. The 1924 photo shows a small enclosed entry. There were originally 2 chimneys set symmetrically. The property also had a barn where the current garage is that was much more in keeping with the style of the house. 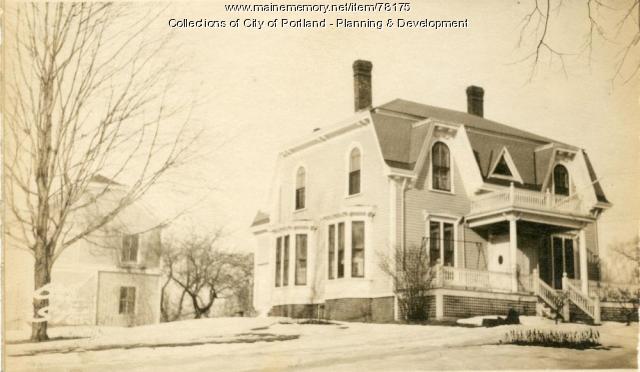 In 1920, Edward and Maria moved to a boarding house on State Street where Mercy Hospital now stands. Maria died in 1925. Edward transferred 88 Steven Avenue to Carleton O’Brion that same year. He died in 1938. The property came with a mortgage for $6000. Carleton paid that one off and took a new mortgage for $4316 in 1934. That mortgage was foreclosed on by the in 1941.

The property was sold to the treasurer of the Cumberland Savings and Loan Company, Bertrand Cobb, and his wife Phyllis that same year. Bertrand was a Deering native and Phyllis was from Quincy Mass. They had married in 1933. It was the second marriage for Bertrand. He had a son, Joseph, from his first marriage. Bertrand died suddenly in 1952 at the age of 56. Phyllis sold the house in 1954. Phyllis was a long time church organist who was a member of the American Guild of Organists. She died in 2004. 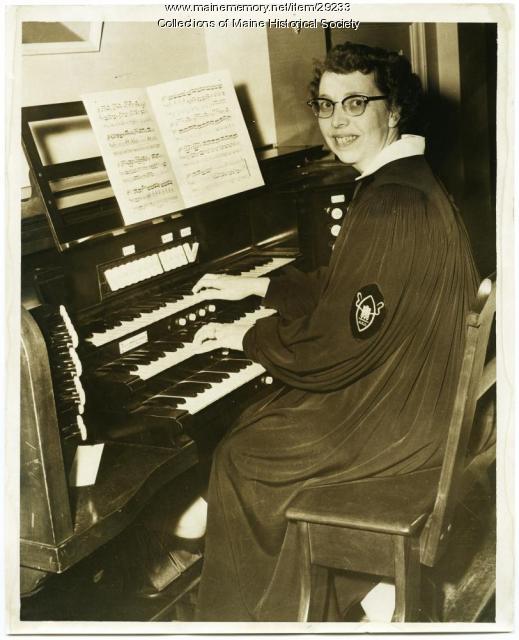 88 Stevens Avenue is listed as a single-family home. Condition is excellent.