A modest Arts and Crafts in the Deering Center neighborhood.

Sometimes the stories write themselves. Recently, while researching a subject unrelated to the blog, I came across the 1924 tax photo of our subject home. It struck me as somewhat unique for its place and time. Then I saw the name of its builder and I was doubly intrigued. A quick Google search showed a whole story waiting to be told.

Karl Arthur Von Rydingsvard was born on November 23, 1863, in Rolanda Sweden. He studied at the Royal Technical School in Stockholm. He immigrated to the US in 1883 and established himself in New York City where he worked for the Herter Brothers. He moved to Boston in 1885 where he taught decorative carving while working for several different furniture makers. He married a local music teacher, writer, and singer named Anna Davis in 1886. Karl established a school for carving in New York then relocated it to Brunswick Maine.

The Rydingsvards attempted to capitalize on Karl’s vague aristocratic background as noted by the ‘Von’ in the name. They published various books and sheet music wherein they styled themselves “Count” or “Dutchess” or “Lady Anne von Rydingsvärd” or “Baroness von Proschwitz,”. it was all an act and some Boston newspapers began to take note. Karl’s frequent philandering lead to a ‘scandalous’ divorce in 1897, He married his former student, Ida Simpson Jackson, in 1898.

Karl and Ida purchased the property for our subject in 1920. The seller was Percival Baxter. his father James had laid out the neighborhood in the 1880s after purchasing the land from FOJ Smith’s widow. What the Von Rykingsvards built was a simple structure 25′ square with a small extension on one side. It is 2 stories tall with simple ‘dustpan’ dormers on either side of a steep roof. There is an 18′ x 24′ extension at the rear that was originally the studio for Karl and Ida. It has since been incorporated into the living space as has the diminutive garage. The exterior is finished with rough-cast stucco with an applied stick pattern in the gable. Keen-eyed observers will note the entrance has been relocated from the left front to the inset of the right ‘bump out’. The portal is no doubt Karl’s work and it’s good to see it ‘on display’. Makes one wonder how much more of the couple’s work is inside. I believe the brackets supporting the hood over the entry are original but the current hood is definitely a replacement better scaled to the portal as it now exists. 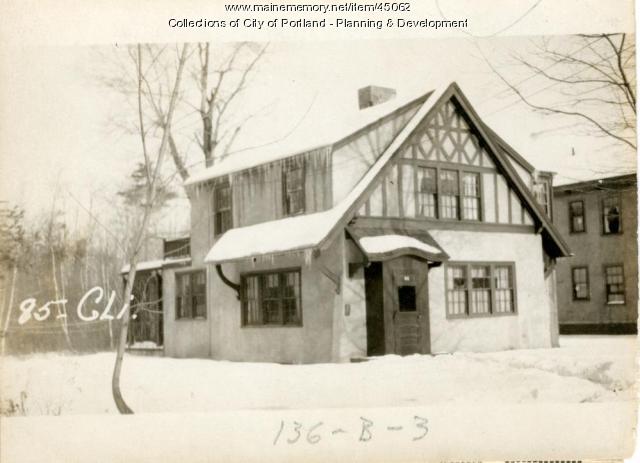 Karl and Ida spent the 20s and 30s traveling, studying, creating works of art, and consulting with various interior design and furniture companies around the country. He taught at many institutions including Rhode Island School of Design, Troy School of Arts, Columbia University, and others. In 1941 tragedy struck.

Karl and Ida Von Rydingsvard from their 1924 passport application. FamilySearch.org

The details are not clear but, sometime around April 21 of 1941, a ‘grass fire’ behind 85 Clinton Street got out of control. In an attempt to stop the fire, Karl was severely burned. on May 5th, after what had to have been 2 agonizing weeks, Karl A Von Rydingsvard died of his injuries. He was 78 years old. Ida may have injured as well as she died 2 weeks later on May 21. After Ida’s death, the property was inherited by her sister Beda Voris. Beda’s husband Edwin was a salesman for the Cumberland Power and Light Company. They had married in 1940, it being the second marriage for both. Edwin died in 1942. Beda sold the property to the bandmaster for the Portland School System, Joseph Gaudreau, in 1944. Joseph was born in Bath in 1892 to a police officer and his wife, both Canadian immigrants. Joseph attended local schools and served in the US Marine Band in WWI. He never married and lived with his elder sister, Mary Perry, for most of his adult life. He died in 1952.

85 Clinton Street passed through several hands in the 50s before being purchased in 1960 by an interior decorator who worked for Lancaster Furniture named Herbert R Schwartz. He was born in the Bronx in 1929. He attended the Cooper Union before working with several furniture companies. In 1955 he moved to Maine and worked with Lancaster Furniture before going out on his own in the mid-60s. He was a prodigious fundraiser for the Maine Democratic Party. He was also a well known historic preservationist. He and his wife bought, restored, and operated their design firm from the How House on Danforth Street for many years and were also involved in the groundbreaking restoration of the Nathan Nutter House on Pleasant Street. Herbert Schwartz died in 2006. His obituary can be found here. His widow and granddaughter currently own the property.

85 Clinton Street is currently listed as a single-family home. Condition is excellent.