A sturdy Greek Revival in the Bayside neighborhood.

It stands alone in a sea of asphalt. Once it was surrounded by wooden houses now gone. But for the brick house on the corner on Oxford Street, it’s the only survivor on this side of the block. From it’s building in the late 1840s, it has seen the rise and fall of the railroads and an industrial revolution. All of this change taking place on land that didn’t exist when it was constructed. The Back Cove area was an area of some industry such as rope walks and potteries in the early part of the 19th century. The bay was accessible to some shipping but was, overall, a swampy, marshy area that held little interest to most city residents. With the coming of the railroads in the late 1840s, all that changed.

Edward P Thompson was born in Nova Scotia in 1819. When he came to the US is unclear. He married Hannah Gooding in Pownal in 1844. They had no children. Edward was a mason by trade. The 1850 Census listed Edward and Hannah on the foot of Cedar Street. Living with them were 2 apprentices, Eben Moody and Francis Eveleth. Given this information, we can be comfortable in stating that Edward built our subject. As Edward purchased the land from Moses Merrill in July of 1845 and died of tuberculosis in February of 1853, we can put the build date inside that 7-year window. After Edward’s death, Hannah sold the property to Sarah Loring in July of 1853.

What Edward, with Eben and Francis’ assistance presumably, built is a solid, unpretentious, Greek Revival that’s a bit out of proportion but handsome none the less. It sits on a base of large granite slabs that are well joined. The bricks are laid in a running bond and are uniformly sized and colored. The pointing appears to have been recently redone and looks to have been a well-executed job. Exterior detailing is limited to the entablatures which are nicely scaled. The first floor windows on the street and entry facades are very deep with their sills nearly at the floor line. The current 6 over 6 windows are certainly not original with their rails and stiles being far too thick for the style. All the windows have brownstone sills and lintels which, as has much brownstone used in the area, suffered from spalling caused by the winter freeze/thaw cycles. The very peak of the street gable is lit with a pleasant triangular window. This window seems to be sitting on a different sill that maybe wood or concrete. The masonry around the window appears to have been done by a different hand than the rest of the house. Is this window a later addition or a poorly integrated repair perhaps?

Charles and Sarah Loring were married in 1833. The Loring’s were early settlers in North Yarmouth and that is where Charles was born. Sarah Haskell grew up in Thomaston where her family traded in timber. They had 3 children, George, Sarah, and Emma. Charles Loring died in 1856. Sarah the younger married a gentleman from Boston in 1858. Emma may have died young as there is a lack of information about her. Even her birth record is questionable. For our story, George is the person in question. After attending schools in Portland, George worked with Bailey and Noyes Booksellers until he signed onto his uncle’s sailing vessel out of Thomaston and spent several years at sea.

George returned to Portland in 1865 and re-established himself as a bookseller. He married Mary Carver of Belmont Maine in 1866. The Great Fire destroyed George and his partner, Leonard Short’s business but they rebuilt. In the summer of 1868, he and Short joined Charles Harmon to form Loring, Short & Harmon Publishers, and Booksellers. 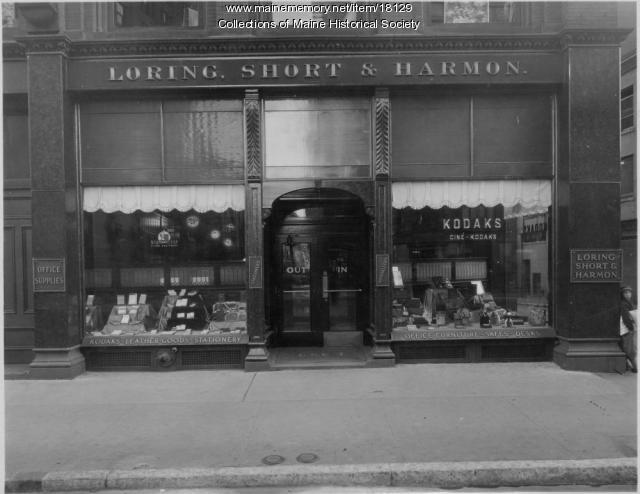 The house is quite narrow, measuring a mere 17 feet wide excluding the porch. There is a 17 foot wide by 8-foot deep ell that projects from the southeast side. Its narrow width makes it seem taller than it’s 2 and a half storeys. It is 61 feet deep making for some rather ungainly proportions. The garage dates from around 1910. The back entrance on the southeast side is an odd affair with its transom and extra width. I suspect it once held 2 tall doors as the current arrangement is obviously relatively new.

Sarah Loring lived in 44 Cedar Street until she died in 1883. By that time George and Mary were living on Pine Street in the block between State and Brackett Streets. George held onto the house and rented it. George Loring died suddenly of heart disease in Rockland on July 25, 1896. He had taken to spending winters in Barbados according to his obituary in the Portland Daily Press of July 27. Mary lived with their son Frederick until she died in 1917. They sold 44 Cedar Street in 1904.

44 Cedar Street on the 1886 Sanborn Insurance Map. Library of Congress

Samuel Knowles purchased our subject from George Loring’s heirs in 1904. Knowles was a clerk for AR Wright Wood and Coal and lived on Ocean Avenue. He rented our subject during his ownership. According to the 1910 city directory, the tenants were: 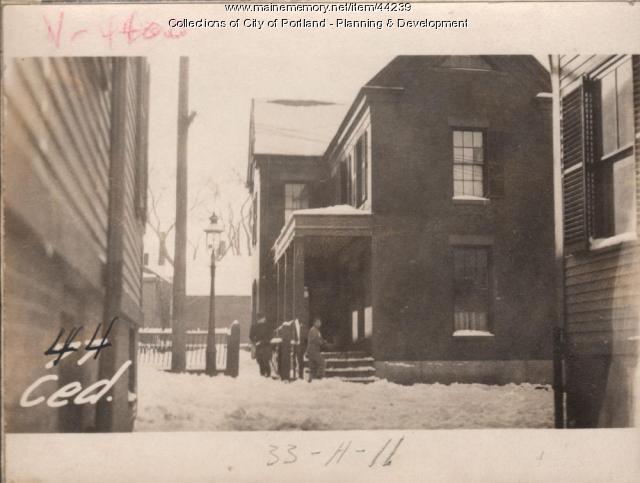 In 1921, Samuel Knowles sold 44 Cedar Street to Bagdasar, Bobbie, and Gerigos, Louie, Tavanian. As their surname implies, they were Armenian immigrants. As we have seen in previous posts, the Bayside area had by the second decade of the 20th century become a magnet for Armenian immigrants with the 1920 census showing hundreds living in the neighborhoods, Bobby came to the US in 1907 and Louie in 1914.

44 Cedar Street is currently listed as a single-family residence. Condition is good.