A pleasant, and substantially altered, Greek Revival on the harbor slope of the West End.

Once again, the publisher, pugilist, and provocateur, John Neal reaches out from the past to pay us a visit. And once again, he gives us a story of development and foreclosure. As with Mechanic Street, our story takes place in a growing part of the city although this time the intended market was perhaps a bit higher. The area was home to yeoman and mechanics dating back to the 1830s and was once dominated by Clapp & Cobb’s rope works which sat between the current Briggs and School Streets. The rope works were moved to Ware Creek in the area of the current Union Station Plaza in the late part of that decade.

Our subject area from a segment of an 1834 map of Portland. Osher Map Library. University of Southern Maine

The 1840s saw some growth, early maps and deeds noted the street as being named “Prospect” but that doesn’t seem to have been accepted by the city as it was called Salem by 1843 when it first appeared in the city directory. The area of our subject was still open land in the early 1850s. In 1854 merchant partners Nehemiah Rice and Samuel Tyler purchased the land from Judge Nicholas Emery and filed a plan for dividing it into lots with the registry of deeds. A map filed with the plan is seen below. Interestingly, the file date and notes on the map give a date in 1854 but the engineer, William Anson, dates it to 1858. Our subject is lot “C” directly across from the end of Orange Street. Neal first leased the property from Samuel Tyler for a year while he built the house. He purchased it for $400 in 1855.

John Neal was an amateur architect who was known for designing his own buildings. Although there’s no direct evidence thereof, we can surmise he designed our subject as well. What he gave us is a somewhat naive but emphatic expression of the late Greek Revival. It’s a simple 24′ x 33′ rectangle with a 15′ x 18′ ell off the northeast corner. There are 2 stories with the second floor lit by a semi-cross gable and windows in the ends. The second story gables date form after 1924 as seen in the tax photo. The Greek elements are simple but complete. The water table carries hefty plinth blocks with a delicate step molding at its top. These blocks carry paneled pilasters that terminate in some very chunky dentils. On these rest truncated, flat, Doric capitals that sharply project from the line of the wall. The pilasters support a tall architrave that is unadorned but for a strong entablature.

Absent of ownership records, determining who lived at 108 Salem Street in its first 40 years presents some difficulty. The city directories didn’t list residents by street until the mid-1890s. Prior to that, it was by name only. Combined with the city’s history of dodgy numbering systems and it requires a real dogged determination to overcome. I have been somewhat successful. The first of these tenants, from the 1856 and 8 directories, was one Thomas Barker.

The Portland Gas Light Company was founded in 1849 with the intent of converting coal to gas by way of cooking in a retort then piping the gas around the city to light the streets and, later, homes. Amongst the august names on the list of incorporators, we find Asa WH Clapp, John Poor, and Neal Dow. The company was immediately successful and expanded rapidly. When they hired Thomas Barker to oversee the operation is not clear. Thomas was born in Haywards Heath, England in 1823. He and his wife Sarah had arrived in the US in 1846 when they landed in Philidelphia. They must have come directly to Portland as their son William was born here in the same year. I suspect that Thomas was recruited for the job although I have no proof of that. They initially settled in across the harbor in Cape Elizabeth as their son John was born there in 1850.

I find these inset entrances to be very inviting. A place out of the weather to shake off the rain or snow is always welcome on the often storm-wracked coast of Maine. The door and sidelights are most certainly modern. What was there to begin with is unknown as the 1924 tax photo is too faded to reveal much detail. The treatment of the side panels and above the entry may be original. The portal is original and in very good condition. It carries all the details of the main body of the house with an extra string of those chunky dentils just below the entablature. 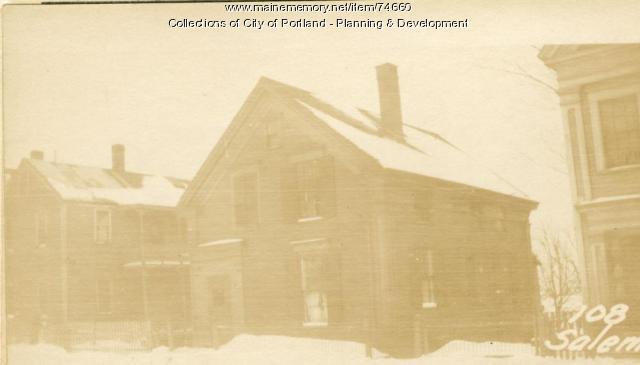 The Barkers moved to Pine Street where Thomas died in 1874 from injuries sustained in a fall from his haymow. On October 23, 1876, just like they did on Mechanic Street, the Portland Savings Bank foreclosed on our subject and took ownership of the property. They held the property until 1897 when they sold it to Edward Brown. Who Edward was is unclear but I think he was a druggist who lived in a big house on Fairmont Street. He owned the home until 1904 when he sold it to John Mahaney/Mahoney.

John H Mahoney was born in New Brunswick Canada in 1835. He immigrated to the US in 1897 and was naturalized in 1902. His naturalization ceremony was witnessed by his neighbors, William Carroll, a grocer, and William McLaughlin, a laborer. John was a widower. It would seem he moved to Portland to live with his widowed sister Johanna Leary. They were listed together on Briggs Street in 1900 in our subject in 1910 and 1920. I believe they lived on the second floor as they were listed as the second residents on the census and noted as ‘boarding’ at our subject address in the city directories. In 1900, john noted he was working as a farmhand but listed no vocation thereafter.

The windows on the first floor are deep and carry all the details of the entrance portico. The second-floor windows follow suit but are slightly shorter and seem to be set pretty close to the floor line. The current clapboards are in great shape and are laid with a very short exposure or ‘weather edge’. The colors are well-chosen but, in my opinion, the pilasters and architrave would have been better served with a light cream color.

Although he was listed as the owner in 1924, John Mahoney actually sold the property in July of 1923. According to the registry of deeds anyway. The purchasers were Bolesaw (William) & Helen Bobryk. They were Polish immigrants who had arrived in Portland in 1906 and 7 respectively. They had 4 children, Lena, Archie, Gertrude, and Harald. William was a sausage maker with Schonland Brothers on Union Street.

Bolesaw Bobryk died in September of 1932 at the age of 35. Helen remained at 108 Salem Street the children. She remarried in 1940. After her death in 1962, the children, all of whom but Archie had moved to the Washington DC area, sold the property.

108 Salem Street is listed as a two-family home. Condition is excellent