A simple brick Italianate in the Bayside neighborhood

I blame John Neal. Neal was a literary phenom in the 19th century. Noted for writing at an incredible pace, it was said he produced a 500 page novel in less than 3 months, Neal was also an attorney, art critic and booster and real estate investor/developer. His double house on State Street was built in 1836 to his own design and is worthy of its own article. It’s his real estate activities that tie him to, and cloud the early history of, 30 Mechanic Street.

The house measures 21’ x 45’ and sits on a very small lot. There is less than 4 feet from the rear of the building to the lot line. It’s built of brick laid in an English bond. The bricks supporting the bay are laid in a simple running bond. This leads me to think the bay is not original. It would be very unique in a house from 1850 as would the brackets under the entry hood and on the eaves of the front facade. The windows on the first floor have low segmental arched openings while the remaining windows have flat topped openings. Window sills and trim are wood. Other than the front facade, the building is completely devoid of ornament.

In June of 1854, John Neal took a mortgage from one Elizabeth Babcock, who was a widow living in Saco, for $1600. As collateral for the note Neal put up a piece of property on Clark Street and our subject. The mortgage was payable in 2 installments of $800. One due in 6 months and one in 2 years. Interest was to be paid quarterly but the % rate is not mentioned. The deed references a book and page for Neals purchase of the Clark Street lot but is notably missing our subject. Further digging surfaces a deed from 1840 wherein Neal purchased the property for delinquent taxes. This deed, and a couple before it, mention “buildings thereon” whereas Neals mortgage says “3 story brick building thereon”. From this, I deduce that John Neal tore down whatever was on the site and built the current house sometime in the decade of the 1840’s. I have given a date of 1850 based on my intuition more than any documentary evidence. 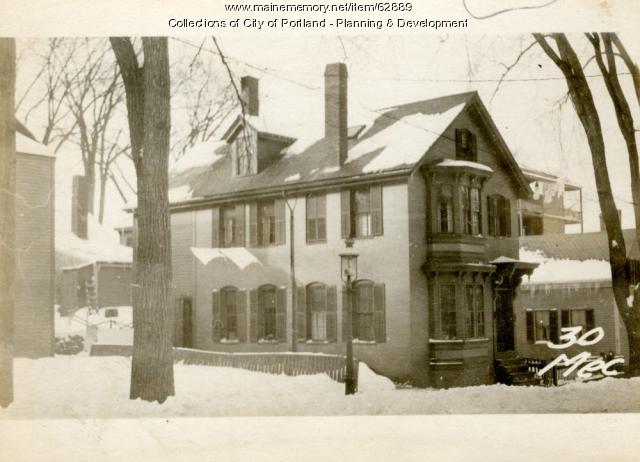 A few words about Elizabeth Babcock. She was born to Abraham and Eunice Ridlon Forskol in Saco in 1826. Abraham was a Swedish immigrant who was born in Gothenburg in 1790 and had come to the US prior to 1820. He was a master cabinet and clock maker who served as town clerk for almost 2 decades. Eunice was a descendant of Sir William Pepperell. Elizabeth married Edward Adams Babcock of Portland in 1850. Edward was a merchant who’s father, Nathan, was a long time carriage maker who lived on Green Street, now Forest Avenue. Edward died suddenly in late 1850 and Elizabeth gave birth to a daughter, Elizabeth, in early 1851. The young Elizabeth died in 1854, about the same time John Neal took the mortgage with the elder Elizabeth. Elizabeth the elder died of consumption in 1862

In 1858, Elizabeth Babcock sold 30 Mechanic Street to John Neal for $800. This is odd as there’s no record of Neal selling it to her or she foreclosing on the mortgage of 1854. In fact, that mortgage has a notation on it, signed by Elizabeth, that the loan was paid in full. In 1860! It’s possible that the note was ‘after the fact’. Regardless, the transactions of the 1850s are quite messy. And it didn’t get better in the next decade.

In May of 1862, John Neal took a mortgage for $1000 on 30 Mechanic Street from a Ruel Merrill of Cumberland. The note was due in 2 years with an interest payment to be made after the first year. Merrill was a shipmaster who, in 1860, valued his real estate and personal goods at $1800. A $1000 loan was no small amount. In June of 1864 Merrill sold the mortgage, at face value, to the Portland Savings Bank. Portland Savings Bank had been chartered in 1852 and would exist until 1983 when it became part of Peoples Savings. In October of 1876 the bank foreclosed on the property. Why a 2 year mortgage existed for 14 years is unexplained. Also unexplained is why the Portland Savings Bank held title to 30 Mechanic Street until 1917.

That 30 Mechanic Street was owned by a business for 30+ years presents some challenges when trying to determine who was living there in that period. Some of them that I have found include the Barker family, Lewis and Jessie. They had married in 1888. Lewis worked for CL Marston Gas Company on Exchange Street where the Grill Room is now located. In 1900 we find them living in our subject with 6 children between the ages of 1 and 11 years old. Also living with them is Lewis’ widowed sister Adelaide. The Barkers lived there until sometime in the teens as they were living on Park Avenue in 1920. The second tenants in 1900 were Eliza and Viva Crommet. Eliza was widowed and had moved to Portland from Canaan in Somerset county. By 1910 Eliza was back in Canaan where she died in 1912. Viva had moved to Virginia where she worked as a secretary.

As noted, the Barkers remained at 30 Mechanic Street through 1910 but the second tenants were William and Myra Moulton. They were both Portland natives born in 1876. They married in 1895 and had a son  who was still born in 1896. They were living with Myra’s family on Lancaster Street in 1900 and had moved to Portland Street by the time William registered for the draft in 1917. 1917 was also the year the Portland Savings Bank sold our subject to a real estate broker named Burton Clough.  Clough sold it 6 months later to Frederick Jerris. Jerris was an attorney and real estate investor. He is best known for hiring John Calvin Stevens in 1902 to design a cottage in Delano Park on the Cape Elizabeth shore near Portland Headlight. The cottage was built by my great grandfather and is considered to be one of Stevens’ shingle style highpoints.

Fred Jerris died in May of 1918. His will transferred all his real estate, including 30 Mechanic Street to his widow Harriet. She sold it to Margaret Joyce in 1920. She and her husband Thomas were born in Ireland, married and emigrated to the US in 1892. Thomas worked as an itinerant laborer. They had 5 children, 1 dying in infancy, after moving to Portland. The 1926 city directory shows the apartment being rented by Frank and Eva Hurd. Frank drove truck for Hannaford Brothers.

The Joyce family lived at our subject until 1945 when they sold to Harry and Kaleope Johns. The Johns were Greek immigrants. Harry’s name was Haralambos Joanen and Kaleope’s was Kaleope Patsonis. Their alien registration forms from 1940 note both came to the US in the period of 1917 to 1920. Both noted they spoke ‘Armenian Greek’. Given this information, I would surmise they were refugees from the Turkish genocides of the period when it is estimated over 1.5 million ethnic Armenians were killed or expelled. The Johns family retained ownership of 30 Mechanic Street until 1978.

30 Mechanic Street is listed as a 2 family home. It is a rental. Condition is very good. The current owners are a musician and his wife.